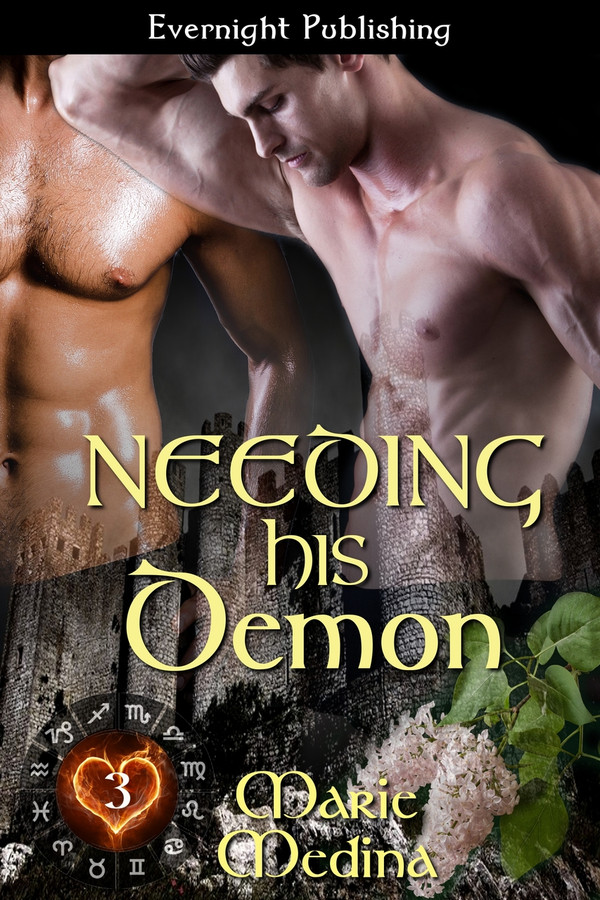 The Year of Hearts, 3

Fredric has found his mate, but he’s completely perplexed. His mate is not only a man, but also a half-demon. Fredric cannot believe the gods have done this to him. On top of this odd turn of events, Fredric is suffering from the Dissolution, a vampire disease with no cure. He knows accepting Satoru as his mate and taking his blood increases his chances of survival, yet he keeps fighting his fate, even as Satoru becomes more appealing with each encounter.

Satoru refuses to give up, and with each passing day, Fredric becomes less resistant. Fredric first agrees to drink Satoru’s blood, and then he accepts Satoru as a lover. But as time runs out and other troubles come, will Satoru be able to save his lover’s life and truly win his heart?

Fredric felt chilled, yet an odd heat filled his veins. He could just imagine the lecture Ettore would have for him if he found out about this. A gentle hand wiped a cloth over his face, and something touched his lips. The hand lifted his head and tipped some liquid into his mouth. Every nerve in his body came to life as the ambrosial liquid hit his tongue. Fredric’s eyes snapped open, and he saw Satoru sitting on the bed smirking at him and holding a vial that had obviously contained some of Satoru’s blood. Fredric’s heart raced, and he immediately felt revitalized. Fredric cursed silently, his body screaming for more of Satoru’s blood. Tremors moved over Fredric’s body as he fought to keep from reaching for Satoru. When the initial surge of emotions and sensations had passed, Fredric eased his head back onto the pillow.

“I thought that would perk you up.” Satoru put the vial down and moistened the cloth in his hand. He leaned forward to wipe Fredric’s brow again. “Am I so horrible you’d rather die than be with me?”

Fredric pushed Satoru’s hand away, even though his gentle touch felt good. “What are you doing here?”

“I stopped here yesterday to rest. I have a lot on my mind.” Satoru fixed Fredric with his calm and steady gaze. “My life has certainly never been boring. I didn’t realize the gods had something like this in store for me, though. I wonder what their purpose is.”

“The gods have no hand in this.”

Satoru smiled. “That’s your opinion. I have a theory. Would you like to hear it?”

“No.” Fredric had ingested only a little of Satoru’s blood, yet being so close to Satoru had his thoughts going in directions he wanted to avoid. Images of the man naked and pinned beneath him filled Fredric’s mind. The navy and gold clerical robes did nothing to squelch these imaginings as Satoru’s blood worked through his system. Fredric knew he needed to get away from Satoru, but he also knew he’d never make it out of the inn in his weakened condition.

That smile on Satoru’s face didn’t waver. “You make no secret of how feel about those who have demon blood. You’re a role model. Humans look to you for guidance in every way, and if you show such a prejudice, then they believe this way of thinking is justified. So, if someone like you falls in love with someone like me, a very different example will be set. Many humans will reconsider their own intolerance once you accept me as your mate.”

Just because you’re my mate doesn’t mean I have to accept you as such. “That will never happen.”

Now Satoru frowned. “Again, that is your opinion.” Satoru shook his head very slowly. “I can control my carnal needs. I would never have taken holy vows if I could not. My attraction to you could be easily pushed aside, but I feel already that it is more than that. Being a priest was my only desire as I grew up. My entire life, I have wanted nothing else. And then you came along. I cannot dismiss the desire I feel to be near you.” Satoru reached out and touched Fredric’s chest, resting his palm over Fredric’s heart. “I don’t speak of lust. I feel as if part of myself has been missing for thirty-four years. I left for two reasons. I was angry at your stubbornness and refusal to admit the truth. The rejection hurt.”

“You hid it well behind that flippant attitude and foul mouth.”

Satoru moved his hand up Fredric’s chest and neck to cup his face. “The things I said weren’t foul. They were inappropriate for a priest, but I am going to my home temple to resign. From the moment I saw you staring at my bleeding neck, I knew the gods did not want me to be a priest any longer. I wish I’d had the sense to pull you to me and force you to drink.” Satoru leaned closer. “Do you want to know my other reason?”

Fredric swallowed, still feeling very weak. The blood he had ingested coupled with the smell wafting from the cut on Satoru’s arm had him addled, need filling his body and longing filling his heart. His mind told him to pull away from Satoru’s touch, yet he could not. He longed to ask what the other reason was, but he managed to stay silent.

Satoru brought his lips very close to Fredric’s. “I wanted to see if you would chase me.”

“Well, I didn’t. I was trying to avoid you. I had no idea you were going anywhere but home.”

Satoru smiled. “No matter. Your eyes betray you. They’ve been red ever since you awoke, that brief taste of my blood not enough to quench your thirst.” Satoru licked his lips slowly. “And now they are almost black, so you can’t deny you desire me.”

Fredric tried to pull away, but Satoru held firm and kissed him. The embrace was tender and almost innocent, a simple press of lips with no demand for more. Satoru drew back and yanked open the high collar of his clerical robes. “Drink from me. I’m not stupid. You have the Dissolution. I will not let you slip away from me.”

“You think you’re that special?”

“I am your mate. My blood is the only chance you have. Even if you persist in denying your desire for me, you have other things to live for.”

Fredric managed to yank himself free, though the effort exhausted him. “The Dissolution does not always kill. I have more than a fifty percent chance.”

Satoru’s dismay and anger showed on his face as he furrowed his brows and shook his head. “I refuse to watch you suffer. You’re pale and thin and weak. You’re still the most beautiful man I’ve ever seen, and certainly the only man I’ve ever desired. If you could think for just a moment of someone besides yourself, you would see that you are causing others pain. I am trying to be patient, but I don’t like seeing you so obviously unwell.”

Fredric glared at him. Satoru’s expression of concern irked him. His criticism and the blatant declaration of attraction outright infuriated Fredric. “You have very poor standards. I know I look awful right now. You’re only forcing this because I don’t want you.”

“Then leave! Why stay with a fool? If you don’t want to see me suffer, then leave!” The harsh cry robbed him of even more of his dwindling strength. His own reactions annoyed him more than anything. To himself, he could admit that he loved seeing the priest lose his temper. The passion in his voice and the fire in his eyes had Fredric feeling short of breath. Damn. He closed his eyes and sighed.

I really enjoyed this book - even when Fredric was being a jerk, you could see him slowly softening. Satoru was irresistible, and although it took some time, his determination was enough to win the day. I liked how he could be stubborn and submissive at the same time! I also felt like even in a novella length story, you could get to know and care about these characters. Needing His Demon is a really good read for paranormal M/M fans.