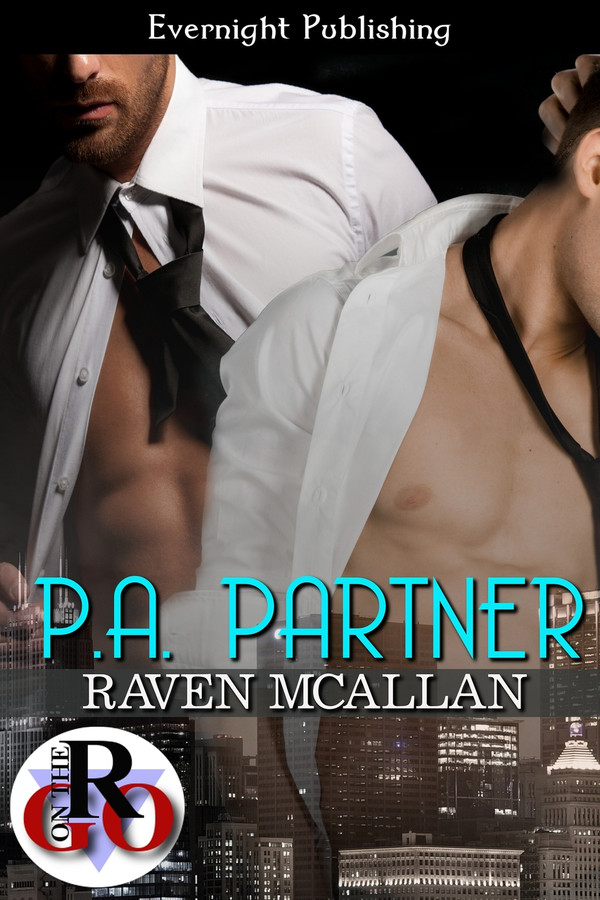 Martin has had the hots for his boss for as long as he can remember, so when Byron declares he needs a date to keep his mother off his back, of course Martin jumps at the chance.

He has one condition—he wants a night of unbridled sex with his boss. From P.A. to partner, can they make it last, or is this strictly a one time only offer?

In pure lustful pleasure, Byron watched Martin's arse clench as Martin scrambled onto the bed, rolled over and stretched out on his back with his head on two pillows. The deep golden linen was a perfect foil for Martin's dark hair. Byron wondered if he'd subconsciously chosen it with Martin in mind? The silver ring through one of Martin's nipples shouted 'tug me, pull me', to Byron as he took in the sight in front of him. Martin really did have an exceptional body. Toned, but not over muscular. Tanned but not leathery, and sprinkled with that dark hair that matched the color of the short brown hair on his head, and surrounded his prick. Byron didn't know whether to salivate or genuflect at the sight.

"Oh, very well." Byron walked slowly across the carpeted floor to the edge of the bed, and opened the cupboard placed along side of it.

He took out condoms and lube and handed them to Martin before climbing on to the mattress to kneel at Martin’s feet.

Carefully, Byron lifted Martin's legs, so Martin's heels rested on Byron's shoulders, and his ass was a few inches off the sheets. The perfect position to fill him. Then he took the condom packet and slid the latex sheath out of it.

"Next time I'm going to ask you to put this on me. This time I want to come in you, not on you, so I daren't. Will you hand fuck yourself, Mart? Show me what you like while I get ready to cock fuck you?"

Martin's eyes blazed, and he licked his lips.

"And mine." Byron rolled the condom on with more haste than finesse. His hand shook as he smothered it with lube, and guided the tip of his cock towards Martin's ass.

Martin stroked his own prick from tip to base, very slowly.

He licked his lips and moved his gaze from Byron's face, downward toward where Byron held himself almost stroking the skin between Martin's ass and balls.

"Fuck it, Martin, I'm shaking. I've wanted this for so long, and now I'm almost there I'm worried I won't be good for you. I want you so much. I'm scared shitless that I'll fuck you too hard or come like a kid in a sweetie shop."

"Nah, all at once." Byron controlled his erratic breathing as best he could and pushed against the ring of muscles that guarded Martin’s ass hole. "Sweet lord, you're so tight. It's fucking perfect."

Martin groaned. "Push, for god's sake. Fill me, fuck me, and let's both fly." He lifted his ass even higher in the air. Byron gently tugged Martin closer and slowly pushed his cock into Martin's ass. His body shook with the effort of taking time and care and not succumbing to a ‘bull in a china shop’ moment. Martin's sphincter muscles held Byron tight as he edged inwards.

"Now, got to be now," Martin almost sobbed the words, as his hands flew over his prick. "I want to come as I feel you fill me."

The panted plea was enough to convince Byron to push. His cock sank through the ring of muscles that guarded Martin’s passage and pushed home.

Martin's eyes glazed over and his breath came in jerky beats.

Byron began a steady push and relaxed, as his cock swelled and gained heat from its cocoon inside Martin. Rolls of heat pulsed through him, as his skin tingled and the roaring in his ears increased. His world shrank to the room, their breath harsh and erratic and the feel of his cock held tightly.

"Gonna come." He groaned the words as he watched Martin's cock gather pre-cum over its head. Martin used the liquid to coat his hand and then stroked one slick digit over Byron's lips. The sweet, salty, musky, taste of his lover was like Manna to Byron. He sucked eagerly, pleased to see that Martin still continued to play with himself. If that sharp up and down movement could be called playing.

Martin has sent off countless “”Dear John” letters for his boss, Byron. As his PA, Martin knows plenty of the secrets Byron has, and knows all his boss’ tastes. Buy Byron never looks at Martin as anything other than his PA, his helper. But when Byron needs a partner for lunch with his mum Martin is talked into going. When offered a reward for going along with the deception Martin decides to go for broke. He wants a night of passion – with Byron. This is a fun, fast paced short story that I really enjoyed. Even though the plot is fairly straightforward – PA lusts after boss, who returns that regard and they hook up after a long period of desiring each other – I still found this to be fairly fresh. Both men move very quickly with each other once they confess their desire. Some readers might have liked a bit more foreplay to drag the tension and chemistry, but I found myself caught up in Martin and Byron’s longing. They’d both already waited so long, why continue to deny themselves? The sex is smoking hot. I enjoyed the slight hint of BDSM and would have really liked a bit more depth to this side of their blossoming relationship. While there was talk of various BDSM elements they never actually got there “on screen”. The sex was hot and descriptive, and I enjoyed it, but think after their talking I would have found more satisfaction had it been darker, or less rushed – more how they talked to each other and built their desire up. The happy ending was, however, delightful and made my romantic side sigh with happiness. A good, short story that I greatly enjoyed.

Martin has the hots for his boss, Bryon so when the opportunity to push for more comes up Martin jumps at the chance. Martin is brave to push at his boss because it there is always a chance it ends badly. Bryon is Martin’s boss who needs a date to keep his mother off his back. I think Bryon picked Martin because he was hoping things would progress between them. The chemistry between Martin and Bryon is blistering. They also had a great friendship that seemed to go beyond a working relationship before anything sexual happened. At 34 pages, this book had a well-defined beginning middle and ending. This story was well written with interesting and engaging characters. I hope we get to see these characters again in the near future. Overall, this was a great book.

Full of heated glances, forbidden thoughts, and wishful longing, this is a fun story about Martin, the PA, lusting for his boss in what he thinks is unrequited love. Byron, a man who normally knows what he wants but has issued a no-fraternization policy after a few bad cases of lovers after him at work, is just as interested in Martin but does not dare break his own rules until… …he breaks his own rules. Ostensibly this is so he has a lunch date to keep his mother happy, but I cannot help but wonder if he was hoping for more from the start. When he kisses Martin, just to thank him, of course, the gloves come off. These men throw innuendos and challenges at each other as if there were no tomorrow. And when Martin finds out about a few well-kept secrets about Byron’s personal background…well, not even that can stop him. If you like stories with lots of heat, if you’re looking for a light, entertaining tale about a boss and his PA “crossing the line”, and if you’re in the mood for a short and sexy read, then you will probably like this short story.

Bow to Your Partner by Raven McAllan