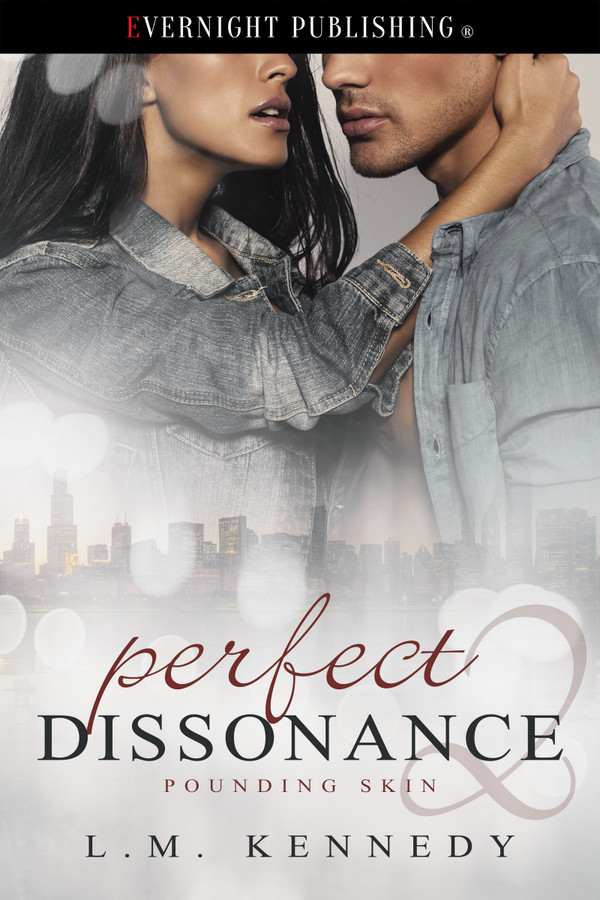 In this second installment of the Pounding Skin series, Perfect Dissonance 2 brings us closer to the identical Eden twins, Jared and Jessie, and their struggle to work through the childhood secrets that have left them scarred and broken. A truth surfaces about their abusive father that changes their entire world, but can their relationship survive the truth? Find out if the Eden twins finally find their Perfect Dissonance in this story of love and second chances.

We strode the rest of the way in silence. I didn’t trust myself to speak for fear of scaring her off, but there were a million things I wanted to say. None of them good.

As the darkness of the back hallway consumed us, we were almost at Vic’s office when she slowed and then stopped. I stood about five feet behind her.

“What?” I asked, eyeing the line of light from under the office door. Someone was definitely in there. “Why’d you stop?”

“So, here’s the thing.” She spun and looked up at me. “I want something from you first. Before we go in there.”

My stomach clenched. “What?”

She walked in a circle around me, dragging her finger along my torso and back as she went. “I want you to kiss me. Right now.”

“You’re crazy.” I turned when her voice halted me.

“Guess you don’t care about losing your contract with the Needle, then?”

She spoke quickly. “I already told Vic we were coming to see him because I had a favor to ask. He came in early today to meet with us. He wasn’t happy to do it, trust me. Guess I’ll just tell him you’re planning to take a vacation for the next few weeks and using a stand-in for the band. I’m sure he’ll love that. Who was that second-place band that could easily take your contract? Was it … Fluff? Oh yes, that’s right! Fluff! Jett would happily take over. Believe me.”

My breaths were coming in short staccatos, the frustration in my chest boiling like lava. Fluff could slide easily into our contract and the crowd would be just as happy. “This is bribery. What the hell are people going to think?” My mouth was dry, as though I’d been drinking lemon juice.

“Who the hell is going to find out, Jared? Did you even tell your girlfriend we were meeting? Does anyone know we’re here together, alone? And just imagine…” She plunked a hand on her hip and skimmed her other hand across air like she was reading a headline. “Imagine this with me … Jared Eden, forced into a kiss.” Her palm smacked to her bare thigh. “I’m sure everyone is going to think poor Jared Eden. Forced to kiss someone. Keep in mind, this is the same Jared Eden who takes great pleasure in sucking face with women in the crowd at his shows. Remember that? Remember dancing around in your underwear on stage? And the groping? So … much … groping. Hello?”

My body felt devoid of blood. “It was for the show. It didn’t mean anything. And if you believe it did, you’re an idiot.”

“An idiot? Sure.” Her shrill laugh echoed through the empty hallway. “How many guys are going to believe you didn’t enjoy it? Do you have any idea how many guys want to be you? You liked it. Admit it!”

I dug the pad of my thumb into my temple. “Things are different now. I’m not drinking. I’m … I’m with Lydia.”

“And that’s another thing. Do you think we all believe you’ve been completely changed by your pretty little girlfriend? There’s already talk out there, Jared. You were bare chested on stage just last week. Are you reverting back to old habits? Frankly, I’m hoping the answer to that is yes!”

“It’s part of the act,” I said through my teeth.

“The act. Sure. Speaking of that, since you run such a convincing act, you never answered me. Did you tell Lydia we were meeting here? I’m guessing no. And don’t think I miss how you look at me. I see the desire in your eyes.”

“I don’t look at you like that. Get your eyes checked.”

“Did you tell her? Does she know we’re meeting?”

My body went to ice and I couldn’t look her in the eye.

“Ha! I knew it.” She whacked me in the stomach. “You want to keep this secret from her. You want me!”

I should have just told Lydia. What have I done?

“Stop with the denials. I can keep secrets. Seriously. Just admit you want me and give mama some tongue.”

How the hell was I going to get out of this without completely destroying the band, betraying Lydia, or abandoning my brother? Who, or what, would be the sacrifice?

“It’s just a kiss, Jared. Come on.” She puckered her lips and leaned forward. “We’ve done a lot more than kiss. Come here!”

My chest heaved with the frustration that clenched my hands into fists. “Why? Why are you doing this? I’m trying to help my injured brother walk again. Can’t you just be … nice?”

“Oh, and I know about Jessie.” She batted her eyelashes, her voice baby like. “What an admirable thing you’re doing for good old Jessie boy. I heard what you told Harry. Such a martyr. Such sacrifice. I’m sure you won’t let anything get in the way of helping him. Of traveling with him for the next few weeks. Especially not something as trivial as this.” She wiggled her fingers. “Now, come here. Kiss me.”

I stared down the empty hallway, looking for something that could turn this around, change what was about to happen.

Hopelessness was like a suffocating, weighted blanket across my face. Before I completely blew it, I marched the three steps toward her and stopped. She glanced down the hallway, as though she had spotted someone in the main room of the bar, but when I looked it was still empty. When I glanced back down at her, she was licking her lips, and I thought I might be physically sick.

“There’s a good boy.” Reaching up, she wrapped her hand around my neck and pulled me down, turning our bodies so that we both had the wall behind us. “Now come here. I want to taste you again. I’ve waited a very long time for this.”

“You need another hobby.”

She smacked my cheek lightly and closed her eyes. “Shut up and kiss me.”

I love this book. Jesse, Mai, and Jared were amazing, love the relationship between brothers and how the struggles and the abuse they have made them strong in special Jesse. This book has angst but the romance is what you want. Kennedy, I love every second of it. I recommend it 100 % I received an ARC for an honest review.

Perfect Dissonance 2 is the second book in the duology about the Eden twins. Book one was the story of Jared, where we were introduced to the demons that drove his life to the breaking point. Book two is the other half of the coin, so to speak. In this story, not only do we get to know Jessie’s history but we get to understand the man he grew to be as well as his personal battles. I love that the stories of these men are so closely intertwined with each other but complete on their own. It was heartbreaking to revisit the abuse that the twins endured as children and to consider the harm that their childhood still has on them today. It also illustrated their fortitude to overcome as well as their strength to endure. I loved Jessie’s vitality and vigor. He has such a strong will and is completely committed to his goals. With such strength, it was very sweet to see his vulnerabilities. Especially when it came to his childhood crush, Mai. I won’t give away too many details but there is a smokin’ hot romance between the pages of this book. What I especially liked was that a person with disabilities was the focus of this romance! There was much to unpack in Perfect Dissonance 2 between the transitions of the past abuse with the current circumstances that Jared and Jessie found themselves in. I also enjoyed the focus on the sibling relationship and the struggles for them to connect as the men they had become. There were plenty of struggles and even some angst in this story but the journey itself was beautiful! This review is based on a complimentary book I received. It is an honest and voluntary review. The complimentary receipt of it in no way affected my review or rating.