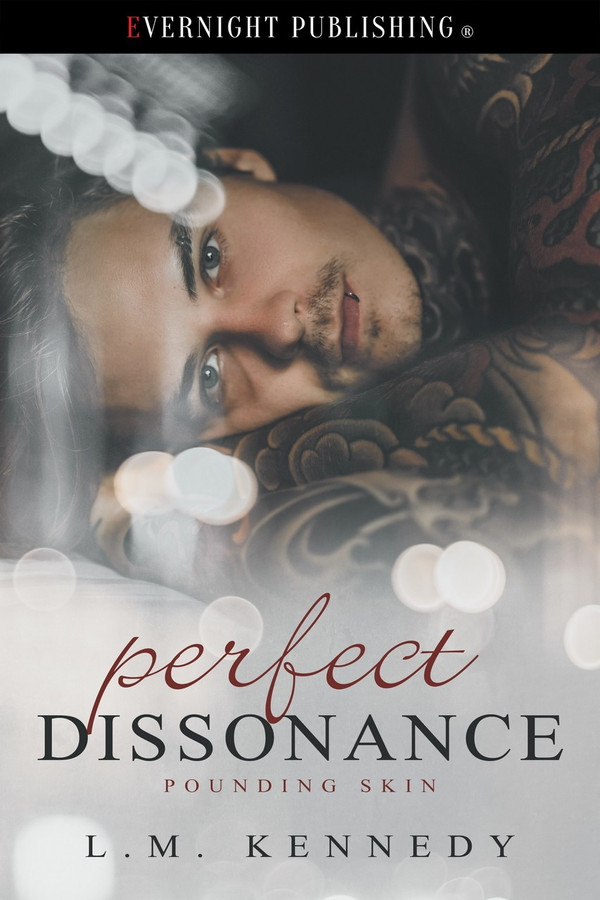 Lydia Hernandez never knew she had a thing for tattoos until Jared Eden showed up at Misty Lake Rehab Centre during her last weeks of volunteer work. The anger and sadness that emanate from Jared jolt Lydia with professional and personal curiosity. She glimpses a world of secrets that has left Jared scarred and broken.

Done with the center, Lydia heads to the Needle Nightclub and is stunned to see Jared on stage. Transfixed, Lydia soon finds herself in Jared’s tattoo chair and eventually his bed. Their connection, undeniable, their sex steamy.

Wanting to help Jared face his demons backfires when Lydia finds herself shutout. Unable to free himself from the pain in his past, Jared pushes her away. The realization that he stands to lose the one woman that he has ever loved forces him to face the one thing that has held him emotionally hostage for years.

Lowering my gaze, I spun my birthstone ring on my finger and watched as the aqua stone shimmered in the fluorescent light. Tattoos had always interested me but I’d never built enough courage to get one. Tattoos on men were sexy. No doubt about that.

“Miss Hernandez? Are you ready for your group?”

I sat bolt upright in my chair with the white-hot realization I hadn’t been listening to a word Rice was saying. My cheeks heated and all eyes in the room were on me. “Of course,” I said as evenly as I could and stood. I turned and adjusted my chair to alleviate the burning eyes of the men. “Send them over.”

Four people in the group of ten lifted their chairs and made their way over. Although I shouldn’t have been surprised, my heart leaped when Jared Eden moved with the small group. He hadn’t said one word while with Rice and was a perfect candidate for the more intimate circle. I couldn’t decide if this was a good thing.

I sat numbly, back as straight as a board, and waited for the residents to get settled. With a smile, I introduced myself and my position at Misty Lake. “Although I’m not a counselor, I’m an undergraduate assistant from the university and am qualified to lead this talk group. Today I’d like to talk about you.” I scanned the group. “Tell me anything you want. What you like, where you went to school, the hobbies you have…” I clasped my hands over the pad of paper on my lap. “Who would like to go first?”

When no one offered, I rested my gaze on Jared. “Jared.” My voice cracked and I coughed into my sleeve. “You didn’t share earlier. Tell us something about yourself.”

Leaning back in his chair, he folded his arms across his chest and licked at the ring in his lip. “I don’t want to be here. Is that something?”

I smoothed the pants of my uniform. “That’s not an unusual feeling,” I assured. “Can you tell us the circumstances that brought you here?”

He ran his fingers through the long black hair of his Mohawk and held his hands behind his head. “I’d rather not tell you the circumstances, thanks.”

Although I was used to resistance like this, I began to sweat. “Well, why don’t you tell us a little about yourself? It looks like you’re into tattoos.”

“It looks like I’m into tattoos? You think?” he blurted and laughter crackled from the group.

My cheeks burned. “Tell us about your tattoos. What do they mean?”

“They mean I really fucking like tattoos.” The other guys laughed again, but I shot them a look and they quieted after a few more snickers.

“Do any of your tattoos have special meaning?” He wasn’t going to win this one. “Are they to remember someone special in your life?”

He sat forward, elbows on his knees, fist in hand, and glared at me, expression unreadable. “Listen, lady, if you want to hear about my tattoos I’m going to have to get naked because I’m covered in them.” His eyes glinted as he stood and started to undo the tie at the waist of his jogging pants. “You want special meaning? Wait ’til you see my dick piece.” He lifted an eyebrow. “You want to see the serpent grow, baby? I gotta good nine inches just dying to get out.”

With my cheeks blazing, my armpits prickled with sweat. “Disrobing is not necessary, Mr. Eden.” I struggled to look at him and started flipping through my notepad. “A description of these tattoos will suffice. Thank you.”

Ignoring me, he continued to loosen the knot in his pants. “Guess I gotta do what I gotta do. Right, Ms. Hernandez?” He tilted his head as he spoke, eyes narrow. “The judge said so himself. I gotta come in here for a month and tell my shit to you people so I don’t end up in jail like some loser.”

I held my hand forward. “Disrobing is not necessary. Now please”—although it made my heart hammer, I held his gaze—“sit down.”

“Hey, don’t get me wrong.” He continued to fumble with the tie at his waist, ignoring me. “It’s not just about good old Judge Warren and what he wants.” He winked and wiggled his fingers in the air. “You want to see my special tattoos and it sure as hell doesn’t get any more special than the serpent.” The knot finally came loose. “My last couple of girlfriends can vouch for that.” He was having way too much fun humiliating me. “And I’ve never been one to disappoint the ladies.” He gestured to the others in the group. “Make note of this, guys. How not to disappoint the ladies when they want to see your dick piece.” He lifted the side of his shirt and started pulling his jogging pants down slowly, provocatively. I couldn’t stop myself from looking at the muscles disappearing into the gray material.

I stood and my chair skidded and fell back with a loud crash. “Take a seat right now, Mr. Eden.”

LM Kennedy perfectly captures addiction and the difficulties of relationships and forgiveness. I loved the story and was able to finish it in just a couple of sittings. I loved the character of Lydia. She was able to be there for Jared, but didn&#039;t give into him. She was able to stand on her own with ansoft side. Super loyal. Definitely someone I&#039;d want on my side if I was going through something difficult. The evolution of Jared&#039;s character was so enjoyable and believable. I personally know someone dealing with addiction and I felt like LM Kennedy captured the emotions and difficulties perfectly. Jared&#039;s story is so heartbreaking, but the ending was so satisfying and perfect. A perfect read and a really enjoyable love story for sure. I was giving a copy of Perfect Dissonance by the author in exchange for an honest review.

I received an ARC in exchange for an honest review (and it’s SPOILER FREE). This was my first LM Kennedy book and I was happy to find a page-turner with depth that was also incredibly SEXY! It didn’t take very long to see where the story-line was headed and the plot developed quickly. The book touches on a few difficult topics; the obvious one being addiction. As the story progressed, I developed more of an affection for Jared and Lydia while feeling the angst of forbidden love. I would imagine this book will bring out some tough feelings for different people. Not having experience with addiction, I was able to read Jared’s story with all the feels as it was emotionally charged and full of struggle. This story was unconventional in the sense that the main female character saved the main male character. I loved that twist from the standard romance stories. Lydia annoyed me at times, but I think her tenacity in learning about Jared’s past worked for them. There were a few parts of the book that didn’t sit right with me, but luckily the intensity of their bond kept me enthralled in the story. Lydia and Jared’s love life was damn intense! LM Kennedy sure knows how to deliver a hot and steamy romance! Definitely a book worth reading!

Perfect Dissonance by @l.m.kennedy.author was such an incredibly heartbreaking story, I loved the characters, their extremely intense relationship. The way you can be vulnerable with someone and heal. I just loved everything about this story and can’t wait to see what else she comes up with next.

Perfect Dissonance was a good read! L.M. Kennedy tells a heartbreaking story of addiction, love, healing and forgiveness. Jared and Lydia meet while she volunteers at a rehab center where Jared is patient. He is having a really hard time and Lydia is the only one who takes the time to help him beyond her job. They have a few encounters in which is awful to her but still she is determined to help him. Beyond the harsh words and arrogant actions, she sees a broken man and wants to help him heal. As much as she wants to help Jared, not only does he reject her help but she is broken too and realizes she cannot help him while dealing with her own demons and her unrelenting attraction to him. At the end of her volunteer time she leaves knowing she will never see him again. A few months later she does run into him again and again tries to hide her feelings that after all that time, hadn&#039;t subsided. Only he doesn&#039;t let her get away that easy and apologizes for who he was back at the center. His only goal is getting close to the woman who he believes saved him. During their early encounters, Jared is a complete mess. He and Lydia are on the brink of having something so good and yet he messes up pretty badly. He is haunted by his demons and can not let Lydia in - even though he may want to. Lydia was a good character for me. Although she struggled with her own things, she not only was there for Jared through his grief but she refused to take his crap and I can always appreciate a no nonsense heroine with a soft side. Clara, Lydia&#039;s best friend was probably one of my favorite parts of the book. She was a bad ass and loyal friend and brought humor to the story. I also really enjoyed reading the evolution of Jared&#039;s character. Though he was awful at times, he had a softer side you didn&#039;t think he&#039;d possess. His story was heartbreaking and I didn&#039;t expect what he had gone through but once you reach that part of the story, everything makes more sense and you are left hurting for him. My least favorite part of this story was the ending. For me, it was not satisfying and after everything Lydia and Jared had gone through, I expected more. More closure than what was given and I hope they are given a sequel! Overall, this story was a good read! It had off the charts chemistry, heart breaking stories, funny best friends and a really good love story. Worth the read!