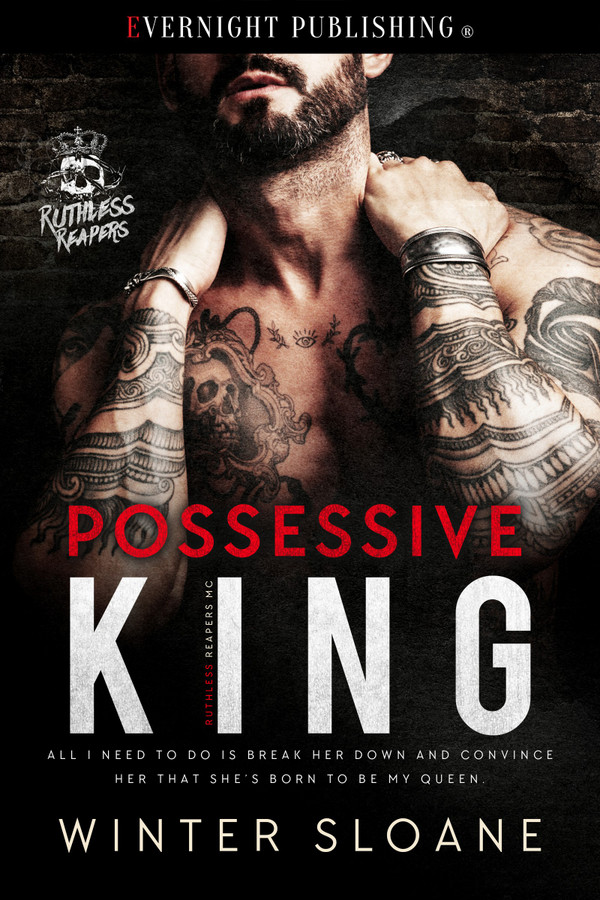 King:
Prudence is forbidden fruit. The daughter of a rival MC President. Taking her means crossing her dangerous father but I can’t help myself. When a shoot-out breaks out, I swoop in and save her from her father’s enemies. I make it clear to her that my help doesn’t come for free. This sexy, curvy beauty must pay my price. There’s no chance I’m returning her to her father. All I need to do is break her down and convince her that she’s born to be my queen.

Prudence:
My mother warned me to stay away from men like King but I never heeded her advice. I spent my entire life trying to be free of my father’s influence. Fate must have an ill sense of humor to land me at the mercy of another biker—the President of the Ruthless Reapers MC. King’s no gentleman but I find myself growing addicted to his charms. This road can’t end well, and yet I can’t seem to get enough of King.

“I heard your talk with Brick just now,” she said. She got to her feet, started pacing the room before she finally stopped and looked him in the eyes. “You can’t speak for me. I’m not your anything, King. Not your possession or some shiny object you found and decided to keep. I’m a human being.”

“True enough,” King agreed, touching her shoulder. He gave it a gentle squeeze. Prudence didn’t jerk away, but her breaths quickened. “But you’re forgetting one little thing.”

“What’s that?” she whispered.

“You owe me,” King pointed out.

She opened her mouth again, probably ready with a retort, but King beat her to the punch. “You need me. Your own father didn’t hesitate to use you for his own means. He’ll do it again. Go ahead. You’re free to walk out of that door. No one will stop you. Even Brick said you’re a liability.”

There. He said it. Offered her a way out, but she didn’t budge. That gave him a measure of satisfaction and a burst of encouragement. Prudence pressed her lips together. She knew he was right. He wondered how long she’d known her father was scum. Maybe that was why she didn’t live in the Chaos Riders MC compound, why she worked at that shitty joint.

King cornered her to the closest wall until their bodies were practically touching. Hell, but the way her generous breasts pressed up against his chest drove him mad. He wanted to rip at her clothes like a savage. To strip her and see her bared for him. Ripe for the taking. He wondered how many men she’d been with. How many left her truly satisfied. King didn’t need to take her by force. He felt her need.

She’d come to him willingly, and once she took that step, he’d own her. King would make her so addicted to his touches and kisses, to his dick. She’d never want any man but him. Didn’t Prudence realize she could be his queen if she wanted?

I enjoyed reading about King and Prudence. I always love when a strong heroine can bring a playboy down to his knees. Love how protective King is and how he treated his woman like a queen. I would have liked to see worse ramifications for Axel, but oh well ... it&#039;s good the two MC clubs merged -- safety in number and all that. I received a free copy of this book via Evernight and am voluntarily leaving a review.

What better way to start a brand new series than to give a reader all their is to love in a story! Age gap, forbidden love, obsession, action twists and turns and so much more. King is President of the Ruthless Reaper&#039;s MC and it goes without saying he has a thing for Prudence, a waitress at Ruby&#039;s Bar and Roadhouse. A bar that&#039;s in the Chaos Rider&#039;s territory. There&#039;s never been problems between the two MC&#039;s and King&#039;s hoping to keep it that way but he just can&#039;t seem to stay away from his new obsession. Possessive King is an attention grabbing read right from the start and holds you until the end. I can&#039;t wait for book 2 in this great new series.

Possessive King is the first book in the Ruthless Reapers MC series. It is gritty, romantic, sweet, action-packed and full of MC family loyalty. Prudence grew up as the daughter of an MC President, and she never knew what it meant to be first in someone&#039;s life until she met King, the Prez of the Ruthless Reapers. He is just shy of obsessed with her, and in a very good way. Ruthless Reapers MC is a series I will keep reading. Its grittiness makes the storyline and characters believable and realistic. I am looking forward to reading book number two. I received a free copy of this book via Evernight and am voluntarily leaving a review.

Biker with a obsession