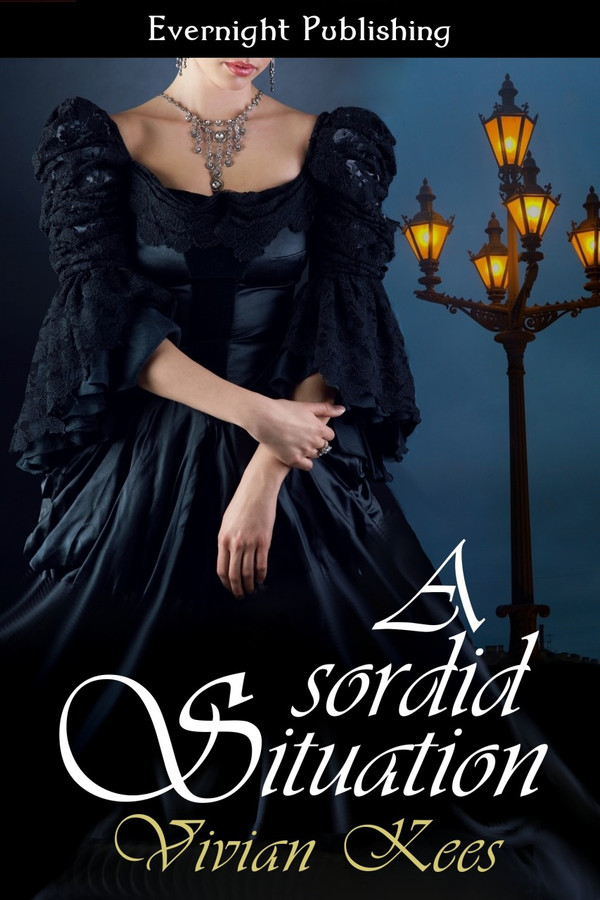 Emotion, passion and money are a dangerous combination…

Shocked to discover that her late husband gambled away their entire fortune, Eugenia Wareham is in a dire situation. When she meets Cal Hawthorne, sparks fly, and in one sweeping moment of passion, a proposal is made.

Cal Hawthorne is determined to collect on the debts owed to him. One night of ecstasy with Eugenia turns his world askew and he’s left to wonder, what is more important, reclaiming his funds, or finding true love?

His hand slid over hers. Frozen, she didn’t dare move an inch.
“I’m a married woman!”
“Widowed,” he corrected. “For a year and some now.”
“I’m still faithful to his memory.”
“I’m not asking you to be otherwise. No decent man would have left his wife in such a predicament. You’re young, attractive, and have needs. Needs that I can help take care of.”
Rake!
“I would not have you speaking ill of him,” she snapped, her temper rising. “Not in his own house.” She felt his hand tighten over hers, yet she couldn’t muster the strength or nerve to pull away from his grip.
His eyes reminded her of the sky on a cloudy day. Grey with tiny specks of amber. How unusual. She was entranced in his gaze.
Barring instinct…instinct that told her she should know better, she reached out with her free hand and caressed his cheek ignoring the urge to pull her hand away, his dark stubble tickling her fingertips.
“Your house,” she corrected, hating to admit those words.
Cocking his head to the side, he kissed the tip of her index finger and then slipped it into his mouth, nibbling gently.
Pulling her hand away in surprise, Eugenia abruptly stood, and Mr. Hawthorne immediately followed. They faced each other.
“This isn’t right. I don’t know you from Adam. It isn’t proper.”
“To hell with propriety,” he growled, pulling her to him.
His lips descended on hers, demanding her response. And for that one brief moment, she’d have given him anything. His tongue toyed with hers, playing, demanding….

She liked it. Maybe too much.

He felt her melt under his touch, her lips tender and beguiling.

Cal pressed one hand against the small of her back, drawing her closer to his person, while the other came to rest on her right breast.
“We can’t,” she said, gasping. “If someone should walk in—”
“Then he or she will get one hell of an eyeful. It’ll teach them to never enter a room unannounced.”
“That’s enough.” She pushed him away as he tried to steal another kiss. “My sensibilities are telling me this isn’t right.”
With a groan, Cal readjusted himself. Her effect on him was more than obvious. He smirked when she glanced down, and in turn, placed a hand over her mouth.
“Yes my dear, you caused that. Are you shocked? Horrified? Surely you’re not that innocent having been married to a man much older than yourself..”
She blushed. “We must forget this ever happened. It was a mistake. Chalk it up to a high state of emotions on both our behalves. In three months, I shall vacate Collingwood. That will be the last time you’ll hear from me. I won’t cause you any further trouble.”
“Then tell them. To hell with his memory!” Unrepentant anger rose inside of him, anger for a man he barely knew. How could any man do this to his wife? William Wareham knew what he was doing. He had chosen to gamble away his entire fortune and like a coward in the end, he took his own life, to avoid the consequences. And he left this lovely young woman behind to heft the weight of his indiscretions alone.
“There wouldn’t be any point. They’d simply find another way to blame me. And I don’t need that additional drama, not at this time.”
He bowed slightly. “Then for now, I shall bid you adieu.”
She turned away from him, now facing the flickering flames in the fireplace. “You know the way out.”

A SORDID SITUATION has a nice a Victorian romance feel to it, although I felt it would have been much more poignant if the story was longer. The passion between Eugenia and Cal is definitely there, and in the short time allotted their attraction is acted on in a way that romance readers should enjoy. Vivian Kees has a talent at writing historical romance and her debut is a fast and easy read. http://romancejunkiesreviews.com/artman/publish/historical/A_Sordid_Situation.shtml

A NIGHT OWL REVIEWS BOOK REVIEW Eugenia Wareham finds herself in a position no woman in her era wants to be…a widow, penniless, and about to be thrown out of her home. When Eugenia’s departed husband leaves her destitute, she finds she will now have to deal with the man who literally holds her future in his hands. What she does not expect is the instant sexual attraction to this stranger, nor his unexpected proposal that will change her forever. A Sordid Situation is by author Vivian Kees. The premise of this story is one that I have read many times and Ms. Kees manages to give it her own creative touch to keep this book interesting and entertaining. Both Eugenia and Cal’s personalities compliment each other. The common element from their past gives them common ground which is revealed after they get to know each other. This historical erotic romance will not disappoint. Stop by Evernight Publishing today to get your copy of A Sordid Situation by Vivian Kees today! http://www.nightowlromance.com/nor/Reviews/Janalee-reviews-A-Sordid-Situation-by-Vivian-Kees.aspx

I really enjoyed this novella from beginning to end. I liked how Vivian Kees brings this short story together with such good details when starting from scratch with no back story. The main characters, widow Eugenia and her unlikely love interest Cal are great for each other. In the beginning we find out Eugenia has lost everything that she has worked so hard for thanks to her deceased husband and his gambling ways. Now she is at the mercy of the man who is the new owner of her home, Mr. Hawthorne. As the time passes, Eugenia has to decide whether she is willing to do what it takes to keep her life as it is and never go back to where she came from. Which means she might have to agree to Cal&#039;s indecent proposal. It was delicious to read how Cal is affected by just the sight of Eugenia and how he behaved at there first meeting. I definitely wasn&#039;t expecting that!! Hot! My favorite thing about romance Novellas are that they get right into the relationship of the couple and I was so excited Vivian Kees didn&#039;t disappoint! Good Job!! I only wish it would have been longer. I can&#039;t wait to read a full length book from the author. http://www.bittenbyparanormalromance.com/2011/01/review-sordid-situation-by-vivian-kees.html

Hot, sexy and a winner for me, this historical had all the makings. Wonderfully written and vivid in detail, I thoroughly enjoyed the authors attention to detail and the flow of the story. It was a captivating tale of what one wants to do, should do and is driven to do. All in all I have to say it was a very well put together story with characters that were complete and a plot that was captivating. :) 17/20 8-Story 9-Presentation

Eugenia is shocked to find out her late husband has gambled away their entire fortune. Drastic measures call for drastic solutions and Eugenia Wareham needs it corrected. When Cal Hawthorne comes to collect on the property, sparks fly and emotions go rampant. In one sweeping moment of passion, a proposal is made. Cal Hawthorne has made a proposition to Eugenia. One night of ecstasy and she will be allowed to stay in her home. Cal finds out Eugenia is so much more than she appears, and when she turns his world upside down he’s left to wonder, what is more important, reclaiming his funds, or finding true love? I liked A Sordid Situation immensely even though I am not a rabid fan of historical romances. It held my attention and I found I read this in one sitting. I liked both Eugenia and Cal and was pleased that the electricity and chemistry between them was so strong. This is a short story, about only thirty or so pages, but there is a lot packed in there. The one big complaint I had about this story was that I would have loved to see it longer. I felt the relationship between Cal and Eugenia was rushed. I think Ms. Kees could have really gone in depth with the “sordid situation” between these two characters. They had only known each other for a short time when Eugenia took him up on his offer, but a day or so had passed and he was proposing and professing his love. I just found it very rushed and would have liked to have seen more. Aside from that the story was very well written and scandalous in the best of ways. I didn’t consider this an erotic story even though they were intimate, but the author gave enough details that the reader can imagine what the two main characters are experiencing. This is my first story by Vivian Kees and I plan on reading more of her work.

Though short, this story packs in everything you could need. The dialogue is great, the descriptions vivid, and the sex is spicy. Vivian&#039;s attention to detail puts some writers to shame. Can&#039;t wait for more from this author!

I haven&#039;t read too much historical romance, but what I&#039;ve read in the past has really piqued my interest in the genre. The blurb for A Sordid Situation captured my initial interest, but that first line pulled me in and kept me reading. This was a short and sweet love story that I thoroughly enjoyed. Eugenia has a past she&#039;d rather forget, but when her older husband dies, she&#039;s forced to face her demons. She has nothing left in the world, and has to hope that the new land owner will have mercy on her. Cal is instantly taken by the young, beautiful widow when he comes collecting on his debt. When he proposes an illicit trade, it&#039;s a sordid situation indeed. Will Eugenia accept Cal&#039;s tempting, but sinful offer? I was captivated by Vivian Kees&#039; writing, from her beautiful descriptions, to the way she pulled me into a different time and place. Although this was a very short read—the characters, plot, and romance were developed and well rounded without getting heavy on description or backstory. For a historical romance escape from a talented new author, I recommend A Sordid Situation by Vivian Kees.