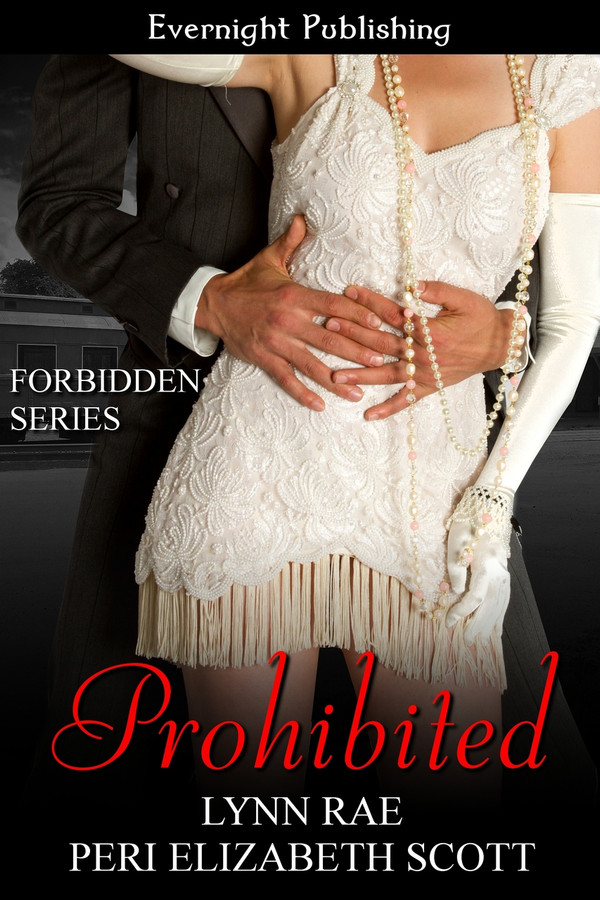 In the early 1920’s in Lima, Ohio, John MacDonald Adair hides his speakeasy from the law, and his mixed heritage from the KKK, mingling with the rich, piling up the cash and taking his pleasure within the ranks of the flappers who patronize his speak.

Lilly Townsend is a serious, modern woman, a suffragette and temperance advocate with nothing to hide and no patience for the frivolity of the times. And she doesn’t break the rules—yet.

Such disparate souls should never meet, but Fate conspires otherwise. Powerless against overwhelming chemistry, and something far deeper, Mac and Lilly must make some difficult choices and face down societal mores—together—to attain their happily ever after.

Making her way up the wide stone steps to the porch, Lilly shifted the pie to one hand and pressed the doorbell with the other. There was a barely discernible chime through the leaded glass and walnut door but no other sound. She waited and pressed the button again. The door opened with a rattle and creak.

When she recognized the person glaring at her, all the breath left her body in a gasp. It was Mac Adair. Of course. Of all the people in Lima who could have purchased this house next to hers, it would have to be that man.

He narrowed his eyes at her and propped his arm across the door opening as if to deny her entrance. He was wearing a soft-looking red shirt with far too many buttons unfastened, and sturdy black trousers. When she realized he wasn’t wearing an undershirt and she could see the tanned muscles of his chest, her arms weakened and the pie wobbled and dropped from her useless hands.

Stifling a shriek, Lilly flailed for the pan but it was too late to catch it. Spraying its contents, the pie landed on the porch with a sickening squash and the entire pastry top cracked apart as reddish goo welled up like heart’s blood. Scarlet gobbets clung to her forearms and the front of her embroidered linen dress.

Horrified, she looked up to find Mac Adair still staring at her, although his features had smoothed away from the frown he’d worn earlier. The corners of his mouth twitched with disgust or amusement at her predicament. Lilly knew her own mouth was gaping open but she was frozen with embarrassment and powerless to close it.

Stricken might be too strong a word for Mac to apply in this circumstance, but it came damn close. Perhaps another might find humor in this beauty brought to her knees by some version of slapstick, but he was mortified for her.

It wasn’t lost on him, this neighborly gesture of welcome, although no doubt she’d have painted a black daub on his door to warn others had she known he lived here after the way he’d treated her in his speakeasy. Mac fumbled for his handkerchief.

“Here, let me…” He squatted to reach out and pat the worst of the spill from her wrist then thought better of it and offered the cloth to her to apply instead.

Trembling fingers snatched it from his grasp, the slight contact sparking a frission of static up his forearm. Lil patted at the sticky fruit and flakes of pastry, lips set in a thin line as she visibly regained her composure. Not that her full, bee-stung mouth could compress into a truly regimented grimace.

“Thank you.” A quiet, dignified murmur at last. She raised her coffee brown eyes to his again, the long lashes sweeping up to unveil returning self possession. His heart pounded harder, and another part of his anatomy responded as well, refusing to listen to his brain scold.

As awkward as a boy in the company of his first crush, Mac struggled to his feet, offering her the hand not occupied with the detritus of the pie as he did so. Lil reached out to take it, and their fingers met amidst the gooey residue as he helped her up. He felt his lips twitching and registered a similar movement of Lil’s. Laughter bubbled over, a welcome warmth that enveloped his senses, and he guffawed in response.

“My pleasure to meet you, Miss Townsend. Please come in and you can freshen up.”

“I think it will take more than a mere freshen up. And it’s Mrs. Townsend, but please call me Lilly. After our two, um, disparate meetings…”

She was married? How had he missed that fine gold band? Married to that sap.

“Ah—” What in hell was that man’s name she was with last night? “So, Walter is your husband.”

“Walter? Heavens, no! My husband passed four years ago.”

The rush of relief at the news made his knees weak—he was a total bastard for welcoming such news. “I’m sorry for your loss, Lilly.”

“Thank you.” She stared at him expectantly and he shuffled backwards into the foyer. Lilly gracefully followed, only to come up short.

“Do you have a powder room on the main floor?”

“There’s a newly constructed bath just off the foyer.”

Carefully disposing of the ruined pie in his sterile kitchen, he hustled back to the porch with a rag and a small basin of water. He hadn’t cleaned a floor on his knees in, well, ever, but the flies were gathering.

When Lilly emerged, the stuff of her dress sported large, spreading damp spots tinged with an unfortunate hue of pink, the same hint of blush remained on her cheeks.

“I had no idea you were my aunt and uncle’s new neighbor.” The frost was back in her tone.

“Or you wouldn’t have deigned to make me a welcome to the neighborhood pie. Let alone cross the threshold.” Damn it, he was biting back as a dog snaps at flies.

She flinched at his comment and held her head even higher. “I definitely wouldn’t have. You own a speakeasy! Your reputation—”

“My reputation? I’m a businessman, Mrs. Townsend. I serve the public, at least those who seek my services. And if memory serves, you were in my speak just last night. How might that have impugned your reputation, I wonder? Or perhaps it reflected who you are beneath the trappings.”

If he could have ripped out his tongue by its very roots he would have done. Lilly’s breasts lifted and fell rapidly in response to his set down and he tore his eyes away from that bewitching sight to meet her very hurt gaze, swiftly being hidden by outrage and disdain.

“I know who I am beneath my trappings. Mr. Adair. Who or what do you hide behind yours? My slight lapse in judgment last evening, correction, serious lapse in judgment won’t be repeated. Of that I can assure you!”

Hell’s teeth, she was lovely! All flashing eyes and high color. He couldn’t resist pushing her harder.

“I knew my first impression of you was correct.”

She sputtered. It was fascinating to observe, those succulent lips parting with fury.

“If you consider calling me priggish and straight-laced an insult, sir, you’re sorely mistaken. I’m simply fine with your assessment. At least I’m contributing to the moral compass of this world, unlike some people who undermine the very fabric of—oomph.”

It was just too much. Too much of everything. She had slipped a verbal dagger between his ribs and pierced his conscience. Coupled with her intense appeal, he felt pushed over the brink and reacted to both quiet her and soothe his abraded soul.

Her wealth of hair spilled from its gathered twist on the back of her head as he pulled her roughly into his arms, soft curves imprinting against his chest. He caught a glimpse of her wide, startled eyes before taking her mouth with his own in fierce possession, plundering the seam of her lips. Groaning with the effort of suppressing his lust—he longed to sweep her up and carry her into the parlor where a fainting couch reposed—Mac contented himself with kissing them both senseless.

Lynn&#039;s attention to detail makes for an exciting read. So many secrets! You&#039;ll have to read it for yourself! Lynn is quickly becoming one of my favorite authors.