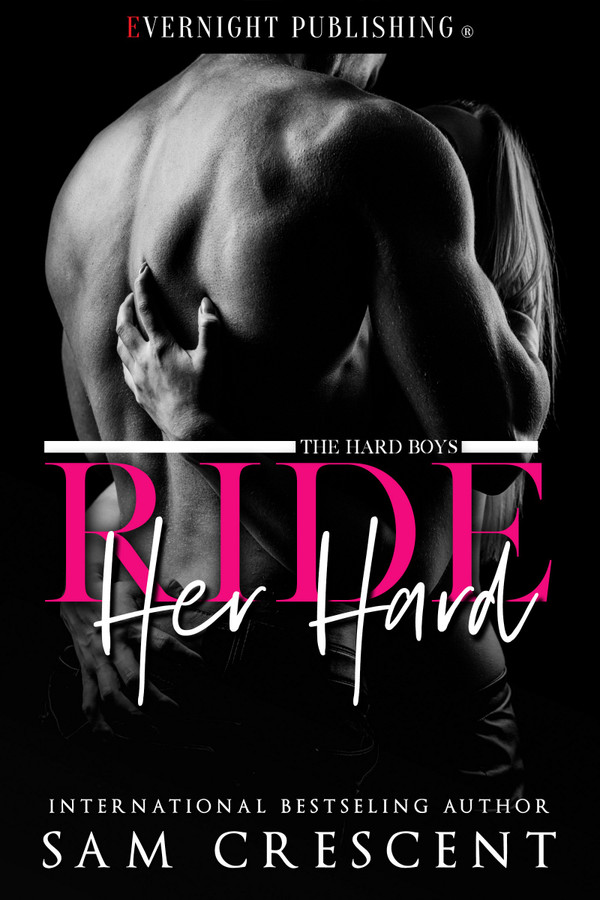 Twelve years ago, James Hard made a mistake. He never asked Eliza to go to the prom with him, losing his chance with the curvy blonde. She left town for college and the big city. Now she’s back, and he’s not about to let her slip through his fingers again. She will belong to him. However, when he knocks her over with his bike, he doesn’t know if he stands a chance.

Eliza remembers the Hard Boys’ reputation and she’s not interested in being another conquest, at least, she doesn’t intend to be. They’re older now, wiser, and being in James’s bed is better than anything she could ever imagine.

He’s not like his brothers. James wants more—forever, but he doesn’t know how to get it without chasing her away.

Once he was parked, he got out of the car, and together, they walked inside his home. He closed the door and pressed her up against it, sinking his fingers inside her hair, kissing her hard, and plunging into her mouth.

She ran her hands down his back, cupping his ass, and moaned as he broke from the kiss, trailing his lips to her neck, sucking on her pulse.

He reached for the clasp to her dress and pulled it down, wanting her naked. Needing her body pressed against his. Together, they tore at each other’s clothes until they only had on their underwear. Picking her up in his arms, he cupped her ass and walked upstairs, heading toward his bedroom.

“You need to stop carrying me.”

“I’ve got no problem with you in my arms.” He gave her ass another squeeze. They made it past the stairs and he heard a male throat clear.

Eliza let out a gasp and buried her head against his chest.

“Yep, I decided to crash here.”

“Caleb and Rome.” He felt Eliza laughing against his chest. “Well, you know where everything is so, go about your business.”

He walked into his room, kicked his door closed, and dropped her to the bed, falling on top of her, but making sure she didn’t take all of his weight. She was laughing as he stared down at her.

“As you can see, there’s a problem with having brothers. They invade your space all the time.”

“Do you want me to take you home?” he asked.

There was no denying Eliza was a little embarrassed by what had just happened. It wasn’t every day you were carried to bed in your underwear, about to have wild hot sex, and you encounter your date’s brothers. It would be easy to go home, but she didn’t want to.

“Your brothers aren’t gossips, are they?”

“No. I’d kill them if they even breathed a word.”

“This is your home.”

“And I’ve had a really good night.” She ran her hand down his body, cupping his dick through his boxer briefs.

“I don’t have a problem with them. I won’t be thinking about them with you inside me, James. It will all be you.”

He took possession of her mouth and she moaned his name, gasping for more as he spread her thighs open. She tugged his underwear out of the way to hold his thick length. He was so hard and she wanted him inside her.

I read this book and immediately thought two things. I want to belong to this family and where is the rest of the series so I can read it...now. I love how once Eliza showed back up in town, there was no way James would let Eliza get away from him now. He is everything a book boyfriend should be.

Good book for the start of a new series. James missed his chance in high school with Eliza so she went to college. Now she&#039;s home he isn&#039;t letting her slip away again. Good short read.

What a totally amazing read!! I just absolutely loved it from beginning to end! I can&#039;t wait for the next book to come out! A definite must read! Happy Reading!!! :)

This is the first book in a new series for Sam Crescent. I really enjoyed this as there wasn&#039;t a ton of drama like with some of her other books. James has wanted Eliz since high school but he was scared to speak up and she left town after high school graduation. Coming back to help her Aunt Betty, They find each other again when he literally runs her over!! LOL What follows is a cute story of him trying to get her back in his life. I loved Aunt Betty and James&#039;s parents and brothers. Wonderful story and I&#039;m really looking forward to his brother&#039;s stories!!