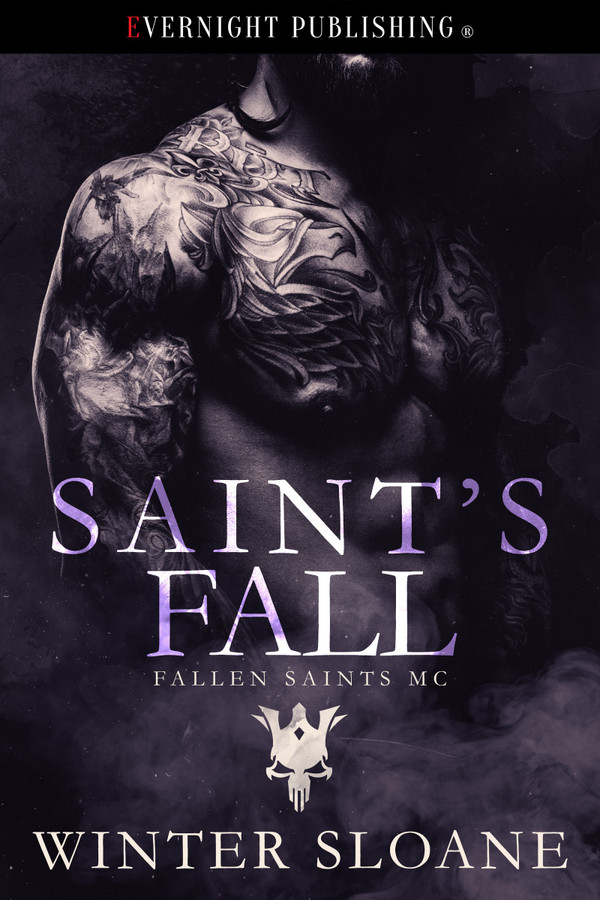 Saint is many things. President of the Fallen Saints MC. Killer. Sinner. Father. Brother. Love’s not in the cards for men like him until she comes crashing back to his life. Olivia’s the one who got away—his sassy, curvy brunette. His queen. A decade ago, she’d been too young for him. Too tempting to ruin, too innocent to claim as his own. The woman she’s become is intoxicating and he can’t seem to stay away. Sooner or later, she’ll become his.

Ten years can change a person. Olivia couldn’t wait to escape her hometown, to leave the man who tore her heart to shreds. Saint’s merciless, hard and cruel. He’s certainly not husband material but Olivia finds it hard to look away from his penetrating steel gaze. Besides, she’s desperate. Saint’s the only man who can save her from the chains of her past. Will he demand her heart as payment?

“Fancy seeing you here,” he said.

Olivia halted, staring at him, shock imprinted on her features. “How did you get there?” she demanded, looking from the bar and back to him.

Saint crooked a finger at her, and they stepped to one side as a group entered O’Riley’s.

“You haven’t answered my question,” Saint drawled. He took out a cigarette stick and lit it. He wouldn’t offer her one, but he didn’t think she smoked.

“I don’t owe you any answers.” Olivia bit her lip as if she suddenly regretted her response.

Saint studied her under the yellow glow of the fluorescent lights. The years had been good to her. Her long, brown curls were tamed into a single braid that fell over her shoulder.

Saint wanted to tug the band off and free all that glorious hair so he could wrap it in his fist. He’d tilt her head back and finally taste those luscious lips. She tasted like raspberries, he remembered. Would she still taste the same?

What a pity she wore that ugly and oversized sweater that concealed her glorious curves. Still, he could make out the generous swell of her breasts. Her legs looked amazing in the skinny jeans she wore. He licked his lips. Here he was, looking at her like some kind of savage who could barely control himself. An animal. Saint underestimated the effect she had on him.

She hadn’t told him to go screw himself despite the fact she had every reason to. They parted on angry terms, all those years ago. She had screamed out his name with obscenities after he kissed her and rode away on his Harley.

“Let me guess. You need something from me?” he asked.

It was a gamble asking her that outright. When she dropped her gaze, Saint knew he hit the jackpot. A blush filled her cheeks and neck. He could tell she was ashamed, although she had no reason to be.

Folks generally went to him if they had problems they thought he and his club could take care of. Another man might’ve been disappointed, but not he. Saint was fucking pleased. Olivia could’ve walked away, but her need proved greater.

Perfect. Saint would have plenty of time to make up for his past mistake. Olivia hadn’t returned to his life by sheer dumb luck. She came to him because she needed him. That was fine. For now. Sooner or later, Saint would wrap her around his little finger.

He’d make sure she’d craved only him, no other man. Olivia would be so addicted to him, to his touches, to his kisses and dick, that she’d never think of leaving Redemption again.