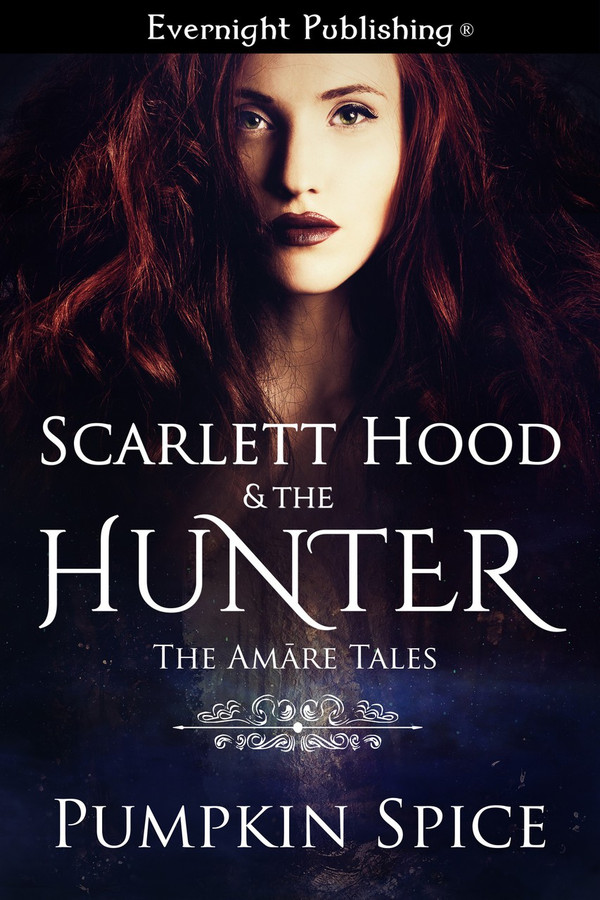 In the merry village of Amāre, love isn’t just the town’s namesake—it’s a way of life. When Scarlett Hood discovers that her grandmother’s retirement fund has been targeted by the wolf of Wall Street, Bernie Wolfe, the photo journalist realizes she will need more than her telephoto lens to take him down. She’ll need help.

Help arrives in the unlikely Jack Hunter, the local bean farmer, who struck it rich only to lose his golden crop to Wolfe. Now working for the Security & Exchange Commission (SEC), Jack is on the hunt to bring down Wolfe and Giant Investment Services. Nothing—not even his unbridled attraction to Scarlett—will keep him from tackling the man who stole his grandmother’s land and put him out of business. Can Scarlett Hood and Jack Hunter team up together to bring down one of Amāre’s worst villains and find their own happily ever after?

I clapped my hands together and practically scared Scarlett into a sitting position. “Okay, so I guess it’s time we get you cleaned up.”

She shook her head, and a mess of crimson spirals moved haphazardly across her fair face. “Oh, ouch.” She reached up and touched the back of her head.

I was instantly at her side. “Lie back down.” She gently slid on the couch. “Crap. Maybe you have a concussion.” I looked behind me at the front door, but I knew Granny had already left. I carefully sat beside Scarlett and moved a wayward lock away from her face. I leaned over and started feeling behind the back of her head. I felt her eyes on me as I groped her head like I was checking a watermelon for freshness. I really wasn’t sure what I was doing because suddenly touching Scarlett sent my senses into overload. Her hair was soft and silky between my fingers. I slowed down my rhythm and gently massaged her scalp. A low murmur escaped her lips. I quickly glanced at her, and her eyes were closed. I wanted to lean over and kiss her perfectly plump lips, but I returned my focus to her head where my hands wove through her wild hair that was a wonderland of richness. Even though she was soaked in wine, her head smelled like lavender. Now when I looked again at her, she looked up at me and smiled.

“I don’t feel any bumps?” I asked as more of a question than a statement.

Scarlett’s deep, husky laugh rose to my ears like an aphrodisiac that sent a signal to my brain and straight to my jeans as if she had suddenly cupped my cock. Her laughter was that enticing. It spiked a primal desire to have her beneath me with her mouth wrapped around my cock, which was beginning to grow as fast as my field of bean stocks.

I quickly shook my head and jerked away from her as if from a hot flame. “Yup,” I said brushing my hands together and trying to shake free from the heat that radiated between us. “I think you’re A-okay. Okay-dokay.”

She looked up at me, and her faint green eyes questioned me. “What happened?”

I shrugged. “Nothing. Just taking Granny’s orders to get you cleaned up. So let’s get moving and get you ready.” I hiked my thumb toward where I imagined the bathroom was located. “I’ll start the shower, run a bath, or grab a bucket of water from the well.” I scratched my head. “I’m not sure if there’s running water out here. But no matter.” I snapped. “I’ll do whatever it takes.” I pointed to Scarlett. “To get you freshened up.” Who am I? I sounded like some jingle writer for a feminine hygiene commercial.

Scarlett shook her head. “But Granny won’t be back for at least an hour.”

I nodded. “Yes, but she left me in charge to get you cleaned up.”

Scarlett slightly raised her hips off the couch, and her yellow skirt fell forward to reveal sheer panties that were streaked red. But even stained in wine, it was clear to see that Scarlett was a true redhead.

“I don’t think I should move in my condition,” she said with a coy look on her face. “Could you help me, Jack?”

I swallowed hard and looked at the tiniest, barely-there V-shaped panty that was held together by thin, pink, spaghetti-like straps that hugged Scarlett’s narrow hips. I wanted to gnaw them off with my teeth to get to the strip of hair that was tucked beneath the sexy sheer. Instead, I held Scarlett in my gaze.

“Maybe you hit your head too hard?” I said trying to maintain some semblance of control, trying to be the good guy, trying to remember that we just met. Trying to get a handle on a situation that was suddenly moving too fast, too soon, and yet felt so right, which made no sense at all.

Scarlett rolled her head from side-to-side. Locks of her hair swayed in a truly mesmerizing, hypnotic fashion. “Jack, Jack, Jack. You over-think things way too much. If this Wolfe guy really is so bad and I really was in harm’s way then you just came and rescued me.” She looked up at me, and in that look I could have shot my load.

“Shouldn’t we be living in the moment?” Her voice dripped with sex appeal, and my mind and body stopped working together. “Shouldn’t we forget what’s behind us and start moving forward? I’m not usually this way, but tonight hasn’t gone anywhere like I had planned. I met some Wolfe in the woods. I knew he was bad news, I knew that, but I didn’t listen to my gut.”

For a moment anger flashed across her face. “I should have listened to my first instinct. But I didn’t.” She shook her head. “I did what was expected of me. I shared my dessert. I played nice.”

Her hands were in her lap, and she opened them like she was releasing a bomb. “And then because of my kindness, I got knocked out by you, and now you tell me that Blue may have lost everything?” Her voice dropped like she was about to cry. “If we can’t save what Blue lost…”

Scarlett placed both of her hands over her chest, and in that moment I could tell that what she needed. What she wanted wasn’t necessarily me, but some retreat, some reprieve, some form of escapism from everything that had just happened. And if I could give her thirty minutes, though I hoped much longer, of total release, what was the harm?

“I didn’t hit my head too hard,” she said. “But I am having a difficult time getting up off this couch because I’m feeling a bit dizzy.” Her tone started to shift. “So I was hoping that maybe you could help me?” She leaned on her elbows and partially unzipped her gray hoodie. “It’s really wet and uncomfortable.” She looked up at me, and I knew it was my last chance to give her something I’m sure she never asked for and never had to ask for. “Could you help me out of this?”

I knelt down in front of her while she lowered the rest of the zipper. Perfectly plum-shaped breasts, which strained against what was once a white, lacy bra that was now streaked with merlot, greeted me when I carefully reached for her arm. She turned toward me, and her left breast practically popped in my mouth.

She wiggled out of her hoodie and dropped it to the floor. “Are you good at unclasping a bra?”

I could no longer speak. My hands found their way behind her back that was caked with dried wine, and with a flick of my wrist her bra released in my hand. She slid out of it, and her breasts fell out of their constraints. I was there to cup them in my hand. My thumb circled her nipple until her back arched and low moans drew from deep within her. I circled the other nipple until I thought she would explode.

“Oh, Jack.” Her head leaned back against the couch, and her nipples were erect with pleasure. I suckled on them volleying my attention back and forth just enough to tease and titillate without numbing the sensations. It was a fine balance and one that I prided myself on mastering. If this was our only moment together I wanted to savor every part of her succulent body. And her breasts were a magnificent feast.

This book had such vibrant fun characters and wonderful prose. A real page-turner for me. Add in a little spice and it was a very enjoyable read!

This genre is not what I usually read, but I&#039;m looking to expand my reading horizons, so some friends recommended this book. I enjoyed the mysterious aspects and the &quot;twist&quot; on a famous fairy tale -- great fun! I also enjoyed the strength of the primary female character. A delightful, suspenseful read, and for those who do enjoy erotica, that added romantic element will be appealing.

A delightful distraction. I hope there will be many more. A good airplane book, especially since it is on Kindle.:)

A quick and effective escape into happily ever after with Wolfe, Hood, Hunter and an array of fairy-tale type characters that add an offbeat twist to this short sexy novel. Pig Brothers Construction, Giant Investment Services, Gepetto - not your average puppeteer - and others of the Dark Forest provide a heartwarming story of community and caring as well as the backdrop to a hot and heavy romance between two unlikely characters. Fairy-tales will never be the same!

Scarlett Hood &amp; the Hunter was a very quick and enjoyable read. I imagined Scarlett as a woman in her twenties with her sassy attitude. She had a sexy ora that surrounded her quickly drawing Jack into her life. I loved the fairytale references. I actually laughed out loud at many of them. This was a fun read with just the right amount of drama and steamy scenes! I can&#039;t wait for what Pumpkin Spice has next!

Sensual, smart, desirable... all the things you want to see in a heroine. Scarlett Hood and the Hunter is a must read for those who enjoy erotica romance. Caution, don&#039;t read this at work during your lunch hour or there may be more cream than just for your coffee!

Once upon a time...there was desire! Ms. Spice&#039;s &quot;Scarlett Hood &amp; the Hunter&quot; was gripping from the get go, had fun twists along the path in the Dark Forest, and was HOT. Scarlett is a strong, fast thinking heroine who has Jack captivated from the beginning. Jack is one sexy alpha that is righting a major wrong that was done (and continues) in the small village of Amare. This story had all the makings of a fun, quick escape and it definitely delivered. I look forward to reading about more characters in the village of Amare and more from this author!

If the cover doesn&#039;t grab your attention, the writing will. Let&#039;s start talking about romance books that take chances. Begin with a classic tale, give it a twist and you end up with &quot;Scarlett Hood &amp; The Hunter&quot; a modern-day fairy tale where the heroine doesn&#039;t need saving and the hero is heroic enough not to. The humor between Scarlett and Jack is fast, quick and will keep you on your toes. The plot to bring down the Wolfe of Wall Street will keep you engaged. But the Queen of Spice is at her best when things heat up between the two unlikely lovers that will make a reader glad they entered the dark forest. Looking forward to more Amare Tales from this new author from Evernight Publishing.

Goldie Locks and the Three Brothers Bear by Pumpkin Spice

The Hart Moment by Pumpkin Spice