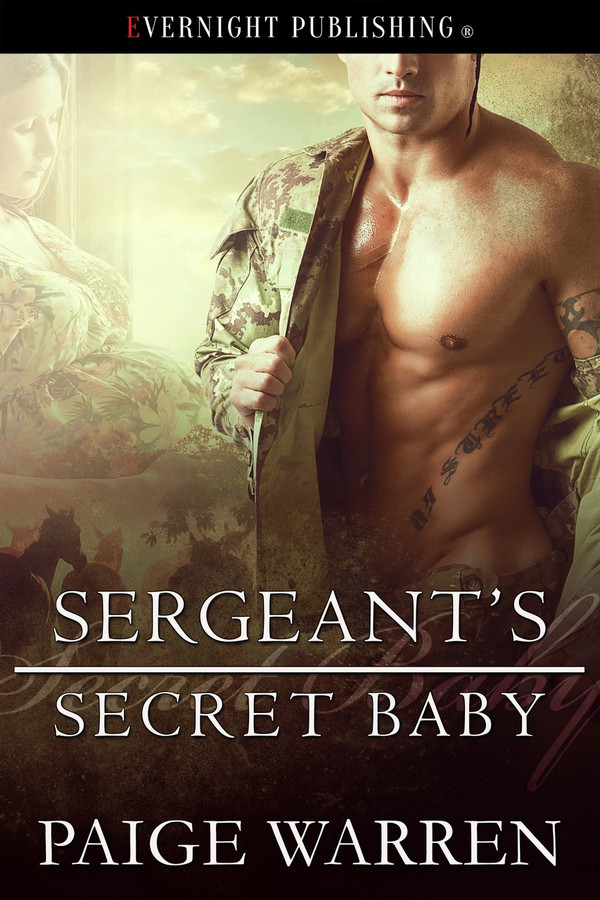 When Shiloh Anderson’s ex left her stranded in a bar, with no clothes, no car, and no money, the last thing she expected was to have a one-night stand with the sexiest man she’d ever seen. But the soldier left more than just a lasting impression with her, he left her pregnant.

Sergeant Drake Edwards is a lot of things, but he’s never been an asshole. Until the nameless woman from his one-night stand sends him an email claiming to be pregnant with his baby. Demanding a paternity test seemed reasonable enough to him, but he didn’t count on how damn stubborn she could be.

When Drake is injured and is forced to return home, he’s brought face to face with Shiloh once more, and her beauty nearly takes him to his knees. Facing death changes a man, and Drake is determined to do whatever it takes to claim his baby – and the woman he can’t stop thinking about.

Shiloh pushed open the door to the first bedroom. She flicked on the switch, winced at the bright light, and immediately shut it off. Stripping out of her boots and clothes, she face planted on the bed, bare-assed as the day she was born. After a bit of wiggling, she managed to pull the covers over her and curled up in the center of the queen-size bed. It had been a long time since she’d had a bed to herself. Maybe if she weren’t completely plastered, she’d have enjoyed it a bit more. Of course, now that jerkwad was out of her life, she was going to have tons of time to sleep by herself.

The alcohol-induced haze made her feel like she was floating, drifting on a cloud. Her stomach no longer felt queasy. Shiloh closed her eyes and dozed. A while later, she thought she heard a noise in the room, but dismissed it as her imagination. Dallas had said she’d probably have the place to herself. And she’d remembered to lock the door. She sighed and rolled over. When the bed dipped, she bolted upright, clutching the blankets to her chest.

“Hello?” She tried to see in the inky darkness, but could only make out the shape of a man. Oh hell, had she picked the wrong bed?

There was a click and a lamp turned on. She squinted until her eyes adjusted. The man sitting beside her was even larger than his brother, and she hadn’t thought that was physically possible. Dark hair was buzzed short, and his profile showed a strong jaw and long, straight nose. There was an Army tattoo on one bicep. His broad back was toned, and his arms looked large enough to break someone in half. Or cuddle them really close. She gave herself a mental slap. When his blue eyes focused on her, her tongue stuck to the roof of her mouth. No one had ever looked at her like that before.

“Looks like my brother got me a going-away present after all.” Appreciation lit his eyes as he scanned her.

“No? Well, sweetheart, I can’t think of any other reason for a naked woman to be in my bed.”

“I picked the wrong room,” she mumbled.

He gave her a sardonic smile. “I know for a fact Rebecca wouldn’t approve of Dallas sharing his room with any naked women except her. So, if you were looking to trap him in some way, you picked the wrong mark.”

The man turned and braced his hands on either side of her hips, leaning in close, his lips nearly brushing hers. “What I think is that your plan isn’t going the way you’d thought it would so you’re making up stories. But I’m a pretty nice guy. I’ll give you thirty seconds to get that sweet ass of yours out of my bed, dressed, and the fuck out of this apartment.”

She licked her lips and didn’t move.

“Or, if you’re still here in thirty seconds, I’m going to take it as an invitation and see if those lips taste as sweet as they look.”

Her eyes widened. He wouldn’t really kiss her, would he? She trembled a little at the thought of the powerful man caging her in putting his lips on hers. The thought of his hands on her body… Heat flushed her cheeks and spread down into her chest. She wasn’t seriously considering sitting here just to see if he’d really do it, was she?

Her lips parted, but before she could utter a word of protest, his mouth pressed against hers, his tongue invading and tasting. Oh Lord! Shiloh had never been kissed so thoroughly before. His expertise was enough to make her weak-kneed and ready to beg for more. Her body burned and she dropped the blankets to reach for him. As he pushed her back against the bed, she became acutely aware of the fact he was just as naked as her.

Was she really about to have sex with a complete stranger? She didn’t even know his name!

He trailed hot kisses down her neck, giving her ear a nip. A shiver skated down her spine as her nipples puckered. Oh, hell yeah! He can do whatever he wants to me.

Sergeant’s Secret Baby was a wonderful book that had me captivated from page one. Life had taught Shiloh Anderson some very hard lessons. When her bad news boyfriend ran off with everything she owned and left her stranded in small town bar that was when things started looking up for this very independent girl. She found herself befriended by a friendly bartender and then knocked up by his sexy Army Sergeant brother after a smoking hot one night stand. Drake Edwards didn’t forget the mysterious beauty he hooked up with the night before he shipped out to complete his last tour of duty. However, he was stunned when she contacted him a few months later to break the news that he was about to become a daddy. He did not take it well, at all. He made a big mistake that would later have him working very hard to earn Shiloh’s trust. This book wrecked me. It was heartbreaking in that I could feel Shiloh’s frustration as fate seemed to be conspiring against her. She had nearly given up on anything good ever happening in her life. She faced blow after blow and still worked so tirelessly to provide better for her baby. So when Drake came back into her life and wanted a relationship it really was nearly impossible for her to put aside her pride and accept his help. For his part Drake was actually a good guy which in the beginning it didn’t look that way. He was relentless in trying to do right by Shiloh and the baby. I loved this story. The writing was perfect as the author unveiled a believable relationship that began in lust but then gutted my emotions as the she provided a window seat to watching this couple slowly take that fall into love. I will be recommending this one to all of my friends.

I had a huge smile on my face when I finished this story. I&#039;m a great fan of secret baby stories when they&#039;re done well, and this one certainly is. You can&#039;t help but root for the heroine and fall in love with the hero, as he tries his utmost to make up for his initial reaction to the news he&#039;s about to become a father. I even loved that knee jerk reaction. It was very real, if you ask me, and I think that made this story for me. As a reader, I really connected with the characters and the choices they make. Especially the heroine&#039;s . She was so determined to do things her way and at the same time to do the best she could for her baby. Yet she wasn&#039;t too stubborn to realize when she needed help and to ask for it. Simply great story telling. :-)