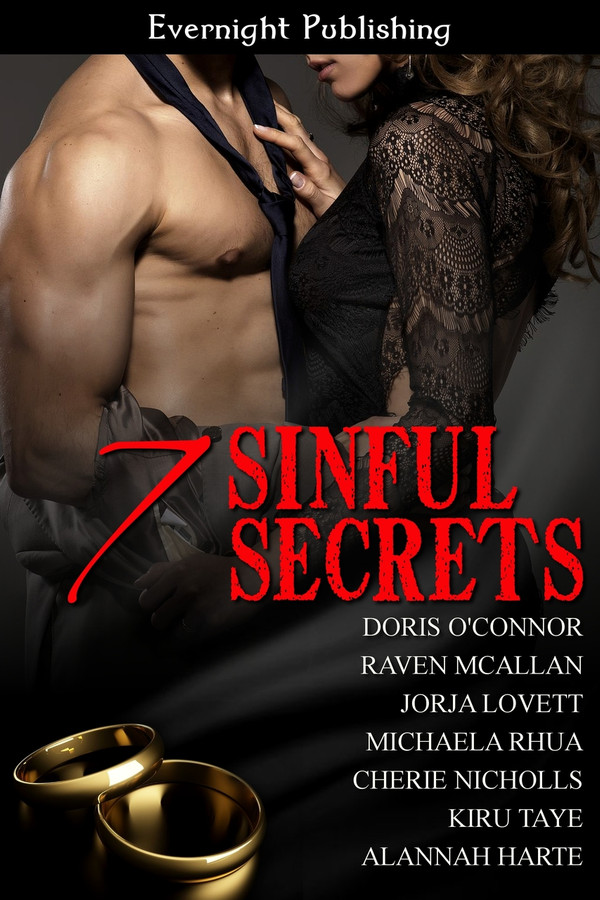 Marriages shouldn't have secrets, should they? Follow our seven couples as they come to terms with the fact that their partner has been holding something back from them. Will it make or break their relationship? Read on to find out, and have your fan at the ready, because these secrets are hot!

He had to be hearing things. She could not mean what she had just said. However the short bursts of her warm breath against his neck and the hardness of her nipples against his arm confirmed the truth behind those words, as clearly as the musk of her arousal. There was no doubt in his mind that she would be wet for him. Her body gave her away, as surely as his own responded to her. The dominant in him rose to the fore, and he halted the upwards progress of her hand with a growled, "No."

She froze, and he fisted his hand in her hair, pulling her head backward to enable him to study her face. Stefano lost himself in the tender and hopeful expression mirrored in her beloved features, and he kissed the tears still clinging to her eyelashes away.

Mareijke sighed in submission, and he smiled into the kiss he slanted across her lips. How he had missed her, the simple act of kissing, tentative strokes of her tongue matching his forceful ones, as he took the kiss deeper, angling their bodies until she was lying underneath him on the bed. He yanked the cushion still between them away with an annoyed growl and thrust his frill covered cock into her groin. She gasped into his mouth and clung onto his shoulders. Arching her hips to meet him thrust for eager thrust, she locked her ankles behind his ass, and Stefano grunted his approval. This is what he needed, this reassurance that she still wanted him as much as ever, and suddenly he couldn't wait anymore. He wanted her bound and naked, the silky walls of her tight pussy milking his cock, as he fucked her hard and fast.

He broke the kiss with a bite to her lower lip that made her squirm, and he cupped her mound. The damp fabric made him smile almost as much as her hiss of pleasure when he pressed against her clit. A shudder went through her, and her eyes went wide when he straddled her legs.

"Grip the headboard for me, and don't let go."

She complied immediately, and he grabbed the ends of her sensible blouse and yanked hard. Buttons popped and fabric ripped as he pulled the thing clean off her, and his breath stalled in his lungs at the vision in front of him. His wife's ample breasts were barely concealed by the scraps of red lacy scaffolding covering the heavy mounds, and he ran his knuckles across the hard nubs clearly visible through the see-through fabric. They firmed even more, and she arched into his touch. Her little teeth made imprints on her bottom lip, swollen from his kisses, and her whole body shook in need when he ran a finger under her bra cup. He pulled it down freeing that breast to his gaze and with a grin at her bent down and sucked the rosy tip of her nipple into his mouth.

"Stefano … please…" Her lust-filled moan shot straight to his cock, and he suckled harder, kneading the other nipple between his fingers. He knew how responsive she was to this kind of stimulation, and helplessly trapped as she was under his legs, he could feel the rising tension of her body, her desperate need to come. Breath coming in short gasps, her auburn hair feathered across the pillow, she held onto the headboard with a white knuckled grip, as her body clambered towards release. She screamed her annoyance when he released her nipple and bit down hard, causing her to pant harder. With an audible rip the delicate lace of her bra gave way under his ministrations and her bountiful curves spilled into his waiting hands. Stefano pushed them together and blew across her distended nipples. Mareijke squirmed underneath him. A fierce blush spread across her sweat-slicked skin, and her head rolled form side and side. He drank in the sight of his wife lost to her arousal, and a sense of calm settled over him, like it always did, when he gave her pleasure. Even without the discussion that they would have to have soon, he knew that all would be all right between them. Stefano lifted himself off her and pulled her pants off, taking her lacy thong with them. The musk of her arousal drew him, and he left the trousers dangling just under her knees. Pushing her knees up, he angled her lower body until she was half lying on her side. With her hands still clutching the headboard and her legs trapped inside her trousers she had nowhere to go, and he ran his hands down the curve of her hip and kneaded her ass cheeks. She pushed into his hand with a small moan, and he brought his hand down on one shapely ass cheek.

"Yesssss, again … Please, Stefano … I need." The rest of whatever she was going to say was lost in the sound of his hand connecting with her milky flesh, and his cock threatened to split its lacy covering, seeing the red marks of his possession. Hearing Mareijke's needy sighs in his ears he couldn't wait one minute longer. The sheets of the bed were stained with her arousal, and without further ado he freed his throbbing dick and aligned himself with her wet entrance.

"I'm going to fuck you now, cara. Is that what you want?" He growled his question into her shoulder and bit her ear, soothing the sting with his tongue.

The Knickers --- Doris O’Connor When the dry cleaner hands a pair of expensive panties to Mareijke she suspects that her husband is having an affair. The panties don’t belong to her and they are nothing like the ones she wears now. She rushes home to get her emotions under control and sees that her husband, who is supposed to be away, is home. Expecting to walk into her worst nightmare she instead walks into her bedroom and sees her husband alone but moaning her name. He has hidden a secret from her since before they were married, but now she has come face to face with it and he has no other option then to explain it to her. But her reaction isn’t what he expects and isn’t that great for both of them. Behind the Mask --- Raven McAllan Daisy decides to go on holiday alone. She needs to relax and she wants to spend time sketching the sunrise, and of course watching the hot men on the beach. But one night at dinner everything in her life changes. She agrees to share a table with Alex to avoid a long wait to eat alone, and the chemistry between the two is instant. When she returns home she is married. Her friends decide to take her out on the town as a belated bachelorette party. They insist on going to a strip club and what she sees there shocks her to the core. Her husband now has to explain why he is doing a lap dance and why he’s working at a strip club while she is out on the town with her friends. Will his explanation make her happy or angry or turned on.

I love the stories in this book. They were all great

I was gifted with this anthology in exchange for an honest review. I really, really enjoyed this anthology. It was perfect. I have a weakness for erotic romance between husband and wife. I think it&#039;s so nice when things get spiced up in older relationships. There are so many things I loved about this book: The secrets. They made me curious. I had to read on. And each of them was unique, hot and very personal. The sex. Hot, romantic and full of interesting twists and turns (no pun intended). The writing. These stories were well-written, they packed a punch, they kept me gripped. They were romantic and hot - a great combination. The flow - this book didn&#039;t rush and it didn&#039;t drag. It was a perfect read. I didn&#039;t read one of the stories. Not that it wasn&#039;t good, but I don&#039;t particularly enjoy menage so I left that one. Each to their own. From what I did read of it, it was well-written. I have one complaint. I would have loved more stories by the same authors on the same / similar topic to sink my teeth into. When is a second one coming out?

The Seventh by S.D. Wasley