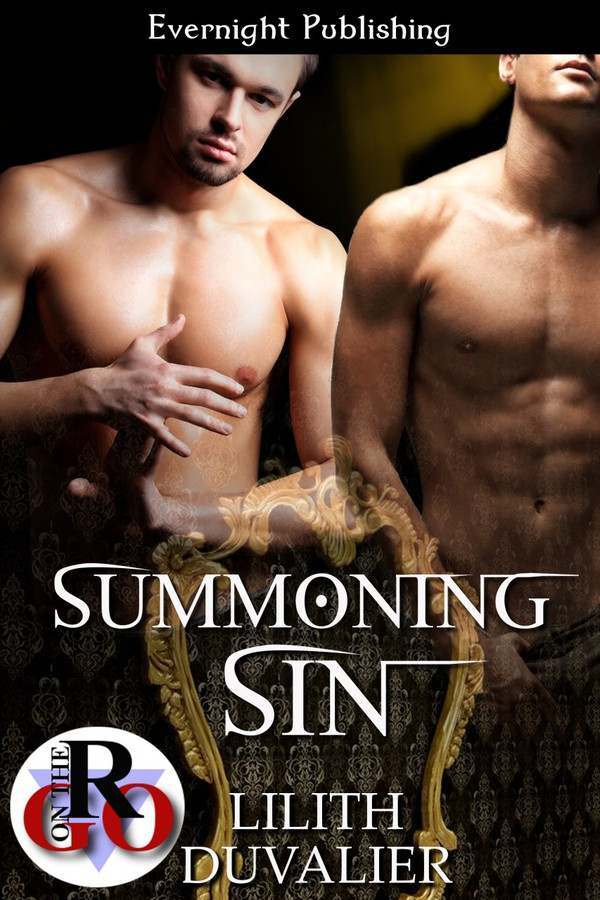 But when things go wrong, Elderoy finds himself not just in the incubus’s sexual thrall, but losing his life force as the demon draws it out of him orgasm by orgasm. With the demon keeping him from enacting the counter spell, and no one to save him, how will Elderoy escape the incubus’s clutches?

Had he truly succeeded in summoning this fantasy creature?

If he had, the demon should be contained within the sigil. According to the book, it should be standing within the lines of the circle. He just had to complete the binding so that he could cross in and out of the sigil without carrying the incubus with him.

So that he could… well to be crass, fornicate with the monster without it getting loose.

He took a step back toward the center of the room, heart pounding. The heat shot through his body again, so sudden it was almost painful. He cautiously made his way back to the sigils and the mirror, every muscle clenched tight.

This had seemed like a much better idea under the light of the coil. In the pitch black dark the potential danger of summoning a sexual Hell-fiend seemed much more real.

Nothing jumped out to attack him, carnally or otherwise, as he tip-toed back to what he was mostly sure was the center of his room. Not until he reached what he approximated as the location of the sigil did he realize there was still some light in the room.

It was coming from the Black Mirror.

The sketchy outline that it had reflected earlier was still there, even with no light to reflect. He stared at it in horrified fascination. He waved his hands in front of him, watching the way the white lines moved as he did. It was almost as though he could see his bones.

A soft noise, like a muffled click, insinuated itself into the room. It was a footfall, much like the sound of the teeny, dulled claws of his mother’s lap dog, Bumper. The hairs on the back of Elderoy’s neck stood up. The heat of the flames rushed through his body again as he whipped around. The click-click of clawed footsteps which definitely did not belong to Bumper continued. Elderoy started to shake as he realized they were circling him.  The noise stopped. So did Elderoy’s heart.

He could see it in the mirror.

Unlike the thin glowing outlines of Elderoy and everything else in the room, the creature behind him was fully filled in, glowing like the full moon that Elderoy had wanted.

It was male, or at least male-seeming and shatteringly beautiful. He was bare-chested, and Elderoy suspected that he was naked, but was too terrified to move and reveal enough of the demon’s reflection to determine his level of dress.

His muscles were perfect, round and firm like he had been carved from marble by a master sculptor. His jaw was square, his chin pointed in a way that was slightly feminine. His hair was a little too long, just a touch unruly, like it had been carefully arranged, but come loose due to some…strenuous activity.

Wholly black eyes stared out of his lovely face. They were sparkled with specks of white. Like stars in the night sky. There was something almost kind in the creature’s smile. Elderoy looked up at it, dry mouthed. It raised its eyebrows, as though it had asked him a question. Elderoy, unsure of what else to do, nodded acquiescence. The demon’s hands reached out and as they settled on his shoulders.

And that’s when Elderoy realized that, against every warning in the spell book, he had crossed inside the sigil without completing the spell.

This one was a little different, even if it was a bit predictable. I wasn’t sure how I was going to like it when most of the story is Elderoy conversing with himself about his spell to conjure the incubus demon. Not only does he not know what he’s doing, but he doesn’t follow the instructions correctly, causing all sorts of problems, or one problem in particular. Elderoy is apparently trying to get over a bad breakup and tries to conjure up the incubus for obvious reasons. However, things go a little overboard when he doesn’t seal the demon. Now the demon has power over him, causing him to have multiple, almost debilitating, orgasms. He can think of little else when this flares up and the demon teasing him doesn’t help. Luckily, all was not as it seemed with the ex, and he comes to the rescue in time to counter the spell, ceasing the demon from successfully sucking the life from Elderoy basically out of his cock. This was cute and even a bit funny. I admit, I kept waiting for the demon to solidify and rock Elderoy’s world in a mutually hot smexy way. Unfortunately, this never happened, but for a short story, this one moved along at a nice pace. A lot happens, yet things don’t ever really drag on for very long. I really only wished for more interaction, with someone other than Elderoy.

Imagine if you would a lonely male with a house all to himself. Then picture that this male was capable of doing magic. Now then, he isn’t so good at magic, and let the humor and fun begin. Elderoy thought the Incubus was a good idea at the time, kind of like a human’s blow up doll but only better, if only he’d remembered to close the circle. The down side is that while this is a really enjoyable little satire but it is a taste of what I would consider a story. The good news is that despite being overly short, it’s so amazingly well written that even though you notice the lack of book, there is no lack of story. Usually when you have a short like this, there is something missing, like details in a characters life or it’s too fast. That honestly was not an issue that I ever came across here. It’s perfectly paced and I loved all the detail and emotion packed in, sneakily hidden amongst the large dosage of humor. Some how and I still don’t know how, the author managed to fit it in and even more interestingly is that it worked. While the plot and characters are in a way relatable as who doesn’t have funny stories of males who refuse to ask for help or have gotten into a mishap of some kind while all alone. I’d say the way twist of magic keeps it from being anything this side of typical. I think this is a good taste of what the author has to show us and those that enjoy m/m are sure to have their interest piqued.