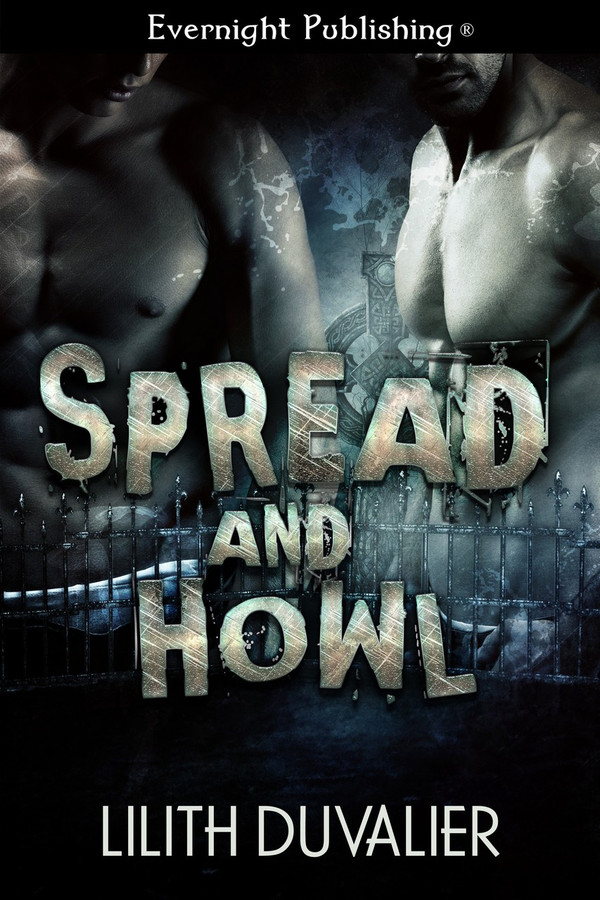 Gardenne-Sur-Seine is an unlucky village. A monster known only as The Beast stalks the village by night, leaving bodies and widows in its path. Marius Lemarque, the village stonemason, has lost his family and his lover to this terror, and is determined to learn what The Beast is before he kills it himself.

Guillaume Bissette, the King’s Master of Hunt, also wants to find and kill The Beast. The King would like the head for his trophy room, and fulfilling the King’s wish will strengthen Guillaume’s position at court.

But when Marius and Guillaume join forces to save Gardenne-Sur-Seine from The Beast, they quickly find themselves entangled in a hunt that neither could have imagined, embroiled in a secret neither can disclose, and engulfed by a passion neither expected.

Marius’s green eyes flicked down to Guillaume’s groin, lingering for only a moment before the stonemason nodded and pulled his smallclothes off, dropping them into the pile with the rest of his discarded clothes. His cock stood up straight, as alert as a guard dog at the palace gates. Guillaume looked away, turning his gaze to the fire as he took the last few steps necessary to cross the workshop.

He knelt in front of the fire, a few inches away from Marius, as though Guillaume truly intended to do no more than wash. Guillaume couldn’t stop himself from giving Marius a quick glance as he dropped to his knees. The man was a giant. An unbreachable wall of muscle, with a cock as large as the rest of him. Hands like dinner plates. A stone jaw and sharp green eyes. Arms like braided bread. Hay-blond hair falling to just below his jaw.

Guillaume was strong, lithe, fast, wealthy, and well connected, but less than a foot from the bulk of Marius, the warm smell of him, like salt and pine trees, none of that mattered. Guillaume reached for the washcloth floating in the basin with trembling hands. He saw movement out of the corner of his eye. Marius’s large, calloused hand closed over his wrist. Guillaume let Marius pull his hand away from the water and sucked in a breath as his palm met warm, velvety flesh.

In the woods with another knight, there was a bit of decorum about this. It was quiet, rushed, and egalitarian. You came in each other’s hands in the trees, and sauntered back to court from entirely different directions. In the brothel, there was a hierarchy and a price. He’d pay for the use of some skinny little thing’s mouth, shoot his load down their throat and be on his way with as little fuss as it took to buy apples from a cart in the street.

There was wildness in Gardenne-Sur-Seine.

Well hello there! Lilith Duvalier&#039;s &quot;Spread and Howl&quot; is a historical fantasy/horror/thriller with a French stroke. And erotic too! The town of Gardenne-Sur-Seine is being haunted by a monster called the Beast at night. the Beast is eating the townsfolk and leaving a lot of families in turmoil. The town&#039;s stonemason, Marius Lemarque, has lost his parents and his lover to the Beast (directly and indirectly). He&#039;s a man full of grief and wants revenge. He&#039;s a simple man who hides his sexuality and mourns for his love. When the King&#039;s Master of the Hunt (a fancy knight), the snobby, rich Lord Guillaume Bissette is ordered to the plagued town and bring back the Beast as a trophy for their ruler. Guillaume would rather fuck his knights or whore but does as he&#039;s ordered. Marius reluctantly joins forces with Guillaume, the two are in a fight for their life trying to defeat the Beast. &quot;Spread and Howl&quot; isn&#039;t a gushy romance. If you&#039;re looking for light kisses and cotton candy fluff, look else where because it&#039;s not here. This was dark, creepy, thrilling, fuck hot and hard. And it could have went even darker, in my opinion. I enjoyed the way both men were written. It was opposites attract - Marius is the humble laborer to Guillaume&#039;s snooty, entitled Lord. It was character who had a meaningful relationship vs. character who likes to bone and never had anything substantial. Both were alpha males without the overbearing Neanderthal ways. This wasn&#039;t a case of insta-love. It wasn&#039;t a &#039;we had sex so now you&#039;re the only penis for me&#039; story. (Yay!) It was more of a &#039;common goal that turned into a bond while trying to stay alive for another night&#039;. The action scenes were great. I could picture each scene as I read and enjoyed the flow. I thought the action and sex were a great balance. It was humping in each chapter. There was a plot afoot. I think Marius was the stronger of the two since we get a better glimpse of his life and environment. I like that he grieved and didn&#039;t automatically forget his lover once the new man came along. But...let me talk about the sex which I think was just as strong as the action. That first sex scene between Marius and Guillaume? Frantic, desperate, glad to be alive? That was fire. They both finished bruised, bitten, bloody and covered in semen! And the rough manhandling? I was so excited. And the second scene? That was erotica and horror intertwined quite smoothly. On one hand I&#039;m rooting for their lustful fucking and the other hand I&#039;m scared they wouldn&#039;t survive with danger so close by. It was thrilling and heart pumping. Oh and butt virgin, there is a butt virgin! I enjoyed his POV at those pivotal points. I liked the alternating POV approach, added depth to the story. I have few and very minor quibbles. I think maybe just the two: 1) Who summoned the Beast? Why did it pick the town? Are there more somewhere? Hmm...I&#039;ll never know. :( I thought there was going to be twist with the person behind it maybe showing themselves. I guess the sense of mystery lends credence to the suspenseful tone throughout the story, not everything needs a definitive answer and all that jazz. 2) The Postlude/Epilogue/Ending: I am happy with the solid HFN-ish/HEA. But I think the wrong person said &quot;my love&quot;. I don&#039;t think it was necessary, since neither MC&#039;s came across as those kind of men to me. But it was said, fine whatever. It left the smallest bit of sour to my kickass ending for me. I also liked what happened for the MC&#039;s but I&#039;d have liked to see the role progression. Even with those small quibbles, I loved &quot;Spread and Howl&quot;. Recommended if you&#039;re in the mood for erotica with a horror/thriller tinge and/or need a break from gushing sugar.

A beast roams Marius’ Town and the king’s man, Guillaume is there to catch it. I really liked this story. The plot was interesting and balanced. The action was intense. I liked both main characters. What lacked was actually the romance. It was too quick. They knew each other for a few hours before they have sex. The act itself was okay. It didn’t grip me but that could have been because of the inst-love. I enjoyed this author’s work so I say give it a try.

I really liked this story. The plot was interesting and balanced. The action was intense. I liked both main characters. What lacked was actually the romance. It was too quick. They knew each other for a few hours before they have sex. The act itself was okay. It didn’t grip me but that could have been because of the inst-love.