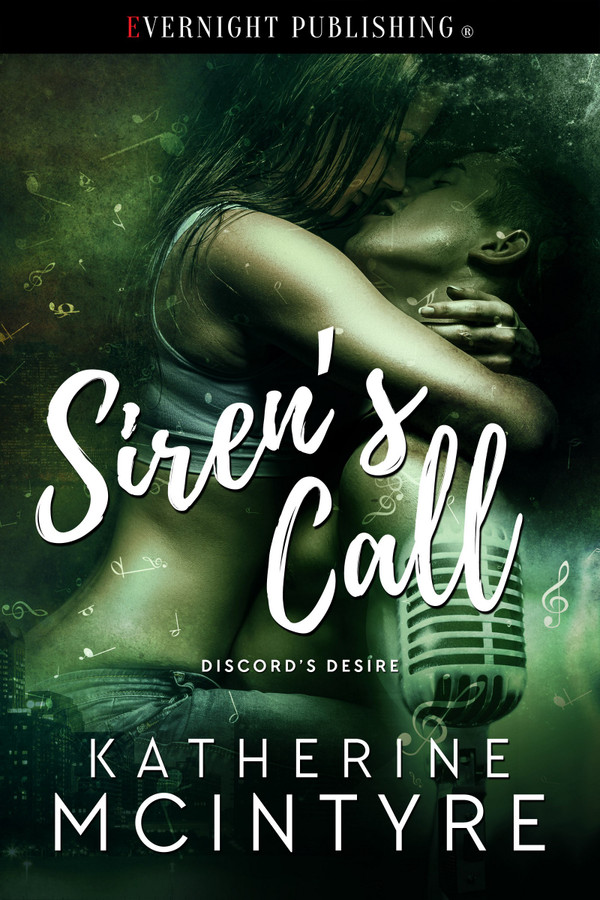 First, Liz loses her job. Then she spots a flyer for a punk show covered in fae glamour. The entire reason she moved to the humdrum ‘burbs was to avoid the supernatural crap she’s been seeing since she was a kid.

She should avoid the show, but curiosity wins out. A punk band consisting of an incubus, a satyr, a banshee, and a siren can only spell one thing—trouble.

When Liz lets it slip that she’s no average human, the siren takes a keen interest in her. Even without his otherworldly abilities, those skillful bass-playing fingers and the promise in his wicked smile might just be the thing to turn Liz’s rotten day around.

The leaves crunched under my feet as I stormed down the street. I clutched my messenger bag a little tighter and lined up by the telephone pole, my shoulders trembling like the brittle tree branches as the gusts of wind blew through.

Two years, but I never complained, even though the pay was crap and the customers were jerks. Fired and all because of Dave. Smug bastard screwed over anyone who wouldn’t screw him. The balding little creep had hounded me ever since Billy and I split up a couple of months ago. Good riddance to both of them.

I rubbed my bare arms as another gust blew through. The town lights were twinkling and stores began to flick their neons on. Where was this bus?

A paper fluttered on the telephone pole, one of those hastily scribbled adverts with a serial-killer scrawl.

A punk show in Jefferson City? Now that was a rarity. These people were either the worst marketers ever or looking to raise hell. I tugged the flyer loose and scanned it. Tonight only, the band Babykiller would be opening for the main act, Discord’s Desire. I lifted the paper, ready to crumple it up, but stopped.

The subtle glow that ringed the paper and the exotic perfume wafting off it sent my supernatural radar into overdrive. The flyer was saturated with a fae glamour meant to reel any average humans in the second they spotted it.

Unfortunately for them, I was the weird rarity.

Magic, glamour—none of that stuff affected me. I’d been seeing weird shit my entire life—fae, satyrs, centaurs, nymphs—everything that walked around disguised as humans. For some reason, their voodoo never worked on me.

Not the best ability when the rest of the world thought you were insane. After my first ten encounters with therapists trying to talk me through delusions and my “cries for attention,” I gave up and bounced from city to city until I moved all the way out here. Biggest perk of living in the middle of nowhere? Less chance of bumping into any of those supernatural weirdos, which meant I could live a semi-normal life.

I stared at the flyer, cursing its existence. Should I ignore this invitation and leave well enough alone? Of course, but now my curiosity was piqued and I had to find out why supernaturals wanted to muck around in Jefferson City.

The bus approached in the distance, the groan and squeak of the brakes echoing over to where I stood. As I stepped onto the bus, I yanked my cell phone from my pocket.

Glamour from all the supernatural beings has never worked on Liz. Immune, she’d learnt early on to keep her mouth shut about all the bizarre things wandering around. Frustrated and angry at having lost her job due to not allowing a man into her bed, Liz decides to blow off some steam at a random punk concert that was trying to use glamour to get human’s in attendance. Only Liz discovers the concert delivered far more than she’d bargained for. This is a fun and sexy short story. I found Liz’s voice to be modern and relatable and I enjoyed this quick snapshot into her world, being able to witness the paranormal activity and realities of the true world hidden to most people, but without any glamour or magic being able to affect her. I was pleased that Liz managed to get herself – and her friend – out of the concert. Even though the seductive spells didn’t work on her, I realise it could have been quite easy for Liz to go along with the flow, since everyone else was getting it on. I feel the intimacy of the Siren coming after Liz after the concert – and away from the spell and magic – really helped me appreciate their sex a lot more. I had to laugh at the ending though – I hadn’t expected it at all and thoroughly appreciated the slightly off-centre solution to Liz’s problems. With a fun, Happy For Now ending I feel this could be a great prequel or teaser before a full length novel – one I’d happily read. Fun and fast-paced with a good dash of magic and mayhem, this short story is sure to appeal to plenty of readers.