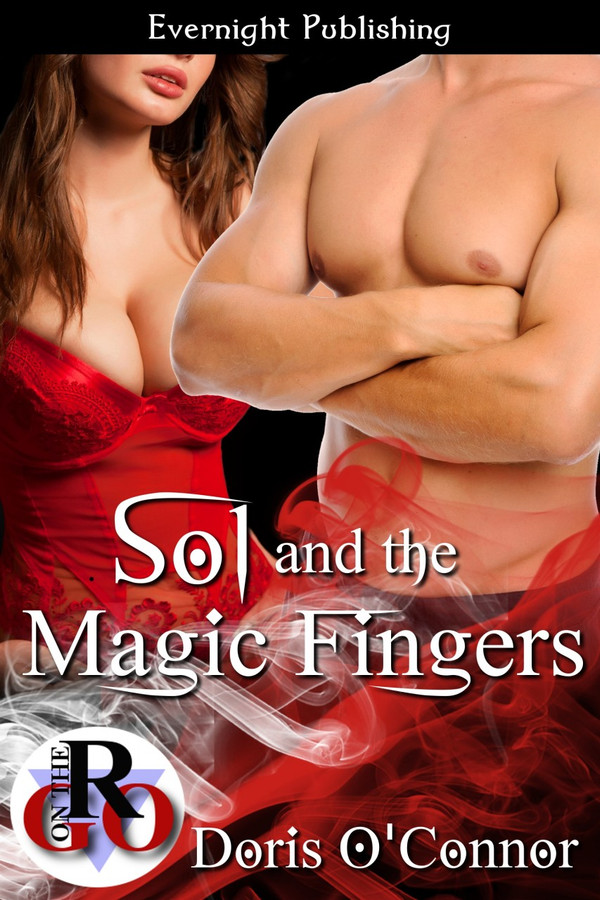 Breaking your e-reader at the end of a long and trying day is enough to send any woman over the edge. Karen's one treat are her naughty stories. Desperate times call for desperate measures.

Saucy stories in the old library? It doesn't seem likely, but when Karen is sent home with an odd looking reading device, magic happens at the touch of her fingers. Is the drop dead gorgeous man she encounters real or just a flight of her imagination?

Caught in a weekend of sexual delight, will she lose her heart, as well as her inhibitions? And is there any future for the two of them?

She jumped up, rinsed off her plate in the sink, and grabbing a fresh cup of coffee on the way, headed for the sanctuary of her bedroom. Here she liked to immerse herself in her stories, to forget about her worries, and let herself be transported into another world of drop dead gorgeous men, who actually knew how to pleasure a woman, and didn't leave their dirty socks on your bedroom floor. She giggled at the thought and ran her hands over the e-reader. Just like before it seemed to come to life in her hands. It shimmered and grew, and as if by magic the story she'd been reading appeared on the screen.  Well, Mr. Jones had said it was in there. She found her place and started reading.

Two hours later she dropped the reader out of her clammy hands and drew a ragged breath into her lungs. Wow, that had been an intense read. The story was hot, but somehow, this time round it had felt as though she had been the heroine in the book, so engrossed had she been in the scenes unfolding in her mind. Beads of perspiration covered her body, and her breasts felt heavy and so sensitive that the slightest touch of her blouse against her hard nipples sent darts of stinging awareness between her thighs. Her underwear was soaked through with the evidence of her arousal, and a mere brush of her fingers over the engorged nub at the top of her slit was all it took for her to tumble into a breathtaking orgasm.

When she had her breathing back under control, she smiled, as her fingertips touched the reader. It brightened and vibrated slightly, and Karen couldn't stop herself from murmuring her wish.

"If only you could magic me a real life man like the ones in your stories." The reader grew hot, and Karen yelped as it burned her fingertips. She blew on them and frowned, but the reader was once again back to normal. Still that odd looking design, but not glowing, vibrating, or otherwise, and—she touched it gingerly—not hot. Karen shook her head at her fanciful imaginings and headed for the shower.

She switched on the shower and stepped under the heavy stream. The power shower had been the major selling point when Karen had bought her apartment. Where other women soaked in the bath, she lingered in the shower. Nothing like letting the jets of hot water soothe cramping muscles and drain the stresses of the day down the swirling plughole. She closed her eyes and let her mind wander. She wasn't really standing in the shower—no she was on a tropical island under a cascading waterfall, waiting for her lover to appear. She smiled and cupped her breasts, imagining it was another set of hands massaging the heavy globes. She leaned back against the tiles to steady herself, only in her imagination it was her lover's hard muscled chest. Two strong arms circled her, and her heart did a silly little flop, as teeth grazed her ear.

"I've got you. Just let yourself feel." The deeply seductive, slightly accented voice dripped over her senses, like hot, molten chocolate, and the unmistakable edge of command caused a delicious flutter of excitement deep inside her core. He trailed his large, slightly calloused hands along her arms and pulled them up high above her head. Something wrapped around her wrists and another tug brought her up on her tiptoes. She swayed until his hard arm ‘round her waist grounded her against him. A hair-roughened thigh slipped between her legs, creating delicious friction against her core, and a rush of her juices coated her nether lips.

"Who are you?" She had to ask, even if it meant spoiling the magic, for the hard cock pressing into her ass cheeks left her in no doubt that she was not on her own. Either she was fast asleep, having the most erotic dream yet, or she had indeed been joined in the shower by an unknown man, whose clean and slightly spicy musk permeated her consciousness, and pitched her arousal higher still. Like the strongest aphrodisiac, his scent surrounded her, strange and familiar all at once, and the frisson of fear the absurdity of the situation brought with it, just increased the intensity of her feelings.

"I'm Sol, and I'm here to make your dreams come true. Will you let me?"

Magical! And Hot! And Sweet! Sol and the Magic Fingers had me enraptured from page one. Like with many good short stories, it would have been fabulous to know more. It would have been great to delve more into the characters and especially into the history of the genie, but Sol and the Magic Fingers is also perfect the way it is. In little less than 30 pages, the author provides a quick short romance and erotic fix that didn’t leave me hanging in any way. The story flows easily, from a captivating beginning to a romantic and sizzling middle to a magical end. There were moments where I was squirming in my seat and moments were my heart was breaking for the characters. Characters that were well built for such a short space. Karen is easily identifiable with through her insecurities and loneliness whilst Sol is plain dreamy. Well written, the sizzling sexual scenes play a major role in this erotic romance and they alter from scorching (loved the shower scene) to sweet. Overall, Ms. Doris O’ Connor’s short story is an enjoyable read for any given moment of the day. I was only left with one question: where can I find one of those e-readers?