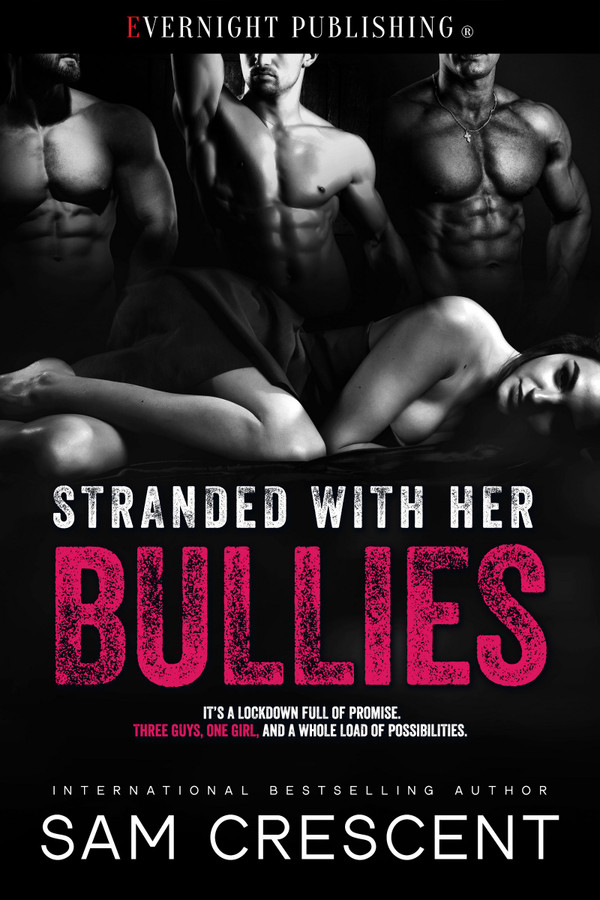 When a lockdown is declared, Daphne is forced to close her successful bed-and-breakfast for the foreseeable future, which she expects to spend alone. However, three men from her past didn’t leave with all the others. After twelve years, her high school bullies are back. She doesn’t know what game they’re playing, but she won’t be part of it.

Eric, Micah, and Dean intend to win her heart. What started as a challenge soon turns into more as the three friends band together to claim the woman of their dreams. There was only supposed to be one victor, but now they will all win.

Daphne doesn’t plan to fall for them, but when an opportunity opens up, they’re just too damn hot to turn down.

It’s a lockdown full of promise. Three guys, one girl, and many possibilities. Why not enjoy the moment, even if she doesn’t intend for it to last forever. Or will it?

Daphne tried to cover her body from him, but he didn’t look away, catching sight of her pussy, cleanly shaven, and her full, ripe tits. Coated in water, all he wanted to do was lick them off.

Dean had looked happy with himself. Micah was pissed. Now it was his turn.

“God, don’t you know anything about personal space?” she asked, trying to cover herself.

“Yes, touching that pretty cunt, and I have to say, the orgasm was hot, but not nearly as good as I can do it.” He wanted to be her hands.

It had taken every single ounce of control he possessed to keep his distance. It was so fucking hard, especially at her cries. She’d tried to contain them. When a woman came, it needed to be loud. Only then had she lost complete control, and when that happened, it was such a beautiful sight. One he’d love to show her.

She opened her mouth, closed it, opened it again. “I can’t believe you just said that. You need to leave.”

“No can do. Didn’t the cops already tell you that?”

She got the towel wrapped around her body and moved toward him, glaring. “I don’t know what kind of game you’re playing, and I don’t like it. The best thing you and your friends can do is wait this out until you can leave.”

She tried to brush past him, but he wasn’t letting her leave so quickly. Holding her arm, he pulled her close, pressing her against the door.

He cupped her cheek, tilting her head back so he could look into her pretty brown eyes. “Did you know you cried out Dean’s name?” he asked.

It was subtle, hot as fuck, but it was there.

Eric didn’t think it was possible, but her cheeks went an even deeper shade of red.

“I don’t know what you’re talking about.”

Her hands were on his shoulders, but she’d yet to push him away. Her lips were telling him to do one thing, as her body begged for another. Eric leaned forward, sliding his tongue across her pulse. Her hands fluttered as if she couldn’t quite contain her reaction.

He placed his palm flat on her stomach.

“You thought about him while you rubbed your pussy. I think Dean will be disappointed to know you failed to give yourself a proper orgasm,” he said.

“What do you want?” She cried out as he cupped her pussy. He moved the bath towel out of the way and felt her naked folds. No hair, smooth. He groaned, liking what he felt. Her lips were wet, but not as soaked as they needed to be.

“Push me away. Tell me to stop,” he said, pressing a finger to her swollen clit.

Sliding his tongue across her pulse, he nipped at her flesh, hearing her moan. It was deep. Her hands lowered from his chest and he waited a few seconds to see if she’d try to push him away again.

With an easy flick of the wrist, he had the towel in a heap on the floor, where it was meant to be.

I&#039;m only giving this a good review out of undying loyalty for sam crescent; While this story is well written and steamy, i think i just don&#039;t respect sam crescent&#039;s heroines and it&#039;s ruining the experience for me. they are weak and easily convinced by the most horrid of men to forgive; i mean these dudes barely apologize for their actions and the heroine is like &quot; okay! *open legs&quot; ugh. for once i want a woman with a backbone who isnt easily convinced to drop into bed with her abuser(s).

THE REVIEW FOR THE BOOK: Stranded with Her Bullies GENRE: Reverse Harem AUTHOR: Sam Crescent TROPE: contemporary romance, reverse harem, bully romance, erotic TYPE: Standalone POV: Multiple POV MY RATING: 5.0 Stars Daphne is running a successful Bed &amp; Breakfast in her home time when a lockdown is about to go into effect due to the pandemic. When Daphne goes to check the rooms, she notices that three men did not leave like the rest of the guest. The three bullies from her high school days’ refuse to check out of the B&amp;B. 12 years later, they’re still causing her trouble. Little does she know, that her three bullies have set out a game to see which one of them can win her heart forever. Bully Romance. Check. Steamy Reverse Harem. Check. Check. The only thing wrong with this book is that it wasn’t longer. I absolutely loved this book. I was shocked to see how steamy the book got so quickly. Given the size of the novel, it shouldn’t have come as a surprise but I guess I’m used to slow burns. This book packed so much into such a short read. I loved watching Daphne resist her bullies and in turn watch them earn her forgiveness. Dean, Eric and Micah all had their own issues and reasons for bullying Daphne back in high school. I like that she put up a fight and refused to cower to them. Daphne wasn’t going to let them back into her life so easily after all they did to her. Definitely check out this book. It’s one steamy book.

I loved how the guys had to work for their woman. There is a lot of history between Daphne, Dean, Eric &amp; Micah &amp; none of its good. Dean sets the wheels in motion &amp; he doesn&#039;t fail. Eric is haunted by what he did in the past but is willing to put his heart on the line for the woman he loves. Micah is scared that he will be invisible but they all show him how wrong he his.

I love Sam Crescent’s books but I must say I am really over “bully” books. WOW! This one was NOT like any “bully” story I’ve read. I liked her adding the pandemic into it, definitely a different kind of book with great characters. Absolutely 1 Click this! Loved It!!

All I can say is I loved this book. Menage and MC are by favorite genres and this menage was a little different. This book is on MY top 10 for the year. Kudos Sam!!

Very enjoyable storyline and characters. Made the lockdown look exciting!!

I&#039;d kind of gotten bored with the &quot;bully&quot; romances but since I love Sam Crescent&#039;s books, I decided to read this one! Loved it. Eric, Micah and Dean were bullies to Daphne when they were all in high school. They all moved on afterwards but the guys have kept their eyes on her. They&#039;re all successful now and want to make it up to her so when a lockdown happens while they are at the Bed and Breakfast she owns, they get that chance. Starts out as them seeing which one she will pick but it turns into much more than any of them dreamed of. Daphne was a strong character and didn&#039;t give in right away but you know the guys are gonna wear her down. Who will she choose? And what will happen to the guys she doesn&#039;t choose? No spoilers from me so you&#039;ll have to get the book to find out what happens. Love, love, love the epilogue also!!!

I don&#039;t think Sam has written a bad book. Everything I read of hers is great! And this is another one I highly recommend....ohhh the smuttness in the book it hot..

I loved how the guys had to work for their woman. There is a lot of history between Daphne, Dean, Eric &amp; Micah &amp; none of its good. Dean sets the wheels in motion &amp; he doesn&#039;t fail. Eric is haunted by what he did in the past but is willing to put his heart on the line for the woman he loves. Micah is scared that he will be invisible but they all show him how wrong he his.

No matter how many books by Sam read I am continually impressed by the characters she brings to life and the stories she tells with such creativity. Daphne is up against 3 men that have a past to make up for and are willing to do what it takes to win her heart..... together. If you’re looking for a sweet love story with some seriously HOT sexy time then you’re in the right place! Awesome read!

Oh my goodness! What a fantastic use of the pandemic and lockdown to put a positive spin on our time in isolation. These characters are phenomenal and so realistic! I love how all of the characters have grown from the brief glimpses we get into their pasts, and how one woman draws them even closer together. The author really outdid herself with the story and the steaminess. I enjoyed this book and was enthralled from the very beginning. I can’t wait to see what her next book will be!

Can three bullies from high school find love with the woman they tormented? Only a pandemic will tell the truth. Daphne found herself quarantined with her 3 nemesis, but what she didn&#039;t count on was being attracted to them. Michael, Dean, and Eric are happy to be stuck inside with the woman they&#039;ve all lusted after for years. The story was good. I couldn&#039;t see the attraction at first, but as the story unfolded, the connection became more and more transparent.