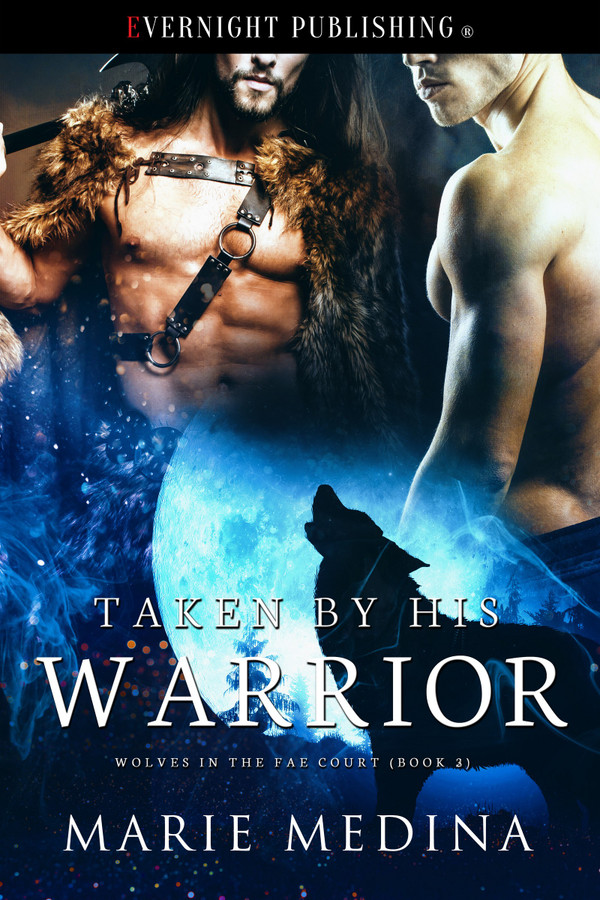 Wolves in the Fae Court, 3

Asmund knows he’s put off marriage too long. With his two closest friends happily mated to members of the wolf pack, he allows himself to be talked into hosting a ball to find himself a wife. He’s spent too many years waiting for the perfect person to simply fall into his lap.

But just days before the ball, a wolf shifter with a hint of ancient fae blood messes up all his plans. Vadik says the king is his mate, and Asmund knows that shifters are never wrong. But Asmund needs heirs, which the Beta wolf can’t give him, so he knows he must stay strong and convince Vadik to walk away, despite their attraction. The hardest part proves to be convincing himself that this man, who seems to fulfill every fantasy he’s ever had, isn’t right for him.

Footsteps sounded outside, and Vadik went to the door and flung it open. He saw Asmund about to shut his door, and the king paused in this action when he saw Vadik.

Asmund acknowledged him with a nod. “Is everything all right with your room?”

Asmund stepped back out into the hallway. “I’m sure Erik enjoyed telling you who that room is normally reserved for.”

“He did get a kick out of it.” Vadik nodded to the room. “Does someone actually keep it clean, or is it done by magic?”

“It’s cleaned regularly, but when I opened the door earlier, I set a little spell to work to clear the dust and air the room out.”

“Did you really think no one would tell me?”

“I wasn’t thinking at all. It was just a matter of convenience.” Asmund’s hands went to his hips, a gesture Vadik once again found somehow thrilling. “Look, we’ve already established what you do to my ability to think clearly. And I—”

“Have we?” Vadik said, cutting the king off as he strode across the hall. “I’d love to hear more about that.”

Asmund held both hands up. “You have to stop. I can’t be seen openly keeping a lover so close to the Briod Ball. It’s disrespectful. Ungentlemanly.”

“Ungentlemanly? Seems a gentleman would cancel such an event after finding his fated mate. Don’t honor and duty apply to fate as well? I believe Luke said that you told him fate had brought our people together.”

“That is not what I said. I said I thought he and Gregor had come to the fae court for a reason.”

“At least you admit to saying it.”

“Of course I do. Lying is dishonorable.”

“Then tell me how you really feel about me.”

The king stared at him a long moment. “I already told you I find you desirable. And I admire many things about you. I’ve told you my reasons for resisting you. My own feelings and desires come second and always will. I don’t know of any other way to say it.”

“Call off the ball for now. Allow me to court you. If you can’t love me, I’ll accept that, and then you can do whatever you want, but I won’t keep listening to these excuses.”

“Excuses? The duty that has been a part of every moment of my life? My responsibility to my people?”

“There’s a line of succession for a reason. Things happen. People die. Or they’re unfit or unwilling to rule.” He paused briefly before saying, “And people fall in love. Even kings.”

The king’s gaze wavered a moment, but then he shook his head. “It’s best for a child to succeed a parent. Things go better. Run more smoothly. There’s less fighting and squabbling and division. The people feel more secure with an established heir. It’s so much easier.”

Vadik frowned. “You’d send me away just to make things easier in a future we know nothing about?”

Asmund’s eyes flashed at him before narrowing. “That is not what I said!”

Pain blossomed in Vadik’s chest as he stood to his full height. “But it’s what you meant.” He turned on his heels and strode back to his room, worried he would say something cruel in his agitated state. His need to claim his mate warred with his plans to be patient.

Before he reached the door, something brought him to a halt. Again, he felt resistance in the air. Asmund came around to face him and glared up at him, poking a finger in his chest the way he had earlier that day.

Vadik took the king’s upraised hand and drew it to his heart, knowing the other man would feel how hard it was pounding. He wanted the king to feel it, to know how he affected Vadik. “Yet you get to toy with me? Saying that you want me but that we can’t be together practically in the same sentence?”

Asmund opened his mouth, but he said nothing, looking down.

I knew, I knew, I knew this was going to be an explosive book and I was right. The chemistry between Vadik and Asmund was indescribable. And especially with Asmund being a king, I knew he was going to fight with all his might, the connection they felt. And Vadik was going to give him a run for his money. And boy did he. The moment Vadik got a whiff of Asmund’s scent he knew. And when he touched hands with him, he was 100% positive this king was his mate and he was going to do all he could to make Asmund see. But Asmund is caught up in his duty and doing all he can to deny the pull he feels. And even when giving in to the pull, he conflicts himself and Vadik. By throwing the ball and more. But even worse, Asmund can’t get past that he’s supposed to have an heir and he knows he has to deny his heart and his mate to have what his duty says he needs. But Vadik is persistent and even the people at the ball are starting to wonder why they are there when it’s clear who belongs to who. But will Asmund finally listen to Vadik and follow his heart or do what his duty says he’s supposed to do? I feel for Asmund. It’s like with any royalty, they have a duty to uphold and when it’s not done, then it seems like everyone wants to poke a hole somewhere, thinking it’s a weakness. But what they don’t get, is marrying for duty and not love can often lead to disaster. As seen by everyday real life royals. It’s a disaster a lot. But what I love, is no matter what, Vadik knows his heart and knows what’s right. And he’s determined to make sure Asmund gets it. He is patient, even when he doesn’t want to be. He remains a gentleman, even when his wolf demands he punch a few. He proves himself worthy and worthy, time and time again. And that actually made me a bit sad for a bit. That Asmund wasn’t really taking everything into consideration. But it’s hard and I get it. But these two, no matter, if they could have children or not, are just perfect for each other and it may take a few kicks in the pants, or trickery from some others, but Asmund is finally starting to get a clue. These guys are just special and I love them. Doesn’t hurt that Vadik seems to push every button on everyone’s lists. He’s a hottie. But he’s got the heart of gold underneath that makes it even better.

When Vadik realizes that king Asmund is his mate, he is consistently denied by the king,due to the king needing an heir. This is a slow burn relationship but I did enjoy how the two main characters related to each other. It was especially cute the way Asmund rode on Vadik&#039;s back while Vadik was in wolf form. The writing was well done and the story was smoothly paced with a very beautiful and sweet ending. Very enjoyable. =)