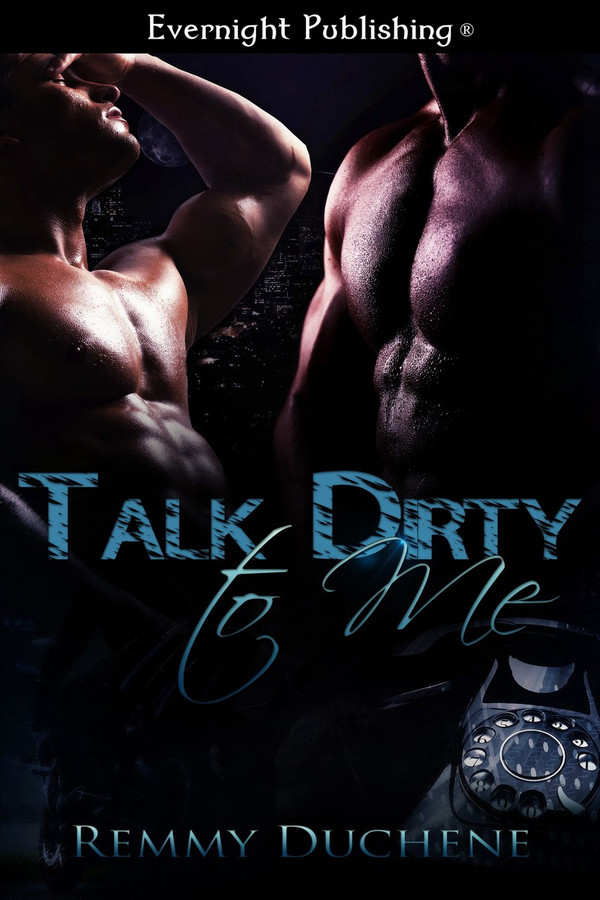 Majid Thalen is a successful doctor with a past who's been working crazy hours. Finally, exhausted, he takes some time off work and decides to get some rest. But he's about to learn that surgery isn't the only thing one must not do when tired.

Zavon Mowat is a sex line operator because the bills and his tuition are not going to pay themselves. When Majid accidentally calls his line, he is instantly drawn in by this man. But there's something in Majid's past that is getting in the way of everything.

Driving home wasn’t easy, but he managed it. He parked the car outside the garage and headed inside. He made his way up the stairs, knowing in the back of his exhausted mind that he had to call Henry. It was probably not something earth-shattering, but he knew how Henry hated not getting at least a call back to say I’ll call you later.

In his bedroom he stripped down to nothing and slid beneath the cool sheets. As a doctor, he learned a long time ago that sleeping was more important than bathing. The brain needed time to rest. Besides, he was sleeping alone, so there was no one there to get offended if he gave off a little musk.

He hadn’t had a good night’s sleep in almost three weeks because, even though boss told him to take time off, he just couldn’t. One doctor quit, another retired, and two were too young to take anything seriously. Majid didn’t trust them yet because they hadn’t given him a reason to.

His eyes burned fiercely. Still, he reached for the phone and checked his voice mail.

“Son, it’s your father. Listen, your mother and I are in Austria. We haven’t really settled into the hotel yet, but we wanted to try you again. I guess you’re still at the hospital—we love you and we miss both you and Henry. I’m going to call him after this call.”

Majid paused the voice mail and took a breath. He smiled. He’d been worried about his parents. They’d taken a European vacation—something they always wanted to do, but with his father’s career as a cop and his mother’s teaching and raising the boys, they never did get around to it.

The next message was from some telemarketer trying to get him to sign up for another credit card, and the one after that was his best friend and adopted brother, Henry.

“Dude, you really need to lay off the multiple shifts at that hospital. Call me, okay? Mom and Dad are looking for you.”

Rolling his eyes, he dialed Henry’s number and waited for him to pick up. While it rang, Majid fought the heaviness of his eyelids by thinking of everything.

“Well, that’s not conducive to what we’re about to do.”

“Henry, stop playing. You wanted me to call you and I’m exhausted.”

The voice on the other laughed huskily. “I am not Henry.”

Majid rolled his eyes. “Very funny. Look, I could have called Mom and Dad, you know. So what’s up?”

“Trust me, you did not call Henry.”

“You called my very own private line of pleasure.”

One evening Majid mistakenly calls the wrong man (he intended to call his friend), and ends up chatting with Zavon. While Majid realizes his mistake early on Zavon does an excellent job of keeping Majid engaged enough for both men to start an awkward conversation that leaves then both wanting more. Talk Dirty to Me started as a flawed but entertaining erotic romance. It has all of the ingredients right in the story: charismatic protagonists, interesting plot, fun supporting characters and the sex scenes were also well done. My main criticism of the story is the choice to add in quirky behavioral traits to both Zavon and Majid in the back half of the story. They are both inconsistently drawn, but one worked better for me than the other. For example, Majid’s insecurities seemed to completely overtake him towards the end. His initial reservation to meeting with Zavon is totally understandable, but I just felt it was a little odd that he became more noticeably insecure as he opened up to Zavon. It would have been a less jarring experience to have those behaviors well established at the beginning and then have them flow through the story. It felt as if it was suddenly tacked on to create extra drama. Zavon was presented as a relaxed, sex positive man who was driven to make himself into a better person; at least on the phone he came off that way. In his everyday life he is a little more conservative. His personality switch was more believable given his line of work. Another minor issue that I had is that the reader is not provided with a thorough description of any of the characters. Vague details are scattered throughout the story, but they were not good enough to give me a better sense of both men. Instead I just used the hot guys on the cover of the e-book to fill in those details. If the book had those details it would have helped me connect better with the story. Even with the flaws, I do recommend Talk Dirty to Me. It was a satisfying short story that many would enjoy.

This was one short and sweet and sexy book. I would go as far as saying there was also a dose of cuteness, too, despite the fact that some heavy issues are dealt with. In short, it’s a jam-packed story which covers everything nicely without taking away from the other elements. The story is about Majid Thalen. He is a lonely doctor and has gone through some very difficult times as a child which meant that he was abandoned by his biological family. However, happily, his best friend’s family stepped up and he became the man he is when he accidentally calls the sex line operated by Zavon Mowat. Zavon is a wonderful and understanding character, the perfect match for Majid. Although Zavon is shy, it isn’t a far cry from his sex line persona, which isn’t at all over the top. Majid has no time for sex or relationships and despite the length his issues are dealt with nicely. This is definitely something that I would go back to reread at another time!