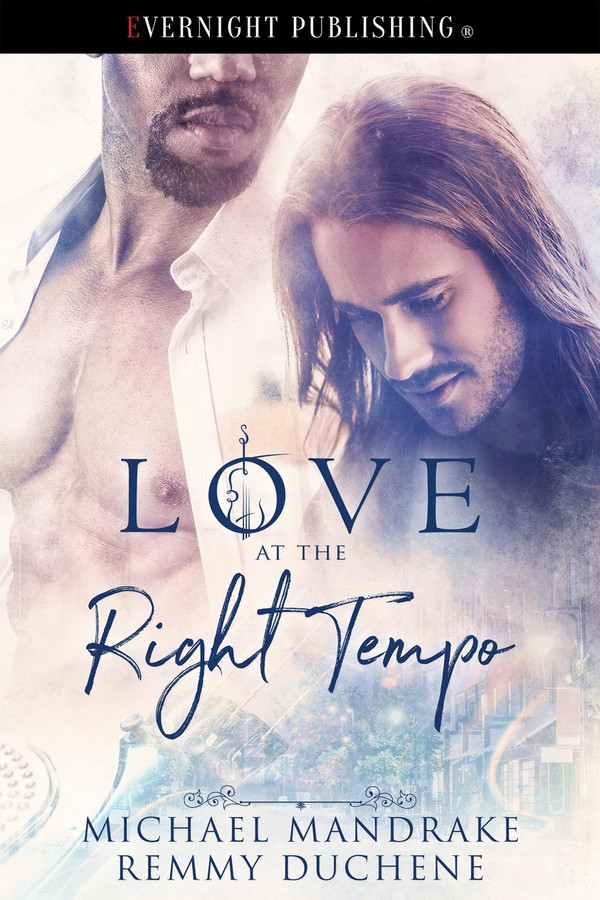 Violinist Frederick Tremblay is one of the biggest names in classical music. When it comes to work, he’s all in with no time for love. Hell, he barely makes time to eat. When he agrees to play at an acquaintance's son's birthday party he figures he’ll go in, make his rounds, then go home—but his plans change when he walks into the path of Vaughan Singleton.

Vaughan "Sin" Singleton is the disowned heir to a candy empire. Joining the military was the thing to save him and also the one thing that brought him to his knees. Forced to retire, slinging alcohol wasn’t his dream but he needs something to pay the bills and to assist with easing back into civilian life. Vaughan isn’t looking for love, but one unguarded moment with Frederick changes everything.

Frederick ignored her comment and put up his free hand. There was a man behind the bar, but he had his back turned and right now, no one else was there working with him. He looked to be busy drying glasses or perhaps washing. Though Frederick didn’t want to disturb him, he really wanted something else to quench his thirst.

The man turned around and approached them. “What can I get you?”

Frederick eyed the mature gentleman in front of him, taking in his features. Dark brown eyes, hair cut low with a beard and well trimmed mustache. His lips were thick. Kissable. Frederick loved a man with distinct features.

“Oh … um… I’d like a soda. Perhaps a 7-Up or Sprite if you have it.” Frederick continued staring, clutching his violin case tightly in his hands.

Deena seemed to pick up that he was tongue tied. “And I’ll have a beer. Heineken if you have it?”

“Heineken for the lady and a—um—soda for the gentleman,” the bartender said. There was a slightly hitch in the way he said soda, almost as if in disbelief. He then focused his attention on Deena. “Would you like the bottle or a glass?”

“The bottle is fine. I’m a simple kind of gal.” She giggled.

Frederick smiled at the man, still holding onto his violin as if it were a life raft. He wondered why the bartender seemed put off by his request. “Something funny about 7-Up or Sprite?”

The bartender eyed him with his head tilted slightly to the side. “Oh nothing.” He spoke, his lips forming over the two words making them escape his being easily. “Nothing at all.” Without another word, he walked over for a clean glass that sparkled. They had the word Prince’s with a crown on the side in golden letters. Using large hands, the bar man operated the tap to expertly fill the glass with Sprite before grabbing a green bottle of Heineken from a cooler and prying off the cap. When he returned he set the glass before Frederick without a word but offered Deena a smile with her drink. “Ma’am?”

“Thanks.” Deena batted her eyelashes at him.

Frederick suppressed a growl and eyed his glass, watching the bartender walk away again. For some reason, it bothered him that the guy appeared to be bothered by his choice of beverage. “I don’t drink alcohol, by the way. I’m sort of boring. The fact I play violin is the most interesting thing about me.” Frederick set Gabriel beside him in a vacant chair. He lifted the glass to his lips and swallowed slowly, still gazing at the handsome gentleman working the bar.

Deena nearly spat out her beer, and she nudged him with her elbow.

“To each their own,” the bartender said. “Did anyone let Stuart know you’re here?”

Frederick finished his Sprite, still gawking at the man. “Yes, the hostess did. I suppose she’ll be back shortly. Do you mind if I ask your name?” Frederick thought he’d go for broke even though it was quite possible he’d be barking up the wrong tree. A part of him said he wasn’t, or perhaps he hoped that to be true.

Deena gasped next to him, seemingly in surprise.

The bartender moved to stand directly across from Frederick, braced his elbows into the bar and leaned in. “If you wish to tell my boss I’ve been an ass to you,” he said, his voice warm and rough. “You don’t need my name for that. All you have to do is tell him the black guy at the bar. I’m the only one here.”

Frederick shivered at the sound of the man’s voice and how he leaned in so close to him. Instead of shying away as he usually did, he decided to play the game. “Actually, I wasn’t thinking that at all. More like, I wanted to know your name so I know the lovely man that is taking such good care of us tonight and, maybe might like to have a drink with me after my performance?” Frederick knew he was going for broke. Gazing at the bartender, Frederick had every intention on finding out something about him, even if it was the disappointing news he’d dread.

“I see.” The barman licked his lips. “I’m working. Drinking on the job is strictly prohibited, and besides—you’re not a fan of alcohol.”

Frederick sighed inwardly. He looked to Deena for help, but she only kept drinking her beverage.

The story is about violinist Frederick Tremblay and ex-marine, now bartender Vaughan Singleton. I like them as a couple, they are cute and sweet. But for me there was way too many ‘wow is me’ moments in this book. Them together got too much, but apart they were worse. Worried that the other wouldn’t still want them because they fell in love so fast, worried that they would be separated too much and worried that they wouldn’t work out. It was just a little bit never ending. There was also a lot of sex that I felt didn’t do anything for the story. There was a lot of unanswered, unsolved things for me. Things were brought up and then not resolved. And while I don’t think everything can be resolved in one book, in this case it felt like they were introduced and then forgotten. There are things I liked about Love at the Right Tempo. I could feel the strain between Fredrick and his parents, it came out so well in the story. I also like that an eating issue had some light put on it, even if I don’t feel it was well resolved or spoken about. I really liked that Vaughan spent time with the son of one of his fallen brothers. It was a very nice touch to the story. Vaughan and his brother reconnecting was great. But yet again, it didn’t really go anywhere. Love at the Right Tempo is a cute story. It is full of sex and the plot is interesting. The two female best friends are a good addition and different from each other. The star for me is Nefertiti, the puppy. The Queen as they call her is adorable. Overall this is a light, fairly fluffy read that was enjoyable.

This is the story of an unlikely romance that breaks all the rules and surpasses all expectations. Two incredible men, who had both pretty much given up on love, come together to create something truly beautiful. Their journey to love is not necessarily an easy one, but every bump in the road just served to make them stronger. Theirs is a relationship borne of hope and resilience. I found this book to be honest, impassioned, seductive, uplifting, and utterly enchanting. I would recommend it to anyone looking for a sweet and sexy read.