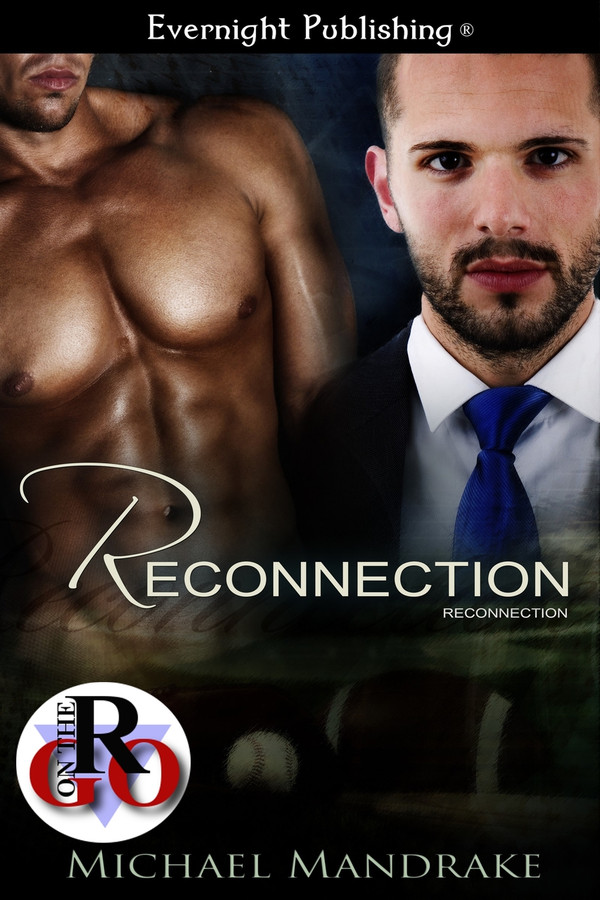 Every once in a while, the average looking guy scores!

Robert McIntyre is a closeted, average looking sports columnist for the Daily Read. Unfortunately, his desire to stay in has cost him the chance at love more than once. However, now it seems his luck will change since his editor has asked him to interview Jake Valenta. Jake and Robert knew one another in college and when he heard from a mutual friend that Jake might be bisexual, Robert didn’t believe him.

Before Robert’s trip, they discover a mutual affection for one another. Jake shares his desire to stay behind closed doors because he can’t stand being called a fag, but desperately wants Robert to be his man.

Robert and Jake want a chance to reconnect on a more personal level, but will this budding relationship ruin their careers?

I grinned and cocked an eyebrow. “Hey, um, yeah I thought we weren’t gonna talk until I made it down there?”

“You really didn’t think I’d wait until then, did you? I’ve waited for a long time to talk with you, Robert. Like Lori and Alex said, no time like the present to get to know one another  again. Besides, when coach told me Robert McIntyre would be coming down to get an exclusive on me, I thought it would be the best time for us to catch up.”

“Robert, we didn’t spend a whole lotta time together at Oklahoma State. You were a junior when I first came in. I didn’t think you’d want anything to do with me.”

“I did, but….” I got up from my desk and walked by the window so none of my co-workers would listen to what I was saying. “You and Chastity were a hot item. When the two of you got together, we rarely saw one another except at parties. Then I graduated—”

“Yeah two years too soon, Rob. I swear, I wish I had more courage to come out, but I don’t have the temperament to deal with people calling me faggot. I’m a hothead, so I’d be ready to whoop ass the second someone says the word.”

“Yeah, I um—wait, Jake, did you say—” I nearly lost my balance when I heard Jake Valenta say he was gay.

Jake laughed out loud. “C’mon, Robert, don’t play dumb with me. You were well aware Chastity and I faked our relationship. Lori told Alex, and I know she didn’t keep that information to herself.”

“No, she told me, but I didn’t believe it because—”

Jake interrupted me. “I know, ‘cause I play straight real well.”

“And I always will, Robert, ‘cause I can’t deal with stupid people saying those words. Here’s a scoop for you, Robert. I’m gay and always have been. Of course, if you print it, I will deny it. Baseball is still in the dark ages when it comes to these types of things, and until someone else carries the torch for us, I’ll be proudly staying behind the rainbow colored door. However, if people would stop acting like assholes and accept us for what we are, it might be sooner.”

Listening to Jake talk about his sexual orientation took me back in time. If only I had pursued him, if only I’d been less shy, if…

“Robert? Still with me, buddy?”

“Yeah, sorry. Anyways, you were saying?”

“It’s cool, man. We can talk more when we see each other. We lost so much time, Robert. I know we can’t make it all up when you come down here, but it’s a good start, right?”

Different from many second chance - or in this case reconnection - stories, Robert and Jake start out wanting to see where their long-ago and previously suppressed feelings might go when given a new opportunity. There are no regrets, there is very little angst, and I found that quite refreshing. The setting of Jake’s somewhat secluded place is ideal for them to figure out if reality imagines their imaginations. Robert is a sports reporter, and faces the same prejudice many athletes do. He cannot come out if he wants to be recognized and get the interviews he needs without problems. When he is told to do an in-depth interview with Jake, whom he remembers from high school and whom he’s had a crush on for years, he jumps at the opportunity. And when he finds out tat Jake is still interested him, he us surprised, a little shocked, and very hesitant. Jake has no such issues. He plays baseball, in the minors, and is hoping to make it big at some point in the future. The fact he cannot possibly come out without damaging his career is undeniable. For him, knowing Robert won’t want him to go public is very reassuring. He goes after Robert without hesitation, and it turns out he can be extremely charming and very convincing. If you’re curious about a story where both characters have to stay in the closet for career reasons, if you want to know how they deal with reconnecting, and if you’re looking for a short, fun read with a happy for now ending, then you might like this short story.

From MMGoodBook Reviews This is a cute and very hot little story that will leave you wanting more. I love the way the characters just flow off the pages of the book. Robert has always wanted Jake, but never made a move or said a thing. That is until his boss at the Daily Read sent him to talk to the up and coming sports star. They had known each other in college but things never went any far forward till now. They both agreed that they never wanted to come out, or at least not now but things start heating up really fast. I think that this story was a big hit to me. It comes off as so damn real, although I wished that they were both out and proud. The sex between them is so damn hot and left me wanting more of it. It gave me almost everything I could possibly want in a story except for the fact that I want more. I wished it were longer with more about their future. Michael is one fascinating author who always gives me what I want and I look forward to reading more. It caught my attention from the start and kept it all the way to the end. Trust me you have got to read this book.

I loved this little story so so much, I love it when you connect with a character so quickly because they are so well written! Robert is an average guy who wants a chance at love just like everyone else, he is fearful to step out of the closet with his job in the macho world of sports journalism, Jake is the man he has been looking for, but at what price? Don&#039;t miss this one people, it may be short, but it is oh so sweet!