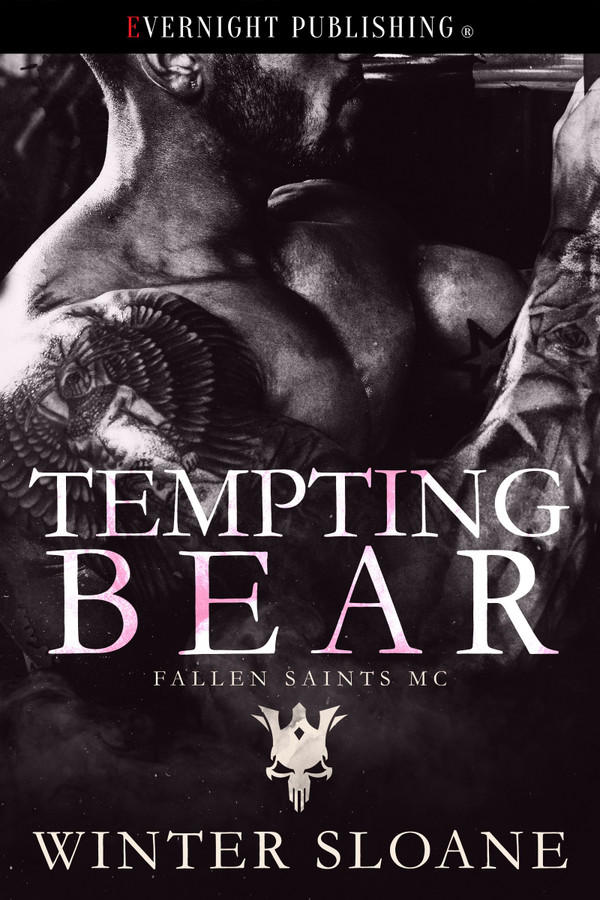 Bear:
When I made a promise to a dying man, I didn’t expect to fall for his daughter. Lara’s too young, too tempting for her own good. Keeping my distance isn’t option. Lara’s old man left her in deep water and I’m her only way out. The only payment I demand is her. I’ve killed. I’ve stolen. I’ve broken more laws than I can count but Lara’s the only thing I truly want. Her father only told me to protect her. He never said I couldn’t keep her.

Lara:
My father taught me to avoid men like Bear my entire life, but I’m not intimidated by his tattoos or his dark past. I shouldn’t want him. Bear’s uncouth, rough, and too old for me but I can’t help it. The more time we spend together, the more I want to become his. Can I uproot my entire life and give my heart to a man who lives and breathes violence?

She approached him, tentatively at first. Then determination lit her eyes. She took off the jacket he loaned her, letting it slide to the floor. Lara stood merely an inch from him. She pressed her palms against his chest.

Fuck, but hearing her utter his name like that, full of neediness and want, made his dick hard. Bear wanted to rip her dress to shreds. To flip her on her hands and knees and rut her like a beast.

“Yeah, baby?” He slid a hand up her smooth cheek, resting it there.

“That’s grief talking, baby. I bet it hurts like a bitch, but it’ll heal over time.” Bear didn’t even care they were using each other for sex.

She wasn’t just a simple hook-up for him. Bear had only known her for two days and yet he already knew. He wanted Lara to be a permanent fixture in his life. To make her his old lady. Screw the logistics. They’d figure the details out later on. Right now, Bear wanted to let their bodies do the talking.

“You sure?” she asked. “I don’t know where I have room in my heart for grief. I hate him so much.”

“Shush. Don’t think about him at all.”

She laughed. “I don’t want to do any thinking at all.” Lara closed the distance between them.

He closed his hand over the back of her neck, preventing escape. Bear kissed her long and hard. A preview of what he’d do to her sweet, young, and tempting body later on. He slipped his tongue down her throat, and she sucked down hard on it.

Bear pulled away, and she panted, staring at him with wide and hungry eyes.

He growled out one word. “Bed.”

She had no complaints. Lara grabbed his hand and led him past the living room and right to her bed.

She did as he asked. Bear unzipped her dress, and he didn’t rush. He wanted to savor every single second of this. Black velvet peeled open, revealing the slender curve of her back. He kissed her on the spot between her shoulder and neck. Then Bear bit hard, leaving a hickey there before undressing her fully. Once the fabric pooled at her ankles, he stepped back. Lara kicked the dress aside and turned to face him.

She wore matching white lace panties and bra. White. The color of innocence. He groaned. “You’re killing me, baby.”

Bear and Lara will burn up your sheets. Make sure that you are prepared. I loved this book and I thought it was exciting

This is the sixth book in the Fallen Saints MC series. It&#039;s a fast-paced and standalone book that will keep you engaged from start to finish. This is a story about a H who is to keep his friends daughter safe at any cost. When they meet its love at first sight and decides that he&#039;s going to keep her. Read to find out what happens. I received a free copy of this book via Booksprout and this review is my own opinion.

Tempting Bear is a great fast paced, age gap, insta love read. Bear and Lara&#039;s story comes in hot heavy. When he meets his best friends daughter she knocks him off his feet and there&#039;s no turning back. An excellent quick read.

This is book 6 in Fallen Saints MC love story for Bear and Lara.That is one way to introduce yourself and find your soulmate all in one. I loved the drama and little bit of danger these pages hold. I received a free copy of this book via Booksprout and am voluntarily leaving a review.

I love Bear. This man may be intimidating to his MC brothers or the enemies who cross him but his name should be Teddy because you just want to squeeze and cuddle with him. Lara is stronger that she thinks she is. She takes the weight of what her dad left her but if it wasn&#039;t for her dad, they would never had met. I love them together and how easy it was for their insta even though trouble finds them. I received an ARC for an honest and voluntarily review.

I love all of the “Fallen Saints MC “ series. I cannot say enough about Winter Sloane and her art of capturing the readers mind in her stories, in Bear and Lara’s story, as I was reading their story it felt like I was watching their movie right in front of me. That is how all of this series felt to me. That makes a great writer. Hope to read more about this MC.