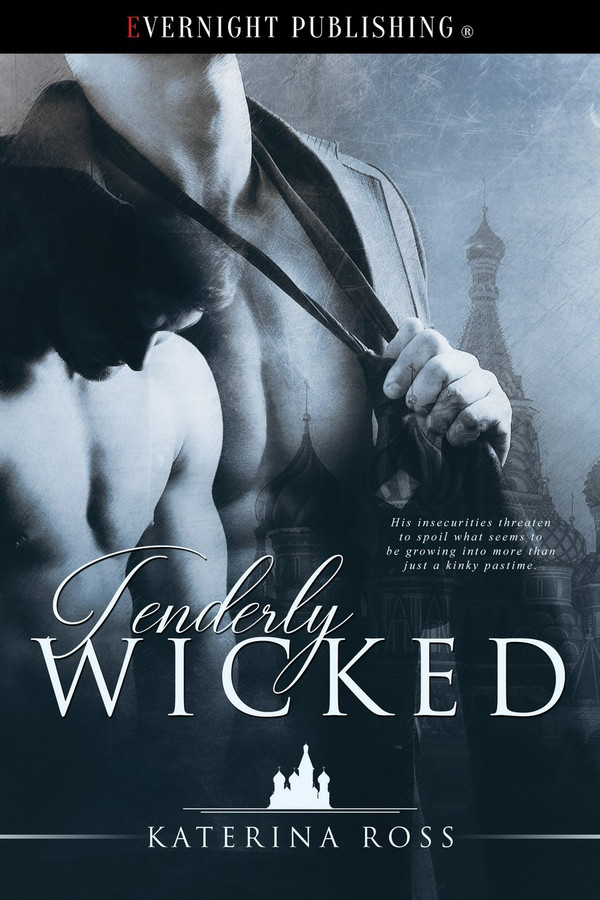 He woke up in the middle of the night, and the first thing he felt was a light wind. He wondered dimly, still half-asleep, if the poorly closed fortochka had opened on its own accord. Then he discovered something was missing from the bed. Namely, Vadim.

The balcony door stood ajar. Max hastily threw on his jeans, grabbed his shirt, and went to investigate.

Vadim stood on the balcony, smoking. He leaned against the railing, his spine arched, which presented his rear end in the most enticing way. He’d put his clothes on. Good for him. The nights were still warm, but not enough for one to linger outside in a state of undress.

Max watched him for a while, admiring his—um—posture, and then slid out after him. “Why aren’t you asleep at this time of night?”

“Oh.” Vadim looked back across his shoulder, startled. “I woke you up after all. Sorry.”

Max put an arm loosely around his waist, and murmured into the crook of his neck, “Luckily, no one has to go to work early in the morning. I only have classes at midday.”

The railings were a bit rusty, but at night, everything was a decent dark gray color. There were no lights visible through the thick crown of the ash tree. Everyone seemed to be sound asleep.

“What’s keeping you up?” Max repeated, still holding Vadim from behind. “Are you thinking about your work?”

Well, that was a surprise. “Why’s that?”

Vadim leaned back, rested his head against Max’s shoulder, peering into the darkness. “I just don’t want it to be over, that’s all.”

“Neither do I. What’s the problem then?”

Vadim was silent for a moment. “It’s silly, I know,” he said at last.

Max pressed tighter against his back. “Of course it’s silly.”

He didn’t dare to admit aloud that it had been unexpectedly terrifying for him, too, to know that he now was responsible for someone else’s wellbeing. That was what worried him the most. Vadim’s pleasure depended on his decisions, on his planning … and almost nonexistent skills as a Dom. He wanted their relationship to last. He wanted them both to go into a dream-like state where nothing mattered outside the scenes he created, but what if he screwed it all up? It had been fine today, but what about tomorrow, and the day after tomorrow?

Max needed to get all these doubts out of his mind, and the only way to do it was to concentrate on Vadim and not on self-analysis. “You need to stop thinking too much,” he said sternly. “I suppose it’s my responsibility now to prevent you from doing that. Let’s keep you occupied. Given that you tend to neglect your health, I think, as your Dom, I should start a really strict correction training. First, you’re going to quit smoking.”

Vadim let out a laugh, the half-smoked cigarette still in his hand. “Believe me, I tried.”

“Because I told you so.”

A moment of hesitation. Then Vadim stubbed his cigarette against the rusty railing and threw it down into the darkness.

“How very compliant—and how very disrespectful towards public property,” Max purred into his ear. “What should I do now? Reward you for obedience—or punish you for littering? Or maybe both?” With one hand wrapped around Vadim’s waist, Max traced the other up Vadim’s chest and throat and chin until he parted his lips with the index finger. “Suck. Yes, like that. We need to do something about your disgraceful smoking habit. Save this pretty mouth for purposes other than pulling on a cigarette.”

“Yes, like that,” Max encouraged him. “Wet it. You’ll need distractions to cope. I’ll give you distractions. As much as you can take, and more.”

Vadim sighed. “Um, not much, but it helped.”

Max undid the button on Vadim’s pants, and his hand reached into the waistband. Vadim’s breath hitched as he felt a finger, moistened with his own saliva, between his buttocks.

“What if someone … sees?” he panted out.

“Hm. Then let’s give them a spectacle to watch.” It was highly unlikely that someone would, in the dark, through the branches of the ash tree, but Max chose not to reassure Vadim, and the thrill seemed to work perfectly on Vadim’s cock. Max started working on it with one hand, alternating strokes along his length with swipes of his thumb across the wet head, and plunged knuckle deep into Vadim’s ass at the same time, rubbing his prostate.

It didn’t take much time to bring him to the brink, but as soon as Max felt the tightness of Vadim’s balls and the treacherous pulse in his cock, he squeezed his fingers tight in a circle around the base of his shaft, preventing orgasm. Vadim bit back a growl of frustration.

“Not that fast,” Max warned him. Vadim squirmed in his arms but didn’t resist, too far gone for that, completely at his Dom’s mercy.

Katerina Ross’ &#039;Tenderly Wicked&#039; should be required reading for BDSM novices. It’s a delightfully cautionary tale of what can go wrong (and right) in a 24/7 lifestyle relationship. Max is a language teacher and US ex-pat, fulfilling his aspiration to live in Moscow. He’s only dreamed of domination. After all, who would want an average looking newbie who can’t fake an air of mastery. Summoning nerve to enter a club, he sees Vadim, smoking cigarette after cigarette in front, as if the gorgeous man is also nervous to enter. Vadim agrees to go home with Max without negotiation. Max is concerned about his sub’s negligence of his safety, especially when it is confirmed by bruises on Vadim’s back. It’s a pattern. Vadim has little respect for his body. While Max and Vadim have oodles of chemistry, neither man communicates limits. Ross indicates Max “was so excruciatingly nervous about doing something wrong that he wanted to get as specific as possible… and so shy at the same time that he didn’t dare to.” Vadim is scared to acknowledge his desires or distastes because his prior Dom abandoned him after Vadim wisely safe-worded. My heart broke as Vadim tells Max, “I knew of masochists of course, but nothing more than that they were sick perverts. A few psychos. I also knew about homosexuals to the same extent. If I was one of them, I must be not right in the head either, and it was better to hide it from others.” Readers know disaster awaits the new couple. Set in the luscious, gritty city of Moscow, &#039;Tenderly Wicked&#039; could be a travel log, with its generous descriptions. But perhaps the choice of cities isn’t by chance. Because Russia‘s prejudice against gays is government-instigated, Max and Vadim have no support to ask questions of seasoned BDSM community members. Will Max and Vadim be capable of honesty? Their road is circuitous. And yet, when they finally do communicate, they never break character. Ross conveys their words starkly, their emotions tucked in. And it flows just beautifully, poignant, yet realistic. In &#039;Tenderly Wicked&#039;, I was finally treated to answers I’ve hungered to pose. Aren’t sadists ever insecure? What questions would ethical Dom’s ask themselves as they learned how to provide pain without harm? If Dom’s enjoy the bliss of their sub’s, are they truly sadistic,? And who is serving whom?

It’s been a long time since I refused to get out of bed in the morning on Sunday because I simply *had* to finish a book. This just happened with Tenderly Wicked. It might seem strange to review a book by talking about a different book, but I would like to mention Lauren P. Burka’s short stories Mate and Whip Hand, which have been for years and years my very favourite bits of erotic writing. They are actually one story, in a way, featuring the same characters, Terry and D’Shane, a S/M gay couple who find each other and themselves when their sub/Dom relationship clicks into place. There was so much emotion for me in that story, in the way these two beautifully flawed characters discovered things about themselves through BDSM. The story had one major defect…it was too short… That is where Tenderly Wicked comes in for me. It has something of the same emotional charge… but it goes into a much more articulate exploration of the two characters’ journey, which is as much psychological as physical (maybe more). I have been swept away into this book since the very start. The moment Vadim made an entrance, actually. Vadim, whose point of view is never explored in the story. I know some Romance readers have an issue with this, but isn’t it how real life is? You fall in love with someone, and you never have the luxury of being into their heads. They are an unknowable mystery you can only explore day by day, skirting disaster, hoping to get the hang of them at some point. And that is what Max needs to do, as a Dom and as a friend, to make sense of this incredibly beautiful, strangely damaged, self-destructive, sweet riddle that Vadim is. I have been deeply moved and shaken by this character. And his final dramatic act… well, no spoilers, but, it completely blew me away. And I loved the Russian setting of the book. I enjoyed Max’s explorations of the Moscow streets and attractions as much as I enjoyed his explorations of Vadim’s slim, gorgeous body.

A Dragon for Sale by Katerina Ross