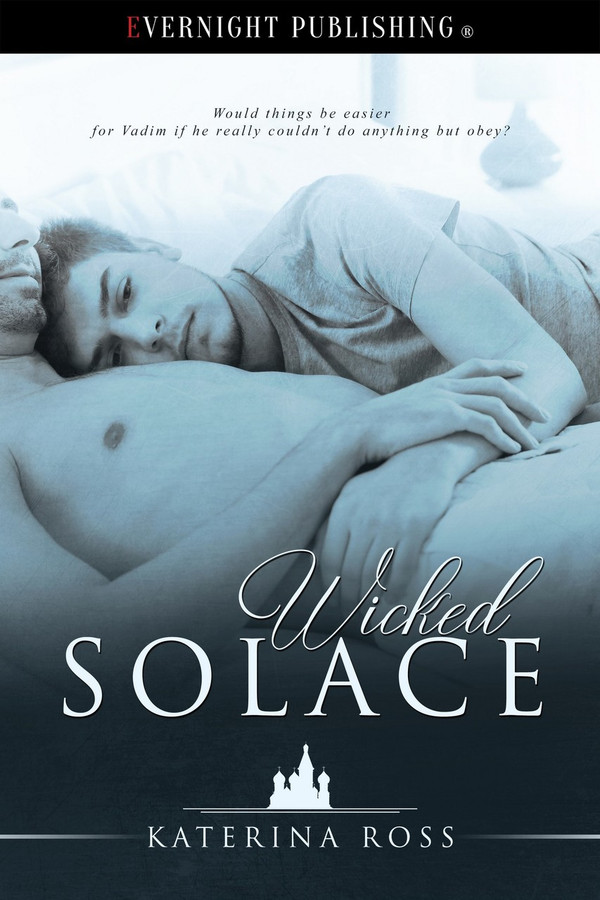 Wicked Solace is a companion short story to Tenderly Wicked, a novel about Max, an American expat in Moscow and newbie Dom, and his Russian sub, Vadim. Vadim has a problem with saying no—to his boss, his colleagues, and basically anyone, which often brings him trouble.

Max decides to play a game of what ifs and tells Vadim an unusual and somewhat wicked bedtime story, inventing an alternate universe where Vadim is a slave and his boss’s displeasure bodes more than just a reprimand. Would things be easier for Vadim if he really couldn’t do anything but obey?

The curtains were drawn, and the dimly glowing bedside lamp was the only source of light. This room could be anywhere in the world, anywhere in time. Behind the window, there must be a vast expanse of dark skies over the frozen Moskva River and dots of traffic along its banks, forming serpentine lines, but it was of no importance now, not for the two men in here.

Partly, this was his own fault, and it made him all the sullener. He shouldn’t have worked late, until the tension in his neck and shoulders had become almost unbearable and he’d started feeling like he had tiny grains of sand in his eyes. At least he should have stopped after that and returned home, to Max. But he’d chosen to ignore these warning signs because he’d wanted to finish some alterations to his project the client had requested. The small architectural firm he worked at was currently overloaded with commissions, and it was good of course, in terms of payment, but it also meant the boss was expecting everyone to play for the team and do extra hours, especially Vadim: he tended to never refuse. An exemplary workaholic, and sometimes in a rather self-harmful way, he could immerse himself into what he was doing so completely that he totally lost the track of time and forgot about eating and taking respites.

Max, being his Dom, tried to break his self-destructive habits, but they took over now and then, like it had happened today. And instead of having fun, they both were waiting for Vadim’s meds to kick in.

“I spoiled your evening. Again.”

Max scratched his nape. “Hmm. Maybe you spoiled your evening, but mine seems to be tolerable. I have a very naked sub in my bed. Why would I complain?”

“But you’re not doing anything to me!” Vadim protested petulantly.

He didn’t want Max to be angry, of course not, but it would have been so much easier to take a scolding or to tough through a SM scene with a headache than endure this undeserved sympathy.

“Actually,” Vadim added as an afterthought, “you could. I mean, do something. Whatever you planned for tonight. You don’t have to wait until I’m better.”

It was Max’s turn to sigh.

“You’re incorrigible. Tomorrow I’ll spank you for suggesting this. We’ll never be scening when you’re unwell. I think we’ve discussed it already, and not just once.”

“I’m sorry,” Vadim hastened to say—automatically, and thus not quite convincingly.

Max should have stopped petting him, should have gotten angry at last, but he didn’t, and Vadim pressed his head into Max’s caresses, both craving them and hating himself for this weakness. It would have been great to be pampered like that after an intense scene, but now? It was unfair he should get any relief after he’d screwed up.

And yet it felt so good…

I am always impressed by &quot;how much&quot; Katerina Ross manages to weave into her stories, even the shortest. So much atmosphere, a sense of place, and deep insights in her characters&#039; journey. This free read is a brief little foray in the world of Max and Vadim, the two MCs of Tenderly Wicked. It was delightful to meet them again, after their happy ending in that story, and find them deeply united, more intimate than before, more confident in each other&#039;s love. There&#039;s still some kinks to work out (or work in :) ) in their lives, especially in Vadim&#039;s life... and Max has a wholly original approach to the problem. It is of course an enjoyable read, but also a wonderful and delicate exploration of the complex interplay between fantasy and reality, the magic and power of storytelling, the sometimes dangerously thin line between shall we say, recreational masochism and self-destructive tendencies. Because the point of view is the opposite from Tenderly Wicked, we get to see Max through Vadim&#039;s eyes, and if in the first book it was easier (for me) to fall in love with Vadim, in this story I developed a strong admiration for Max. These characters&#039; feelings for each other just get under your skin that way. There are very few such shorts reads that can offer a reader so much food for both fantasy and thought.

A Dragon for Sale by Katerina Ross