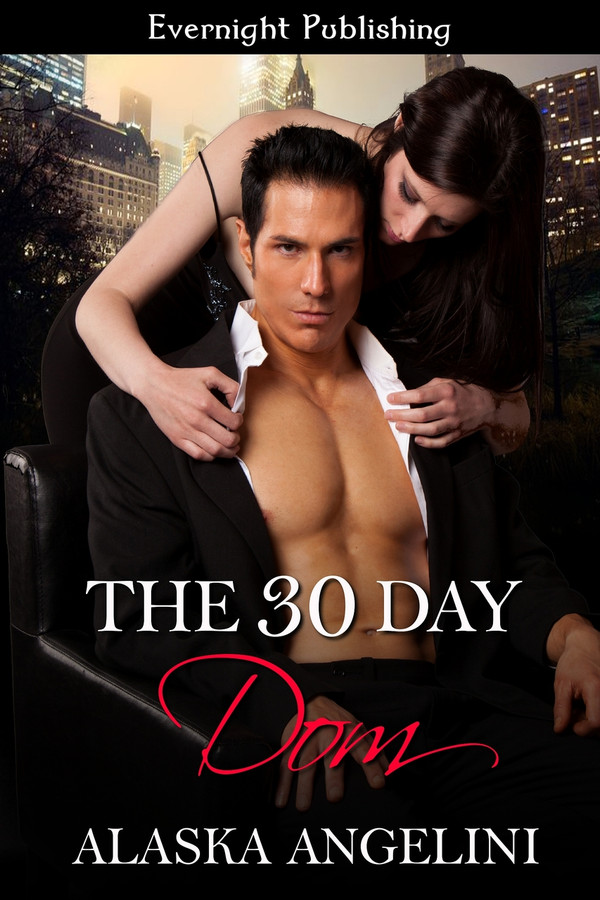 Cruz knows it’s time to find a sub. When he’s introduced to Jane, a protected sub from a private agency, they have an immediate connection. She’s everything he has always wanted in a submissive. Her need for protection is exactly what the Dom in him craves. But he can’t ignore the nagging feeling that he knows her from somewhere.

Jane’s attraction to Cruz is automatic. Her body burns for him, and he quiets her mind from the fears of her past. But one night of explosive passion quickly puts their Dom and sub relationship to the ultimate test. With her possessive ex-master searching for her, and an unplanned pregnancy testing their bond, can Cruz and Jane overcome the obstacles and find happiness? Or will Ben find a way to separate the two before they even get started?

“Come stand before me, doll.”

She immediately obeyed. Cruz loosened his tie and took off the cuff links. He rolled up his sleeves to just below his elbows.

“Next time you fear something, you call me. Me first. You belong to me, Jane. You’re my responsibility.” He stood and locked his arm around her waist, lifting her against his body. A gasp exploded from her mouth.

Cruz stalked to his room, tossing her on her stomach, over the bed. The dress she wore gave him a view of her thighs and he immediately gripped them, separating her legs, wide. “Do you understand me?”

“From there we’ll call Zevier. But it will be me you come to before anyone else.” He pulled the dress over her head, revealing a white bra and lace panties, and threw it down to the ground. The roundness of her ass was what his dreams had been made up of these last few days. He opened the drawer from his nightstand and saw her turn in the direction. Light reflected from the blade of his knife as he flicked his wrist and opened it. “Tell me you trust me, Jane.”

Her eyes went from the knife to his face. There was not an ounce of fear. “I trust you. One hundred percent.”

The thin material at her hip gave way under the sharp edge. Cruz cut the other side and pulled them off. “Fuck.” He cut the back of the bra and tossed the knife back in the drawer. His hands gripped both sides of her ass. “I’m going to enjoy this.” He squeezed and heard her breath catch. “You’re going to get your punishment now. I can’t tell you how much your dismissal affected me. I really thought we’d gotten close enough these last few days.”

“Be sure that it doesn’t. Before I start, your safeword is New London. I’m pretty sure you won’t forget that.” He picked her up by the waist and sat on the bed. Jane fit perfectly over his knees. He watched her bra fall to the floor and reached over, rolling her hard nipple between his fingers. “Repeat the safeword so I know you heard it.”

He smiled. “Good girl.” His hands went back to gripping her ass. The view of her shaved pussy was something he hadn’t expected. But he couldn’t deny that it tested his control. He couldn’t wait to be buried deep inside of his new sub.

Pressure against the bottom of his sac had his eyes looking down. Jane moved her fingers over the material of his pants again and he didn’t wait. The sound of the spanking echoed throughout the room.

“You know better than that, Jane.” He brought his hand down over the same spot and watched her head fly up. “No touching unless I tell you.” Red was already beginning to glow on her ass. Just seeing his mark on her sent a wave of possessiveness through him. Jane was his now. The moment she’d allowed him to lock that bracelet on her wrist, he owned her. It may have been a little soon to make that decision, but he couldn’t deny the connection he felt with her. Now he knew why.

Wetness greeted his fingers as he traced them down her swollen folds. The response of her body to what he was doing was what it was all about. He wanted her to enjoy it. Thrive under his rule.

Cruz slid his finger over her clit and massaged circles into the sensitive area. A moan filled the room while Jane gripped against his calf muscle. After a few minutes she began to squirm, and he loved it. “Whom do you belong to?”

He moved to her opening and traced the tip of his finger, just inside of her entrance. “And who do you come to when you need something?”

“You.” The response purred from Jane’s mouth. He eased his finger inside, feeling her envelop him tightly. Cruz used his other to spank her bottom, again. At her pussy clenching against him, a growl tore from his throat. Dammit, he wanted her more than he’d wanted anything in his life.

“Sir, please.” She moved against him, beginning to squirm.

“No. Rein it in. I’m not giving you permission yet.”

Jane’s nail dug through the pants, into his skin. Cruz closed his eyes, feeding from the pain. From her pleasure. He stilled his fingers and lifted his other hand, bringing it down on her ass.

Darkness took over his smile. “Watch out, Janie. Anything covers a vast amount of possibilities.”

She continued to move. “For you,” she turned and looked at him, “I’d do anything, Brandon.”

The use of his birth name from her mouth had his heart all but stopping. No one had called him Brandon since high school. Cruz stared at her flushed face in awe. This was what he’d been waiting for. A sub that not only stirred emotion within him, but one who was willing to embrace who he was. And Jane did that. That, and so much more.

Jane lifted her head and peered back as he strapped her in. To see her under his complete control was an amazing site. The longing in her eyes drove him forward. It was time to show his Janie what it meant to be his sub, and him, her Dom.

Cruz is a hot and sexy man who is realistic about his needs. While he is embarrassed to want a sub, he still calls a friend for help. Cruz walks into this relationship with Jane with his eyes open, knowing that she might be in danger. I loved how Cruz is willing to rearrange his life not just keep Jane safe but make her happy. Jane ran from her last Dom, Ben, and he is still looking for her. Cruz is willing to train her for thirty days and then they can reassess the situation from there. I found Jane to be a strong person. She is running from one Dom but willing to keep trying BDSM. The chemistry between Cruz and Jane is blistering. I loved how once they started to get to know each other they found out how much they had in common. The sex scenes were realistic including Cruz and his wanting to wait and not hurt her or the baby. The 30 Day Dom by Alaska Angelini is not part of a series but I can easily see one come from this story. I would love to know more about this agency that matches subs and doms together. I found this book to be well written. The main and secondary characters were interesting and realistic. I had a hard time putting this book down. It drew me in and did not let go until the end leaving me wanting more. Overall, this was a great book.

I really enjoyed Cruz and Jane&#039;s story. I loved how these two felt an instant attraction. They had to deal with Jane&#039;s crazy ex-master. They went through a lot in a short amount of time. This was well written and I am looking forward to reading more by this author.

The 30 Day Sub by Alaska Angelini