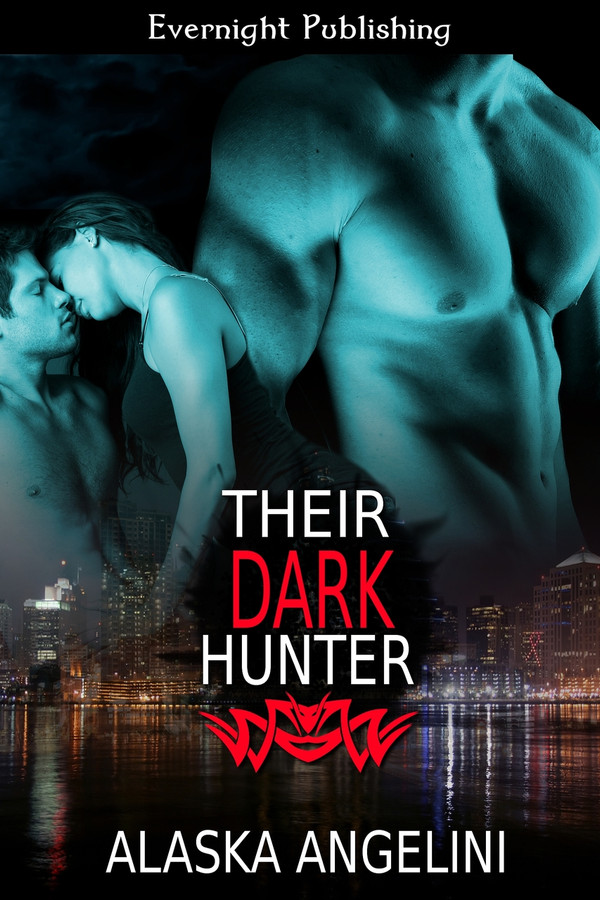 No one is a better demon master than Vex. He’s thrived in his role at taking charge of the city. But things change when a demon hunter starts taking out his men. In his own club, no less. The moment the dark hunter starts playing games, he and his master-in-training are all too willing to show her the rules.

Only thing is, will the three of them be able to see the consequences of their actions before it’s too late? Or will their bond open up a new life they could have never even imagined?

Melody held perfectly still even though her pussy ached to rub against Trace. She wanted him so much that it was driving her crazy. The darkness within swirled, tempting her. Something wanted out, and she had no idea what it was.

Vex’s hands gripped her ass and she moaned as his tongue traced over her back opening. Her mouth instantly found Trace’s. The need to move against him was automatic, but with his hands holding her still, it was impossible.

His tongue disappeared and she could feel him moving his mouth up and down her mate’s thick length. Trace’s tongue massaged against hers and she dug her nails into his shoulders. Pressure rubbed against her opening and she rested her forehead into Trace’s, trying to catch her breath.

“I want to fuck your ass while Trace fucks your pussy. Let me call your demon, again, Mel. You can take it if she’s in control.”

Just the thought of both of her men pushing deep inside of her was the ultimate temptation. Not to mention that she was dying to have control to be able to move again. The tightening in her core was growing with each thrust from the tip of Vex’s finger.

“Mel, just one more. I won’t call her again unless I ask first. You have complete control.”

His hand urged her forward and his other fingers eased deep into her pussy. Melody was nodding her head before she could think.

“Trace, you do it. You’re powerful enough now. Pull out her demon.”

Melody looked into his eyes and she knew there was something deep within her that was making him nervous. His stare began to glow and the tug on her insides was automatic. She felt her gaze grow big at just how powerful he was. He was almost every bit the master Vex was, he’d just done a hell of a job hiding it.

A tint covered her vision and she knew the demon had surfaced. Trace looked away the moment the darkness surged though her.

“Good job.” Vex rubbed lube over the opening of her pussy and ass. A deep moan poured from her mouth. Stinging erupted on her ass at the slap of Vex’s hand. “Lift a little, doll.”

Melody thrived against the pain. She leaned forward against Trace and Vex’s fingers slid deep, only to immediately withdraw.

“You’re so fucking ready for us,” Vex said, molding himself against her back.

“Relax, Melody.” Vex rubbed his cheek against hers. The order had her whole body reacting to his command. Her head settled in Trace’s neck and she sucked his skin lightly into her mouth. He pushed deeper into her pussy, just as Vex eased a good two inches into her ass. “Good girl.” Her master leaned forward and kissed Trace. His movement had him sliding even deeper. The friction between both of their cocks going into her at different rhythms was an overwhelming ecstasy she’d never known before. Now she almost knew how Trace felt as he fucked her and Vex fucked him.

A cry came from her mouth as Vex withdrew and entered her fully. The orgasm that shook her body was automatic and hit her hard.

His eyes didn’t break from hers the whole time he kissed her. He held her locked with his stare, and she was surprised given how he didn’t want to keep contact, before.

At the intimacy, something began to swirl in Melody’s chest. It was that part that she’d been repressing. The more she felt love for the two men giving her pleasure, the more it grew. Fear started to take over, but the sensations from Vex and Trace were throwing her off, making it impossible to rein the feeling back in.

“Keep looking at me,” Trace whispered. “Don’t you dare let your mind take you over…I want you in this moment every second.” His hand gripped into her hip and she continued to move slowly.

Vex kept a steady pace while Trace let her go at her own speed. They both were so thick inside of her. Need was triggered at their swelling. She continued to stare into Trace’s eyes, feeling the hammering pound against her chest. What was going to happen? She could feel the power building into a burning inferno.

This is a fabulous book I highly recommend it. If you love hot hot hot spicy books this is for you ~ Love hot sexy demons and Alpha males this is for you:) Love kick butt heroines yes this is for you!! This book definitely help my attention and I will be revisiting it later on it is a keeper a very very enjoyable hot racy read!!! With a super plot too!!! I promise you won&#039;t be disappointed this book delivers I bought it after it 1st came out and was I ever so glad I did!!

The 30 Day Sub by Alaska Angelini

The 30 Day Dom by Alaska Angelini