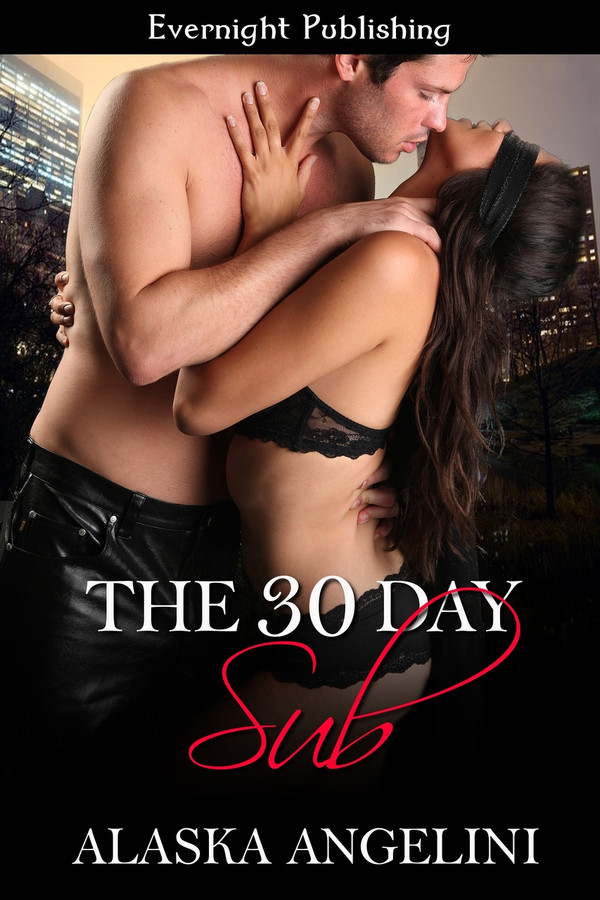 Cate craves a master more than anything. The moment she meets Torrance McLaren, her trainer, she knows that his firm hand and gentle heart are exactly what she needs to get over her weight and trust issues from her dark past. But Torrance is so much more than what she expected, and she quickly catches herself falling for him. Things turn hot, fast, and the temptation to give in to each other is overwhelming for both.

Even though Torrance knows he’ll only have Cate for a month, he claims her as his own. As long as she’s under his roof, she belongs to him. But her real master and his ridiculous rules about her diet quickly begin to get under his skin. Cate has gorgeous curves and a big heart. She’s the perfect submissive. But ultimately, not his. Will Torrance be able train her and send her to her real master, or will he risk everything for a thirty-day sub?

The slap sent pain coursing through her already sore ass. With Torrance locked into her hair, Cate couldn’t move at all. Not that she wanted to. Maybe deep down she’d wished this would happen.

“You hesitated before you did it. That only means one thing. You debated, and you knew there was a chance you shouldn’t. Yet, you did.” He spanked her again. Cate moaned loudly. Her hips moved on their own, unconsciously begging for him to touch her pussy. A cry came from her mouth as he did.

Pressure moved down her folds, rubbing the wetness around in circles. “Tonight, you’re mine. You may have a master expecting you in thirty days, but until he comes, you belong to me. Say it, Cate. Tell me who owns you.”

The sound of his belt unfastening was like music to her ears, yet she couldn’t deny the fear pumping through her. The fact that he could hurt her was real. She knew she shouldn’t trust this stranger for a second, yet, for some inexplicable reason, a part of her did.

Torrance’s knee pushed her thighs further apart. Leather from the end of the belt caressed her inner thigh. Cate dug her fingers into the sofa. The stimulation to her ass from his hand and now from this smooth material was pleasurably overwhelming. Especially when he started running the end of the belt over her slit.

“I’m about to pop your clit with this belt. And you’re going to fucking love it. And you know what? Tomorrow, when I go to the gallery, I’m going to wear this exact one, knowing that your juices are all over it. This moment, right now, is going to play back in my head. I’ll spend all day envisioning that sweet little pussy of yours.”

Cate jerked the moment the end made contact. She hadn’t thought that the few inches would have made that much of a sting. After all, it wasn’t like he had much room underneath there to work with, but the power that came from behind the thin belt nearly had her screaming with pleasure and pain. Still, she was nowhere near ready to say she was Tor’s whore. Hell, no.

“Fuck, yeah. We’re going to thicken that skin of yours up good.” His hand gripped her ass. The belt hit the floor, and he was suddenly breaching her opening with his finger. “Shit, you’re tight, doll.”  Another joined inside her and Cate moaned as he stretched her wider. “You’re going to feel so good around my cock when the time comes. Not tonight, but soon. Very, very soon.” The thrust picked up speed and Cate was pulled up, against his chest. His arm went around her throat. “You’re about to cum for me.” His fingers left her, and she held onto his arm as he pulled her into the kitchen.

Buttons from the front of her dress hit the floor, spinning around wildly. As Cate watched one roll under the table, she couldn’t believe what was happening. This was a scene out of one of her wildest dreams, yet it was happening for real.

Torrance’s hand cupped her breast. “Perfect,” he whispered against her ear. The moment his arm left her throat and he was gone from her back, the emptiness that washed through her was nearly crippling. The contrast of being consumed, and then suddenly alone was something she didn’t like one bit.

“Take off your clothes and climb on the table. I want your legs spread wide. Be ready by the time I get back.”

THE 30 DAY SUB is an emotional story about finding love in an impossible situation and deciding whether to follow the rules or follow your heart. Torrance has a reputation as an amazing trainer of new subs. While he is happy to use his skills to help out, he has decided he would like something more permanent. He finds himself in a difficult situation when a friend asks him to take a new sub, Cate, under his wings for 30 days to train her for her new Dom. Torrance is immediately drawn to Cate on an emotional level he&#039;s never experienced before. He tries to keep his distance because he knows at the end of the 30 days he has to give Cate up to her new master. However, when her master starts sending lists of training demands that Torrance finds ridiculous, he has a hard time keeping his emotions in check. While Cate is drawn to Torrance, she is determined to not mess up in her new role as a sub and she is committed to making her new master happy. When her new master arrives to get her at the end of her training, she is torn between staying with the man she has fallen for or going with the man she was promised to. This story was great. The emotional struggles of both characters trying to decide how they truly feel, how the other feels, and what rules they should follow kept me captivated. Of course I was rooting for Torrance and Cate&#039;s happily ever after, but I could see why it was important to both of them to stick to the original plan of Cate just being Torrance&#039;s trainee for 30 days. The author did a great job of working in delicate emotional issues like domestic violence and body image issues. All of these things factored into and had an impact on this relationship. This story was fun, steamy, and at times very emotional. I enjoyed it very much.

The 30 Day Dom by Alaska Angelini

Sub for the Lion by Angelique Voisen