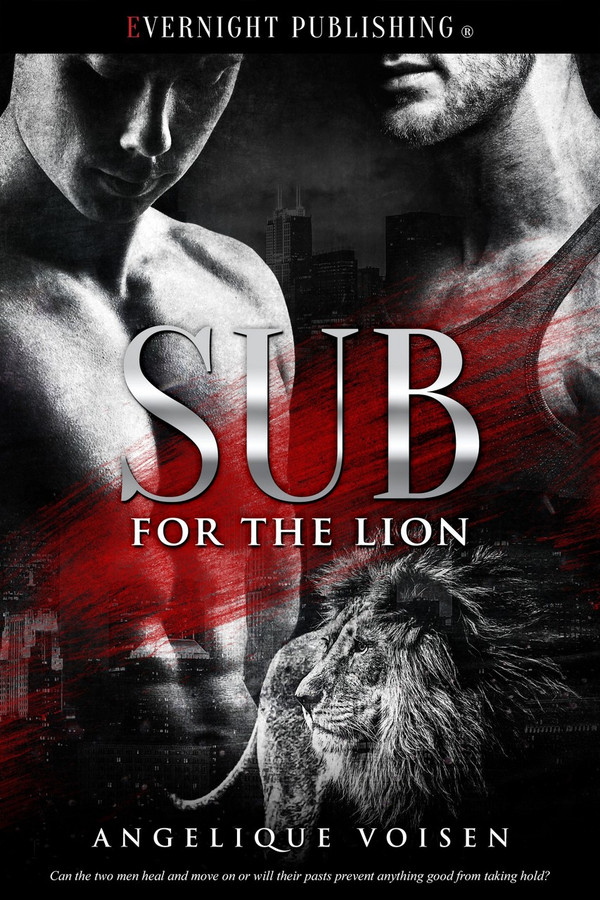 Can a broken lion and an ex-soldier fix each other?

Forty-year-old werelion Lance has retired from the lifestyle. When his mate and sub died, Lance thinks there’s nothing to live for…until he catches a glimpse of twenty-two year old Jax. When he sees the tattered soul behind Jax’s eyes, he unthinkingly agrees to do four domestic discipline sessions with Jax. As long as there are rules in place, Lance’s heart remains safe, or so he thinks.

Jax doesn’t understand his instant attraction to the werelion Dom. He’s frustrated by the rules Lance set in place. Four sessions, no strings attached—but what if Jax wants more? Old demons from the past continue to haunt him, but his time Lance helps him forget. Can the two men heal and move on or will their pasts prevent anything good from taking hold?

“Sir?” he whispers. This time, he says the word uncertainly.

I imagine taking those lips, wonder if Jax would yield to me or fight.

Fuck no. I’m better than this. Kissing seems so old-fashioned, so vanilla, and yet I want to taste Jax, feel the heat of his tempting lean body, crushed against my huge frame.

I brush my fingers over his bottom lip. The texture’s soft, slightly wet, perfect. Jax begins to lean into my touch. I should take a step back, let him in. Conduct the session. Late at night, when I’m alone again, then I can afford to wonder about what could have been.

A growl rumbles out of my chest. My lion doesn’t agree with that idea at all.

Then Jax says the wrong word, completely obliterating my resistance.

Fuck. How can I resist him any longer?

I shift my hand to the back of his neck, tug him close until our chest and groins brush. He rubs himself at me, like a cat in heat, denied so long of touch. I give him a punishing kiss, all roughness and bite, but that only triggers his response.

His hands are all over my body, and I let him explore. His touches are hesitant, inexperienced, as if he hasn’t been with plenty of guys. The thought only fuels my want. If he wants a real man, then that’s what he’s getting.

Jax begins to lift the hem of my shirt, but I pin his wrists one-handed, in front of his body.

I prod my tongue against his lips and he opens up, so I can deepen the kiss.

I know where this is heading, but I can’t seem to stop. My lion’s pushing me to drag Jax into our den and make sure Jax never leaves without our mark on him. I’m drowning in sensation, burning from the inside out with desire, and I’m not sure I can stop myself from spiraling downwards.

Two men, each dealing with their own pain. Lance and Jax are both living with their pasts. One man has lost his mate and the other man tries to deal with the after effects of his time as a soldier. Both are hurting, but maybe they can help each other. Neither man knows what to expect as they meet for their sessions. They need what the other man can give them but can they let go of the past and try for a future? Will love have a chance to grow or has the pain taken root and keeps everything out? Jax and Lance’s story may be a short read but it has a lot to say. Their story is packed full of emotion and turmoil. Each man must come to terms with his own feelings and just where he wants to go. Their attraction is evident from their first meeting but the two men must learn to trust again. Can they open their hearts and let the other man in or are the walls too thick? There is a lot of inner turmoil with each man and I enjoyed watching both men figure out what they wanted. From the first time Jax comes to do a session with Lance we see how hot the two are together and it only gets hotter between them. The two are good together; both in and out of the bedroom. Life moves on and it was nice to see Lance and Jax trying to move on along with it. Their story moves along quickly and had me right from the start. The author does a good job of bringing these men and their emotions to life. At times, it pulls on your heartstrings and has you hoping for love. These two men learn the hard way that love can heal if you let it.

Two broken men together can go one of two ways: either they will heal each other or they will end up more broken than ever before. Lance’s friends take a fairly big risk when they recommend him taking a “part time” sub to train, knowing that Lance has lost his mate and that, being a lion shifter who mates for life, he is not likely to be able to have another relationship. But Jax needs his help – with PTSD and other issues to deal with, he needs to forget, and submitting is the only way he knows how to do that. Jax and Lance connect from the beginning, but neither is ready to admit what is going on. Well, Jax gets there fairly quickly but he doesn’t believe he has anything to offer. Lance’s lion knows what he wants, but Lance the man has trouble moving on. One misunderstanding leads to the next, and even though they are hot together in the playroom – not to mention the bedroom! – Jax and Lance each have some problems to overcome, miscommunication to surmount, and hope to discover and believe in before any true healing can begin. If you like watching men dealing with loss and pain on their way to happiness, if a lion shifter and an ex-soldier sound like a good match to you, and if you’re looking for a short, hot read, then you might like this short story.