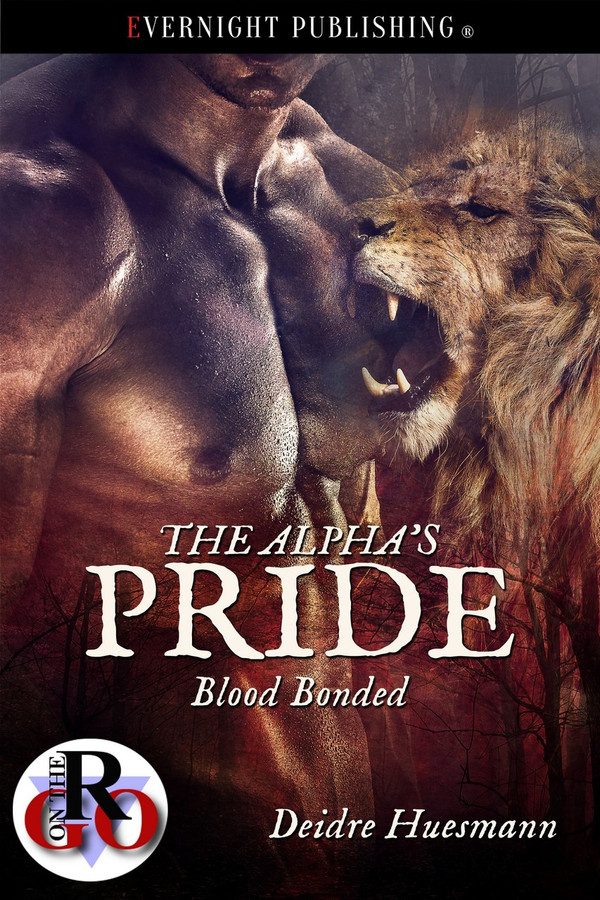 In a world where humans and shifters live in fringe societies, Val is taking a risk camping in the woods on shifter territory. Her overconfidence lands her in a game of life and death. This shifter is out for amusement, and doesn’t care if she wants to play. The game is set, and she must participate. He offers her a deal: if she wounds him, she wins. If he catches her, she dies.

Riker has every intent to kill her. Or did, before her scent hinted she is a potential blood bonded. Intrigued by the possibility, he pursues her in a hunt that will change their lives... and forever alter shifter and human societies.

“The last human female who ran from me tried to claim she was in heat and not in peak condition because of it,” he warned. From her vantage point, she couldn’t see him, but the voice came somewhere from the northeast. He only crept closer, which sent a cold sweat along her body. “Didn’t work so well for her, and it won’t work for you, either.”

In heat … does this idiot not know what a period is? They’re not the same thing!

Holy shit, I’m going to kick his teeth in.

Val drew the quietest breath of her life—and finally saw him.

He stepped out from behind an enormous tree, the sun turning his hair into a golden halo. It completely juxtaposed the hunger in his expression, the slight curl of his mouth that spoke volumes of his wicked intents. Even from where she sat, she noticed the cut of muscle in his arms, the equally straight and lax confidence of his posture. His eyes scanned the ground ahead of him.

He wasn’t looking up. He stared dead ahead, to the east of her, and walked with frightening silence. Not even the grass rustled in his wake. Soon he paused almost directly beneath her. It was a good ten-foot drop. If she did this wrong, she’d break her neck.

If she did nothing and he saw her, he’d break her neck.

Val closed her eyes, said a quick prayer in her head, and jumped.

It was pretty good story. It&#039;s not for sweet lovers, Tthough, because it&#039;s rough. H alpha has no sweetness in his bone. He&#039;s alpha, so he&#039;s arrogant, cruel... In one word a d***. Though, he still had something that draw me. Those barely noticeable someway soft moves towards h... Its kinda was love/hate relationship for me where he is concerned. h was pretty kickass. Though, she wasn&#039;t strong or fast as shifter, she was able somewhat to hold on against them. I do hope there will be series. Because though this ended in HEA, it still had somewhat unfinished backround story between humans and shifters, that I want to know more of. You see, they aren&#039;t at war but they aren&#039;t on friendly terms either. They live separately and humans are seen as beneath by shifters, since they are stronger, faster, can shift and blah blah blah.... You get my drift. They are so conceited, that you wanna to kick theirs sharp theet in. And so, for shifter to mate human is a big deal. A possibility to start something new. So, I&#039;m curious who will be next to find blood bond in human? And if the shifter accept it or fight it?

The Alpha’s Pride by Deidre Huesmann is rockin’ a five star rating from me! My only problem with this book? It’s far too short!!! I want to know more about this world in the worst/best possible way. The plot of The Alpha’s Pride is truly fantastic. It drew me in and kept me on the edge of my seat! I loved the interaction between Val, who is human and Riker, who is not. Riker has decided that either Val is his “blood bond” or she is his dinner. Val has a few decisions she has to make in a very short amount of time. She is tough, resilient and fierce. In short, my kind of woman. She is able to hold her own against all comers. There are some willing to challenge her, but she is written strong enough to put them in their place. I am looking forward to new stories set in this world from Deidre Huesmann. Way toGo!!!

I read The Alpha’s Pride by Deidre Huesmann and I give it a 5/5. Val realized too late that camping in Shifter territory was a bad idea. Now at the hands of an Alpha shifter she must choose to run or fight. Riker loves the game that he plays with humans; if they can wound him first then they are free. There is something different about the human that he finds that day; her scent calls to him like no other. He believes they are potentially blood bonded, but, he still has to test her if she can’t win the game then she can’t be his mate. After winning the game she must choose to leave or mate Riker and stay by his side forever. Riker knows that his pride is not going to take kindly to their Alpha choosing a human mate. Will Riker be able to keep his pride under control? Will the pride ever respect Val as their queen? If you love hot blooded muscled up shifters you will love Riker and this book.

The Alpha’s Pride by Deidre Huesman is a five star story, I thoroughly enjoy paranormal story and this was no different. Shape shifters are by far my favorite characters and stories and this author did not disappoint, Shifters and humans are walking on thin lines between each other’s society. Val decides to go camping in shifter’s territory. She is discovered by a shifter and he decides to have some fun and tells Val that they are going to play a game. Riker tells Val that if she wounds him she may go free but if he catches her she will die. Riker is planning on having fun and then killing her, but then he catches her scent. Her scent hints at the possibility of her being blood bonded. Will Riker continue the game? Will they be able to overcome their differences? This is a very good short story, but very well crafted by the author.

The Alpha&#039;s Pride by Deidre Huesmann 5 out of 5 stars This is the first book that I have read by Ms. Huesmann it was a short cute story that contains shifters and I love reading about shifters/paranormal. This is a story where humans and shifters live in fringe societies, Val is taking a risk camping in the woods on shifter territory. Her overconfidence lands her in a game of life and death. This shifter is out for amusement, and doesn’t care if she wants to play. The game is set, and she must participate. He offers her a deal: if she wounds him, she wins. If he catches her, she dies. Riker has every intention of killing her. Or did, before her scent hinted she is a potential blood bonded. Intrigued by the possibility, he pursues her in a hunt that will change their lives... and forever alter shifter and human societies. Will Riker’s pride accept Val as his blood bonded or will they kill her? Can they overcome their shifter/human differences? Will their blood bond change the world between the shifters and humans? You really need to read this short story in order to find out the answers to my questions. I highly recommend this short story and can’t wait to see what the author has in-stored for us next in this series…

The Alpha&#039;s Pride (Blood Bonded Book 1) by Deidre Huesmann is a paranormal-shifter romance story. You will love how this author has created a story that will keep you engaged until the last word. She will pull you in from the first word. Her writing style is just as great as her characters. I also loved her attention to details as they made you feel like you were right there with the characters. These characters will take you on a journey between shifters and humans. Find out what happens when a shifter meets a human that just may be his mate for life. Val is camping in the woods in shifter territory but will her over confidence leave her fighting for her life? The shifter is out to amuse himself, will it matter that she just doesn&#039;t want to play with him? Her problem is that the game has been set, she has no choice. What he offers her is that if she makes him bleed then she would be free to go but if he catches her first, then she is to die. He has every intent on killing her but the problem would be is that her smells could point to his potential blood mate. Are they prepared for a hunt that could change their lives forever? These two characters together are great and really very compatible. Together they are hot and steamy. Will she prove her worth to the rest of the pack? Will he convince her to blood mate bonded with him? He is a strong alpha male that knows how to handle himself and he is gorgeous to top it off. She is very confident and knows what she wants and how to do get it. I loved that she was not afraid of him or the members of the pack. They will keep you reading until the last word and still wanting more. The secondary character is just as strong and is not afraid to make her opinion known. Will their be trouble for them? Will they bond to each other for life? I am not sure how many books of Deidre Huesmann but this is my favorite yet. I can&#039;t wait to see what she does with this story next. I am just sitting on the edge of my seat waiting for more. Deidre works in her local shipyard, dressed all in safety gear and getting her hands dirty. When she isn&#039;t in the shipyard or writing you can usually find her catching up on her reading, kicking it with her children and playing video games. I loved how fast paced this story is. You will be at the end of this story before you even realize it. There is a few twists and turns that will leave you sitting on the edge of your seat on minute and the next needing ice water. Find out what happens to these characters as they go on a journey of alpha males and human bonding.

The Queen's Strength by Deidre Huesmann