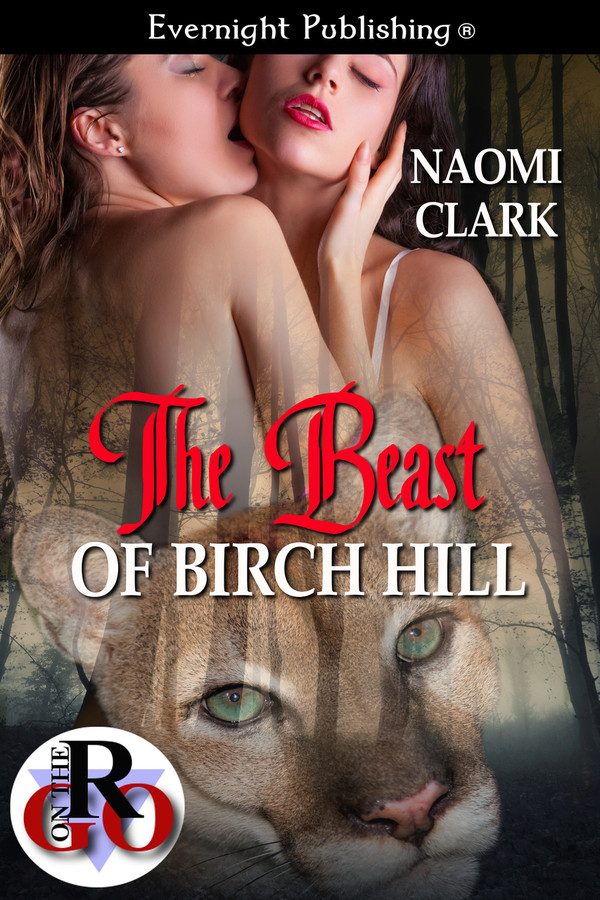 Wildlife photographer and cryptozoology blogger Emma Jordan came to Birch Hill expecting to find another urban legend. The rumors of a big cat stalking the woods around this quiet town surely had to be just that—rumors. But when the evidence starts to pile up that Birch Hill really does have a killer cat on the loose, Emma finds herself caught in a confusing game of cat and mouse. And her blossoming relationship with Abi Blakely might just be pushing her further into danger.

Emma awoke in a tangle of sheets to the sound of running water. She sat up, finger-combing her knotted hair, and looked around for Abi. The door to the en suite was open and she could just make out Abi's silhouette behind the frosted glass shower door. Her pussy throbbed, an almost Pavlovian reaction, and for a second she contemplated slipping in there with her.

Then her phone, discarded along with her jeans last night, started ringing. Cursing, but unable to ignore it, she leaned over the side of the bed to grab it. An unfamiliar number flashed on the screen.

“What happened last night? Where were you?”

It took her sleep-hazed brain a second to recognize the voice, and a second longer to realize Jed wasn't asking her about her sex life. “Something came up. I couldn't make it out there. Why do you care anyway?” she asked, realizing she sounded rude just a little too late. “I mean, we hadn't planned to go up to the woods together, after all.”

“No, but I went anyway. You city folks, you think you know the woods, you think you're gonna be safe, but you don't know shit, so I went to keep an eye on you. And guess what?”

“There was another kill!” he said, almost triumphantly.

“That's right. Big old deer, just slaughtered and left on the trail. If you'd been out there with your camera like you said, you'd have caught it all.”

“There's no guarantee of that,” Emma said. “But I'd like to come and have a look now, see if there are any more paw prints or anything.”

“Well, the deer isn't going anywhere,” Jed said. “Meet you at the trail's start in an hour, if you can make time for it.”

He hung up without waiting for her reply. Emma swore softly and tossed the phone across the bed just as Abi emerged from the shower. The sight of her wrapped in a mint green towel, her dark hair dripping water down her cleavage, was briefly distracting.

“Jed just called. He found a deer kill in the woods—the Beast strikes again, I guess. He's annoyed I wasn't out there to capture it all on tape.”

Abi frowned. “That can't be right.”

“This one seems to be killing for fun,” Emma said, climbing out of bed. “So I guess I should go take a look.”

Abi clutched at her towel, expression worried. “If you did find it, or get it on film or whatever, what then? What would you do?”

Emma shrugged. “I wouldn't do anything except blog about it. I'm not out to capture the Beast or kill it or anything. But if I do get proof of an alien big cat out here, I want to talk about it!” Her initial lack of enthusiasm at Jed's call was fading away. The thought of uncovering a mystery, even a small one, and sharing the answer with the world, was irresistible. And sure, there would be a mundane explanation—escaped zoo animal, abandoned exotic pet—but it would still be part of the bigger puzzle. That was worth getting excited about.

She went to kiss Abi as she passed to use the shower, but Abi barely seemed to notice. She was still frowning, staring at the bed they'd shared last night as if it suddenly just materialized there.

Abi smiled. “Sure. Maybe I can make it into dinner later.”

Emma laughed, but a touch of unease crept over her. The feeling didn't make sense, so she tried to ignore it. “I don't see why not. It's probably not going to be any fun though, with Jed there.”

“That's fine. I never expect dead things to be fun.”

This is one VERY short story. It comes in at only about 5 chapters. But it tells a good story in a small amount of space. Emma comes to Birch Hill looking for the killer beast and not only ends up coming face to face with it but bitten by it too. She also meets the beautiful Abi who runs a bakery and cooks a good venison soup. You could tell from the start that Abi not only cared about Emma but had a secret to keep. Jed on the other hand was a surprise. To hate yourself so much that you would willingly attack someone so that they can kill you…that has to be a horrible feeling. Emma might be starting out a new life, but at least she will have Abi there to help her. Overall this was an enjoyable 4 star read.