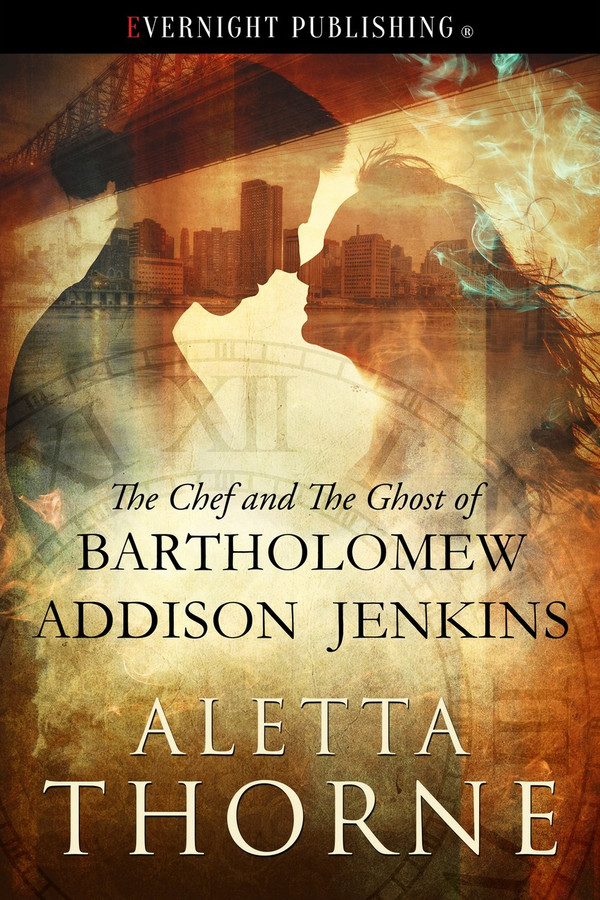 Halloween, 1982. MTV is new, poodle perms are the rage, and life just might be getting better for Alma Kobel. Her ugly divorce is final at last. Her new job as chef at Bright Day School’s gorgeous old estate is actually fun. But the place is haunted—and so is Alma’s apartment.

Bartholomew Addison Jenkins’ ghost has been invisibly watching Alma for months. When he materializes one night, Alma discovers Bart—as he likes to be called—has talents she couldn’t have imagined … and a horrifying past. Can you have a one-nighter with a ghost? And what happens if you decide one night is all you want—and end up ghosting him? Some spirits don’t like taking “no” for an answer.

Bart sat beside her, suspiciously close. He put an arm over the back of the couch, and Alma shook her head again. That’s the old sneaky-arm trick—like a high school kid. It’s kind of cute. She pulled her legs up under herself, and they quietly listened to the music.

“You’re right,” she said after a few minutes. “‘Fountains’ is really good, too. I almost never listen to that side.”

Bart made a quiet harrumphing noise.

Do ghosts clear their throats? Apparently so.

“Dear lady,” he said. “Although I do try not to snoop, as you would say, I have indeed observed your solitude. Let me assure you, your life will soon be happier.” He slid even closer to her.

Okay. Now the ghost is absolutely coming on to me. This is really happening. Oh, hell—why not? He’s not bad—for a dead guy.

“Um, Bart?” she said. His eyes really were a startling color—almost bronze… “You can’t actually be…”

Bart set his fingertips on her cheeks, looked into her eyes, and sighed. Then he smiled. “You think this is a ridiculous situation. It’s not ridiculous,” he said. “Not at all. Allow me to demonstrate … with your permission, m’lady.”

Somehow, that was funny, and Alma giggled. “Granted.”

Bart’s hands were impossibly soft and gentle—and his touch had some of the same fire-and-ice buzz that she’d felt before in the kitchen when he’d tried to get her attention. He guided her lips to his, and gave her what would have been a tiny peck—from anyone else.

I&#039;ve been a fan of Aletta Thorne&#039;s alter ego in the writing community for a good while, but this was my first dance with her under this name and in this genre. And what a dance it was! You can almost hear &quot;Sunglasses at Night&quot; pulsing through your stereo speaker as Thorne does what she does best: roll back the clock by a count of decades and drop you, the reader, into a time that no longer exists--and make you feel like you never left it. In this case, it&#039;s the 1980s, so … everybody have fun tonight, everybody Wang Chung tonight. With a ghost named Bart. Alma is a woman already haunted--by an ill-advised marriage she&#039;s only just broken free from, from financial problems that have reduced her day-to-day life to apartment living, from the almost forgotten dream of writing poetry for a living, and from her own misguided mother, a character so-well defined that even the most generous of souls will absolutely HATE her. But Alma finds fulfillment cooking for kids with special needs, playing a sort of older-sister role for her employees, and--unexpectedly--from the ghost of a man murdered in a duel hundreds of years ago ... As usual, Thorne works a complex character study into a deceptively simple story like it&#039;s no work at all. We buy books like this for the steamy romance thing--okay, for the sex, let&#039;s just admit that--but Aletta Thorne takes her work far too seriously to let us off that easy. We care for Alma, and for Bart (and for his once-rival--now ghost-buddy--Geoff). We care for the busybody health inspector, who turns out to be more than just a plot obstacle. And--oh, yeah. We get the hot sex too. Lots of it! So put down that Rubic&#039;s Cube and stop dreaming it. Be there. This journey back in time is a strange, wild, funny, romantic ride you will not soon forget.

First impressions definitely aren’t always accurate. What a hilarious main character Alma was! She could find a funny spin to anything that happened to her, from surprise health inspections at work to her strange and complicated interactions with her ex-husband. Some of the things that happened to her would have seriously annoyed or even frightened a lot of people. I loved the fact that she was able to quickly shake so many of those memories off with her fabulous sense of humor. The only criticism I have of this story has to do with how quickly the romantic relationship in it heated up. Both of the people involve in it were so cautious and meticulous in other areas of their lives that I never would have expected them to move as fast as they did. Yes, I definitely wanted to see them end up together, but it felt a little odd to me because it didn’t feel consistent with everything else I’d learned about them. With that being said, this is a minor complaint about something I enjoyed quite a lot. The world building was really well done. I especially enjoyed figuring out what ghosts were and weren’t capable of in this universe. Since nobody was given any instructions after they died, Bartholomew had to learn what he could do and what the consequences of those actions would be on his own. Him slowly discovering his abilities and limitations as the plot moved forward made it difficult for me to stop reading. I always wanted to know more about what the afterlife was like for him. The Chef and the Ghost of Bartholomew Addison Jenkins was as spooky as it was sexy. It should be read by fans of erotica and ghost stories alike.

Alma Kobel is recently free from a nasty divorce, the new chef at Bright Day school, and it seems both it and her new apartment are haunted. In spite of all of the changes things seem to be looking up, her job is more fun than she thought it would be, and her apartment in an old Victorian, despite her odd landlords, is great. However the men in her life start to make things interesting. A ghost, her alcoholic ex-husband, and the health inspector at her new job all vie for her heart. What is a girl to do with such choices? Stefan, her cheating, alcoholic ex-husband made her divorce horrid by finding any way he could to draw it out. Bartholomew Addison Jenkins’ or Bart as he likes to be called, the ghost at her apartment is handsome, suave, and way hot, even for a ghost, has an electrifying presence, and gives her experiences she will never forget. The other man in her life, Charlie, is the goofy, by the books health inspector that makes his rounds at her work who hides the fact that outside work he is an old hippy who plays the mandolin. Bart gives her a night she will never forget. Once she meets Charlie outside of work and he invites her to listen to him play live music she is charmed by the difference. A drunken Stefan makes an attempt to win her back, but is scared away by Bart who puts on a horrifying show that grosses Alma out. After a night hiding at Charlie’s she begins to think a live boyfriend offers more. But, soon her apartment breaks out in flames and after they rush to check it out see Bart walking from the flames with his last request to Alma … to join him. This story was just plain cute, I really liked it, there was a bit of everything mixed together. There were some funny parts, sexy parts, scary parts, nostalgic parts, (I love the time period the story is set in) with some good plot twists added in for good measure. You will not find the typical ghost love story here, you think you do at first, but the more you learn of Bart’s past and his later actions you begin to get a bit nervous for Alma. There was a lot packed into the story, but everything is wrapped up nicely at the end.

Alma is broke after her divorce but happy as a chef at Bright Day School’s where she is in charge of the kitchen staff and all the meals. The estate is fun, beautiful and did I mention haunted? Alma is shocked to find out she’s had a ghost at her apartment watching her for quite a while by the name of Bartholomew Addison Jenkins who died in the 1700’s. She’s also surprised to find that he is somewhat of a legend in town. A cute little story that takes place in the early 80’s about love, ghosts, and everyday life. The characters are relatable with a few little surprises along the way. The sparks that ignite enhance the story’s romance.

Though I am an avid reader of a wide variety of fiction, I seldom read romance, ghost stories or erotica. After reading this I may have to change my habits. Here is a quick read with vividly imagined characters, evocative setting in place and time and relationships which are both dreamy and steamy. Its plot is full of surprising twists and turns, and it&#039;s frequently quite funny too. And even a bit scary. The prose is fluent and fast-paced. Great hot fun. Highly recommended .

This book is simply adorable. It is not overly-hot but hugely entertaining, with sparkly dialogue, funny accidents (that steel scrubber, oh my! And the box of bread!), intriguing characters that you get to discover over the whole story. I was completely not expecting where the main characters would go... It is beautifully written. Those who accuse Romance of being predictable flatfooted prose about two dimensional characters might benefit from reading this. There is a lot going on, many different shades of romance intertwining for such a &quot;simple ghost story&quot;. I loved how nothing is exactly as it seems, and there were surprises until literally the last line before THE END.

A witty novel in the best traditions of spooky fiction. Although the setting is modern (and American), it reminded me of classic English ghost stories. It&#039;s nice that the main characters are not overly perfect - as it turns out, ghost storeis can be realistic. And it was interesting to take a sneak peek into what a chef&#039;s work in the kitchen looked like. I especially enjoyed the hilarious scene of hiding a sponge :)

A Thorned Rose in the Sand by Lea Bronsen

The Ghost of Her Ex by Aletta Thorne