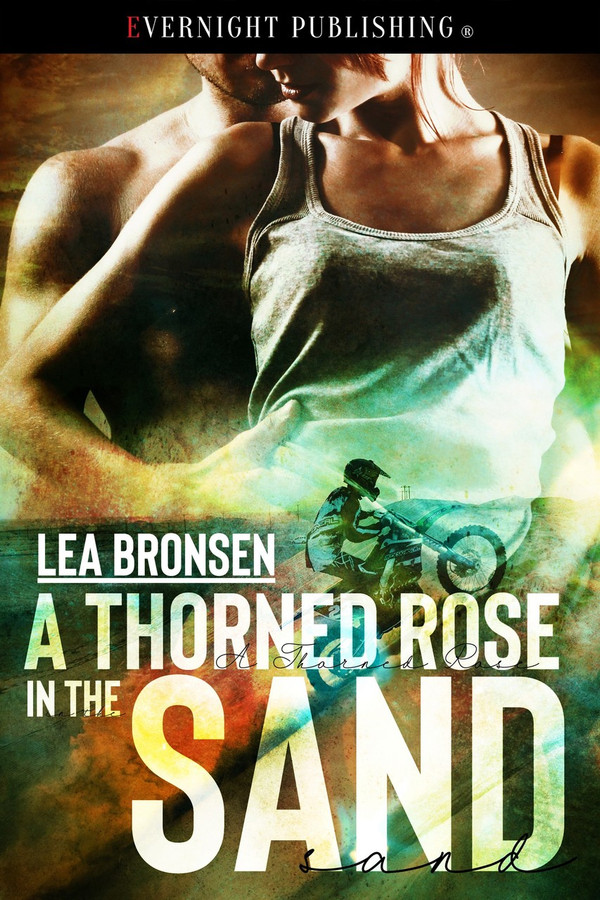 When life in a big U.S. city becomes too much, Stevie Jones decides to live her wildest dream--compete against the tough guys in a motorcycle rally across Morocco. But the real excitement is found away from the race track, in the shifting sands of the desert.

After his studies in London, Ragab has returned to the nomadic lifestyle of his Bedouin family and the majestic silence of the Sahara. He dreams of the perfect wife, until a beautiful but feisty biker stuck in a sand dune turns his quiet world upside down.

The girl screamed behind him. “Eeeeee!”

Too hard to resist, that girly scream! Until now, Ragab had had a difficult time respecting her privacy, but surely, a scream called for attention. What kind of a gentleman would he be if he didn’t check on a woman in distress?

He spun and found her kneeling on her jacket, nude and wet, arms outstretched in shock. He bit down a laugh. Yes, the deep well water was cold, but one got used to it, and in the extreme heat of the desert, it was a blessing.

She turned, caught him staring, and even though he couldn’t see anything inappropriate, she hurried to cover her breasts and pubic area. “Look away!” she shouted, voice panicky.

The laugh bubbled inside him, but he obediently turned back to the motorcycle—then stood in such a way he could see her reflection in one of the side mirrors.

Blood rushed to his groin. Stiffening, bothered, he tore from the sight, walked over to the well, and leaned against its waist-high wall, hoping the hardness of the bricks and coolness from the water below would temper his arousal before it became a full-blown erection.

He strained to hear.

He turned slowly and stole a glance from the corner of his eye.

She washed her panties and black top in the bucket and leaned forward to spread them in the sun. Her position exposed the dark pink lips of her sex, from the tiny hole in her butt to the end of her slit, where her clitoris hid.

Shocked to his core, he turned back and groaned low, his cock hardening again.

He closed his eyes, drew long, slow breaths to calm the painful throbbing and counted minutes, trying to think of something else.

Usain, for example. It would be cool to show her how to ride a dromedary. What if he rode another one, and they both galloped on the dunes together, she laughing, ecstatic…

Then they’d roll in the sand, and he would tease her thighs apart and slide his hungry hardness into her dark pink lips, to the wet bottom of her. Oh, yes.

He risked a glance in her direction.

Wearing one of his sisters’ dresses and looking divine with her red curls floating behind her—and her face white and clean—she strolled to the motorcycle, carrying a bag and her clothes. She stuffed everything on top of the fuel tanks, got up, lifted the dress to her knees, and started the motor.

Not once looking at him.

I was lucky to beta read A Thorned Rose in the Sand and can&#039;t recommend it enough. This book has it all. A whirlwind romance, an exotic location and sweet and sizzling moments expertly penned in Lea Bronsen&#039;s writing style, which easily drew me into a world radically different from my own. Ragab is a smart, considerate and sensitive young man. There&#039;s something about him that just squeezed my heart and wouldn&#039;t let go. Steve on the other hand is headstrong, resolute and sees the world in a way which complements Ragab perfectly. As an erotic romance this story doesn&#039;t disappoint. The sex scenes are HOT. I&#039;ll just say: hidden glimpses in the desert and wild camel rides. A Thorned Rose in the Sand is a must read!

First of all, make sure you clear your schedule before reading this because you will want to drop everything and book the first flight to Morocco, and that can be inconvenient you have other plans. The setting of this comes so deliciously to life, you want to go and see the bazaars, the dunes, eat the scrumptious food ... meet the hotties. Oh yes, the hotties. Ragab, deary me *fans herself*. And Stevie! I know nothing, absolutely nothing about motorbikes or rallies, but I immediately related to this stubborn, pesky, spiky, feisty girl. It&#039;s the kind of heroine I love most, dirty, sweaty, dusty, a real action woman, with a thick hide and a soft core. The story is wonderful. It explores (beautifully) the ways in which similarity and difference both contribute to make love happen. Stevie and Ragab have many things in common, but they do come from vastly different cultures. And yet this difference between their culture is exactly what is needed to bridge their reserve (I can&#039;t say more about this, or, spoilers). That was really magical. Well done, Lea. (also, now I want a dromedary)

I loved both Stevie and Ragab!! Stevie is a motorcycle racer who is tough as nails, completely independent and has no trouble competing with the boys. She takes on a race in the Sahara desert where she meets up with Ragab. Neither one really wants to fall for the other but this is a Lea Bronsen book so Yes, they absolutely do. I enjoyed this couple, the desert aspects, the cultural aspects and the story. If you haven&#039;t read any of Lea&#039;s work, you really should. Start with A Thorned Rose in the Sand and then pick up the other 14

Rekindling Their Faith by Sydney Lea