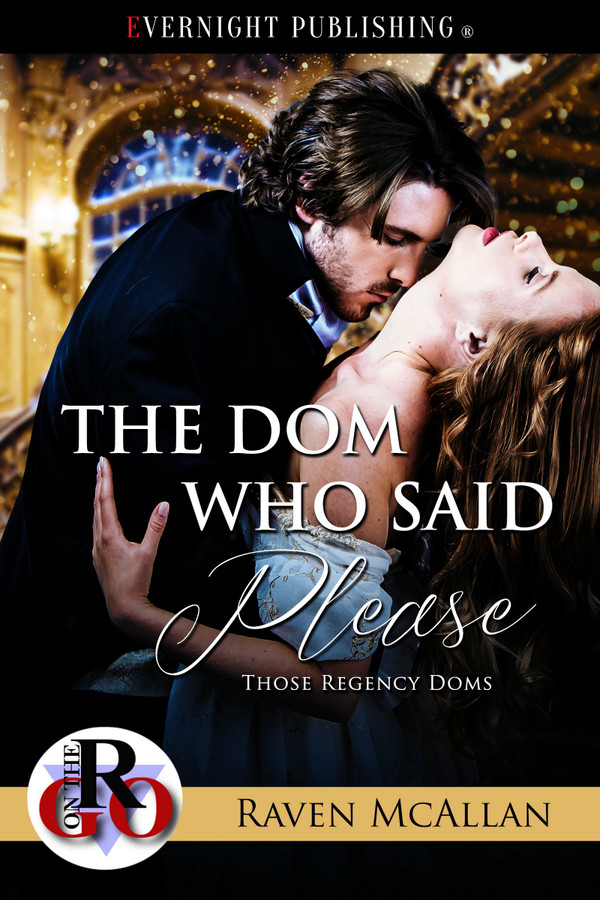 Widow Eleanor Charter knows one thing—she does not want to marry again. Especially not to someone forceful and dominant. So why is Theo Moncur, the Earl of Glensmoor interested in her? As far as she is concerned any man who considers himself dominant, whether he is or not, will play no part in her life. She will be in charge of her own life.

Dominant Theo doesn’t have marriage on his mind. Having given his mistress her congé, his growing attraction toward Eleanor makes him wonder if she would fill that place. He sees something in her that appeals. The lady would be a perfect submissive—not that she agrees. However, the more he gets to know her, the more he understands she is the only lady for him. Now all he has to do is persuade Eleanor to agree.

“Oh, my. I…” Eleanor put her palms to her cheeks and tried to stand up. Theo held her firm.

“It may be uncomfortable, but I prefer that to you on the other side of the room. If nothing else, it shows you how you affect me.” In addition, if the way her nipples showed hard and shadowy through her gown, and her cunt was clearly and lovingly outlined was any indication, he could bet he affected her in a similar manner. Somehow, Theo thought she didn’t realize just how much her gown showed. Of flimsy muslin with a delicate ribbon at the neckline … a neckline that barely covered those nipples he coveted, not a lot was left to imagination, even with a shawl draped over her. He decided not to mention it.

“That’s as may be, but is that the reason you are here?” Eleanor asked. “Because if it is … go away. I’m not interested in… Ouch.”

She glared at him as he tightened his grip on her and gave her a tiny tap on her mound.

“What do you think you’re doing?”

“Stopping you before I get really angry. Good God, woman, think more of yourself and me.” Theo let his inclination take over and tapped her cunt again, just as he had to cut her off mid-sentence. Not hard but enough to sting. “Of course, I want to make love to you. Make love, note, not have sex. But that is one small part of what I would like. What I desire. Of who I am. Now for the love of God, will you sit still and listen? Let me explain?”

The waves of nervous energy she emitted hit him hard. He hastened to reassure her. “Eleanor, it is nothing bad, I promise. I just wish to try to describe how joyous it can be for a Dominant and submissive to share their likes. To discuss what they prefer, what they enjoy, and how to achieve it. Then if it appeals, perhaps play a little? Nothing too hard or difficult. Just enough to, I hope, make you intrigued and want more.”

“Hmm.” She tilted her head back to stare at his face.

This close, he could see tiny flecks of gold in her eyes. “Hmm?”

“What would you suggest, my lord?”

Theo took a deep breath. He wanted to garner her interest, gain her trust and consent. However, he was certain it must be achieved in a way that would, if she enjoyed his dominance and wished to learn more, ease her into his lifestyle and life.

“Every Dominant I know, and believe me there are probably more of us in the circles we both move in than you would imagine, has their favorite ideas, activities, and scenarios they enjoy. Their pleasure stems from the pleasure they can share with their submissive. Mine are bondage, spanking, scribing, and wax play. Not all at once.”

Eleanor paled. Theo waited. Did such things not appeal? Had he read the signs wrong? Lord, he hoped not. Eventually, she blinked.

“That’s not to say I wouldn’t be open to anything you wish to discover. Or rediscover? You don’t seem as surprised as you might have been if you knew nothing at all about such things.”

It was as he thought. She was not unaware.

What a great quick Romance on the Go story. Loved the quick wit and banter between Eleanor and Theo. She is disillusioned by marriage, now a widow and is not looking for entanglements. He sees her as a challenge but also sees what a lively person she is underneath. Theo believes he sees her submissive side and that calls out to his dominance. Can he get her to submit to him and find the desire she has been missing in the bedroom? I really enjoy regency stories, they were actually my first love of reading as a teen. Raven brings out all the details, the sights and the sounds even from a ballroom. Highly recommended if you love witty characters, a Dom chasing a sub which causes all the sparks aplenty and lastly, a great love story. I voluntarily reviewed an advanced copy of this book.

Take one sexy dominant, one unsure but feisty widow, and put them in the middle of the Regency era and you have the makings of a fun, quick read in this Romance on the Go. If you’re new to reading Raven McAllan, then you should know that she has a flare for language and you’ll always find yourself quickly taking the sides of her hero or heroine. In this story, we meet Theo, a dominant and bit of a rogue, and Elinor, a widow resigned to live her life bereft of desire. Put them together and we get sparks and so much more.

A quick but very sexy read!!! Theo longs to find a woman to be his submissive for life, while Eleanor wants nothing more to retire from all the activities that go on in the ton! Having been widowed, she just wants to be alone in her country home but Theo thinks she is the perfect woman for him. Can he talk her into giving them a shot together? I enjoy reading the stories that Ms. McAllan writes because you can just feel yourself being right there with the characters. Lovely story and I highly recommend this for a quick afternoon read!

This was just what I needed! Theo is all that is Dominant but way before the modern world &quot;discovered&quot; this. I&#039;m no wallflower and would have made a very poor Lady of The Ton but he would sure tempt me! Eleanor has earned her Widowhood and just wants to be left in peace, but a certain stubborn man just seems to have other ideas about her. Watching these two dance around each other, verbally I mean, was perfect. Is there any way he&#039;s got a chance of convincing her he&#039;s just what she needs? I love these stories, one of the very few historical authors I read anymore!

Take one sexy dominant, one unsure but feisty widow, and put them in the middle of the Regency era and you have the makings of a fun, quick read in this Romance on the Go. If you’re new to reading Raven McAllan, then you should know that she has a flare for language and you’ll always find yourself quickly taking the sides of her hero or heroine. In this story, we meet Theo, a dominant and bit of a rogue, and Elinor, a widow resigned to live her life bereft of desire. Put them together and we get sparks and so much more.