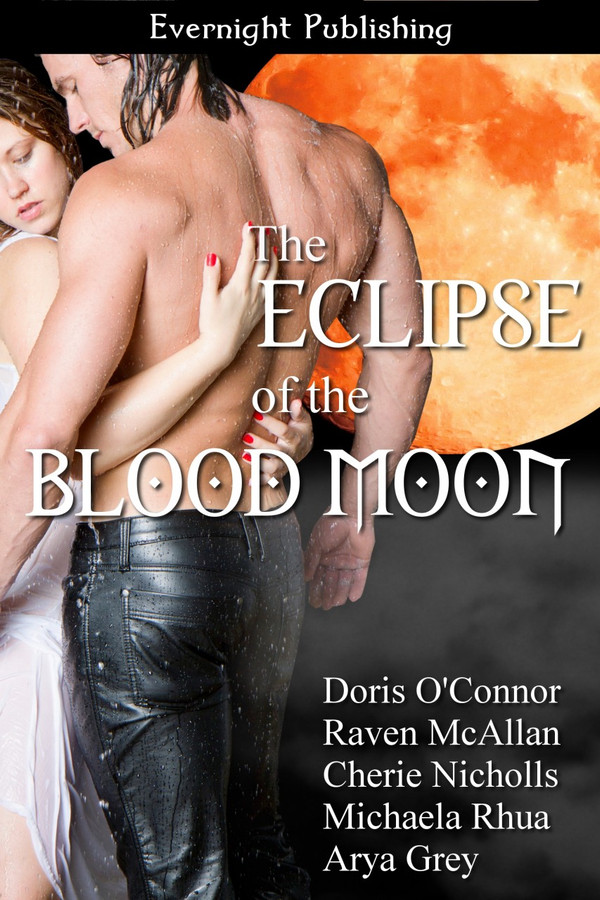 When the blood moon coincides with Halloween, the forces of darkness unite to wreak their evil spells. Will this All Hallows Eve bring joy or sorrow? Curses abound and destiny calls, as a vampire watches over his human. Devils atone to the moon, and shifters hunt their mate on land protected by a powerful white witch. An angel takes human shape to protect the gypsy girl he loves, and a black widow hunts her prey in human form.

In these five chilling and sexy tales, is love enough to break the cycle? Or is all lost under the orange glow of the menacing sphere in the sky?

Atone for the Moon by Raven McAllan

The Black Widow by Arya Grey

This was a great and suspenseful box set as each is set around the Blood Moon. In Destined Lovers by Doris O&#039;Connor we have Drake and Suzanna who was being kept apart by her spiteful sister Ayala. Until All Hallows&#039; Eve when Drake realized that true love will set them free. In Atone for the Moon by Raven McAllan there&#039;s Lucy and Nick. Lucy has no memory of Nick while he must get her to forgiven him for things left in the past. In Property Lines by Cherie NichoIls we meet Adam and Celeste. Celeste is a witch who seems to constantly clash with Adam while he does what he can to irritate her like crossing her property line. In Gypsy Butterfly by Michaela Rhua we have Nali and Michael. Nali was born on a blood moon night and had been cursed to die on said night also. Michael is a angel who has fallen in love with her and wishes to protect her. Last and definitely not least is The Black Widow by Arya Grey where we meet Chelle and Harry. Chelle was cursed by a witch to be a black widow who sleeps with and then kills her lovers. Never knowing why Chelle left Harry searches the world looking for her. These stories are gripping from the first page to the last. They have sizzling chemistry, dynamite characters and wonderful plots that just puts you in the mood for Halloween.

Destined Lovers Suzanne is haunted by a nightmare, which feels all too real. Even stranger is that the man of her dreams resembles her new neighbor. Drake knows destiny will have its way. An inevitable meeting of his eternal love, an undeniable curse and a witch will have him at all costs. Fate will declare the winner. Destiny is inescapable. This time, Drake is determined he and Suzanne will break free. Shocked at the witch’s identity, Suzanne understands choices will decide the confrontation ahead. Destined Lovers is a tangled web of past and present. Readers need to remain on their toes to keep up and embrace destiny. Atone for the Moon Lucy is hearing voices. Worse, she is responding to them. When strange events begin to occur, she is sure she is losing her mind. Nick has made a mistake once, and both he and Lucy have paid the price. Little does he know there is a different plan. Lucy must accept her true nature. Nick must show he has learned to follow rules. Only by passing the test will they gain more than they could imagine. Atone for the Moon is an interesting twist to a sexy love story. Ms. McCallen tells love stories full of spice and with the devil himself. Property Lines Celeste loves protecting her pack and her territory, if only the alpha&#039;s son would leave her alone. After the mate hunt, she will never have to worry again. Adam is unable to leave the little witch alone. She has messed with him and his wolf, and now he is going to show her who is alpha. Celeste and Adam are sure their one night of passion is enough, but the pull of the mating moon just may be their downfall. Adam will accept fate, or his wolf will do it for him. Celeste must decide if she will accept the alpha’s arrogant son. Though the ending of Property Lines is rather abrupt, I absolutely love Celeste and Adam. I have smiled all the way through it because every page is full of love. Gypsy Butterfly Nali is finally settled. The gypsy life she has once led is over, and she is happy with the land she cares for. Her little enterprise, Mr. Bowman and nature are all she needs until the stranger arrives. Michael has no wish to scare Nali, but a storm is coming and she is unaware. All the years of waiting have come to an end, so he approaches her as a tenant. In reality, he is there as a protector. It is said that Nali, a child born during the blood moon, is cursed to die during the blood moon. Because of the curse, she has always been shunned, but Michael seems to be determined to be there for her when no one else ever has. If the beginning of Gypsy Butterfly is a mass of confusion, soon the story begins to take shape and readers find Nali and Michael enthralling. The storms are coming, and readers feel as tossed by them as the characters. The Black Widow Cursed to live as a black widow for more than a century, Ariadne has killed every man she has been with. The man she has once loved is long dead, but this year is her chance to break the curse and finally move on. Harry has spent his immortal life searching for the women he loves. He has her to thank for being Vampyr, but has no regrets and only wishes to find his beloved. A chance meeting provides the last opportunity to break the curse. There is another bound by the same curse–the sacrifice of the first born. A curse long denied will finally end, and it is possible no one will remain alive. The Black Widow is a heart wrenching story of undeniable love and the bitter acid of jealousy. The ending is the least expected one, but will offer a view of true love and sacrifice. Ms. Grey provides an intriguing story of love and loss during the blood moon. The Eclipse of the Blood Moon offers an outstanding mixture of stories that portray the blood moon either as a curse or as a blessing. Each story is an adventure for the readers’ soul. The book is a beautifully erotic mix of characters with love lost and found in everyone. I highly recommend this rare anthology of stories by talented authors determined to entertain emotionally.

The Eclipse of the Blood Moon is an anthology with five different paranormal stories. Destined Lovers by Doris O’Connor was a nice story with characters that I quickly came to like, for as just as Suzzanna felt entirely human, Drake had that otherworldly characteristic that made him exquisite. However, I found the ending of this short to be a bit confusing. Atone for the Moon by Raven McAllan had some spanking but it was not sizzling hot in the sex department. It was definitely a fun story that had me laughing at some points but I believe it could have been much more enjoyable had it been longer. Property Lines by Cherie Nicholls was my favorite of the five stories in The Eclipse of the Blood Moon anthology. The chemistry between Adam and Celeste is present from beginning to end making it impossible to drop the story. Ms. Nicholls write a short, very hot story that feels complete (even if I would have loved to learn more about the characters). Gypsy Butterfly by Michaela Rhua was different. Though the interaction between the characters felt a bit forced, the plot idea was interesting and different. The Black Widow by Arya Grey was not your usual vamp story. With a very original idea and very vivid descriptions, I really would have liked to read more on this one, especially since the ending felt a bit rushed to my taste. The Eclipse of the Blood Moon was, in conclusion, a good and entertaining read with stories suited for all those that like things that go bump in the night.

A five book anthology, The Eclipse of the Blood Moon starts off strong with Destined Lovers by Doris O’Connor. Suz and Drake were in love, but a jealous witch cast a terrible spell on them, causing hundreds of years to pass with longing and nightmares the only thing to look forward to. Now that the next blood moon falls on Halloween, the curse can finally be lifted…or they can finally lose each other forever. Atone for the Moon by Raven McAllan is about a devil Dom who refuses to listen to the Sept’s mandate regarding Lucy’s treatment. He wants her, and he coerces her into allowing him to have his wicked way with her…every way he has dreamed of. The story was a bit confusing for a while, and I’m not sure I completely understand what the characters are supposed to be, but overall it was an entertaining read. Property Lines by Cherie Nicholls is a sweet, romantic story about meddling parents making a really good choice for their son. It is funny, with charming characters, a quaint setting, yummy sex scenes and a happily ever after. And I love it when an alpha bachelor gets hooked. Gypsy Butterfly by Michaela Rhua is mysterious and heartwarming, scary and sad, but overall it is sexy and romantic. Nali and Michael have been together for years, but as her guardian angel, Michael was never able to reveal himself…until just before the night that Nali was destined to die. He absolutely could not live through eternity without her, so he did the only thing he could to save her life… The Black Widow by Arya Grey is an intense, frightening story about love denied for over a hundred years. As is most often the case, love will find a way…even if the lovers in question are a murdering black widow and a blood-sucking vampire. Through one tiny twist of fate, a life is changed and love now has a chance. Overall, The Eclipse of The Blood Moon is a highly entertaining read with plenty of Halloween tricks and treats, not to mention frights aplenty.