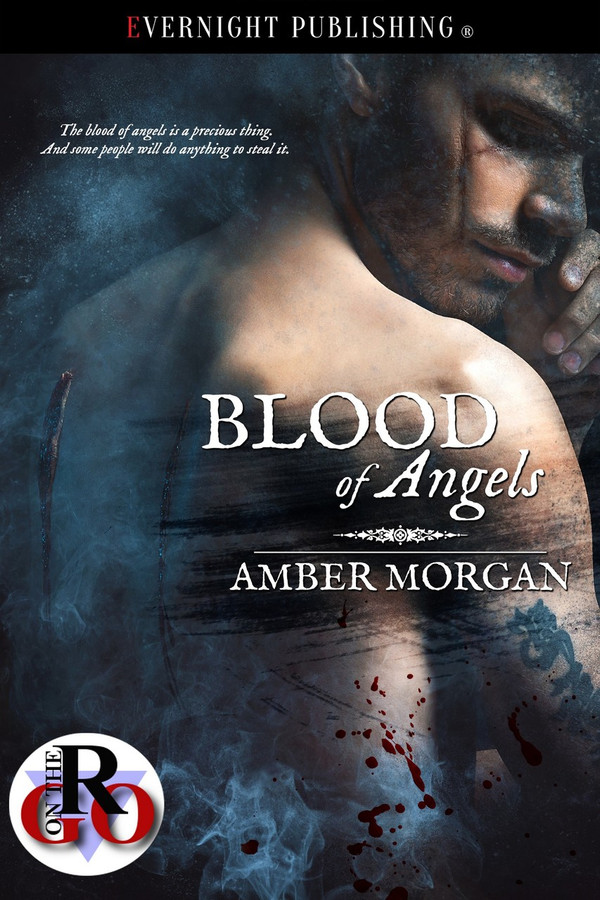 Thea Clayton knows her life isn’t normal. But even she wasn’t prepared for an angel to fall through her roof.

Turiel gave up his place in Heaven to experience true sensations for the first time in his immortal life. He didn’t realize that meant pain as well as pleasure.

Thea isn’t the only person who knows Turiel has fallen. The blood of angels is a precious thing. And some people will do anything to steal it.

At the top of the stairs, she realized the fireball had hit her bedroom, and she started shivering again. If she hadn’t moved bedrooms … if she hadn’t sleep-walked… The bedroom door was blackened and hot to the touch when she cautiously pushed it open. Over her head, rain poured in through a smoking, steaming hole in the roof. The room was half-flooded, half-barbecued. She walked through sludgy ash as if sleep-walking again, barely aware of the wreckage around her.

All her focus, all her being, was concentrated on the creature writhing in agony amidst the wreckage. He was naked and man-shaped, but she knew, oh she knew he wasn’t a man. He was on his knees, his back to her and his face hidden. His skin was dusty gold, his long hair black as pitch. That wasn’t what marked him as inhuman, though. It was the wounds on his back: livid, fresh, and as bloody as a slaughter house. Dark rivers of blood poured down his golden skin from the two feathered stumps at his shoulder blades. She’d never seen so much blood. It was stomach-turning and magnetic at the same time. There were feathers scattered everywhere, sodden and blackened, but undeniable.

And his cries … they broke her heart. They made her desperate. She could fall to her knees in the rain and the ash and promise him anything, anything, if he would just stop crying.

Her granddaddy used to thunder around the house quoting from his Bible, which he always carried with him. He’d terrified and entranced her when she was a child, with his booming voice and wild beard. His words, no matter how loving or beautiful the quote may be, always sounded portentous, turning every verse into a doom-riddled prophecy. She'd listened, wide-eyed and enraptured, while her parents rolled their eyes and called him a silly old fool. And now, like the ghost he was, her granddaddy rose in her memory, deep voice roaring.

How you have fallen from heaven, O morning star, son of the dawn! You have been cast down to the earth, you who once laid low the nations!

Pulled by the creature's cries, she rushed to him and dropped to her knees, hands fluttering over him. She was afraid to touch him, but how could she not touch him? An angel had fallen through her roof, destroyed her bed, and lay weeping at her feet. How could she resist?

His skin was hot, deliciously so, and he went still under her hands, like a frightened animal. She swept her fingers up his spine, through the tracks of blood, and whispered, “Please. Please, tell me how to help.”

His words were nonsense at first. Beautiful nonsense, in a language she couldn’t guess at. But his pain was clear, and so was the pleading. What would she do with an injured animal?

She talked back to him, soothing, gentle nonsense of her own, and she eased him upright. His only wounds seemed to be the gushing stumps, from which blood flowed faster than the rain could wash it away. Sticky, matted clumps of downy feathers clung to the wounds and she realized she would have to touch them, pull them away to clean the wounds. The idea made her head spin, but she kept up her stream of chatter and got him to his feet.

He didn’t resist. Perhaps he was in shock? He was heavy in her arms, and his passivity made it hard to guide him through the ruined bedroom, but she managed. His head bowed, his face hidden, he let her drag him along. She got him into the bathroom and sat him down on the edge of the tub. It was a claw-footed, cast-iron monstrosity that belonged in another century, but her father had installed a very modern shower over it. That seemed the most practical way to wash off the blood. If the angel would let her.

“Can you understand me?” she asked him.

He lifted his head and her heart stopped.

His eyes were inhuman, a fiery amber with pupils like a cat or a serpent, not a man. Tears streaked down his savagely beautiful face, stirring a primal rush of desire and compassion in her. She turned her head, unable to meet his gaze. Humans were never meant to look upon angels.

A lonely woman, a bad storm and a fallen angel – all these things go to make a good story. Folks in Milton thought Thea slightly strange. She lived all alone in her family’s house and a nasty storm sends her outside in time to watch a bolt of lightning crash through the roof of her bedroom. I thought this an intriguing way for Turiel, the wingless angel to arrive. This also seems to give Thea a purpose in life. An interesting story of angels, a lonely woman and how their meeting changes life for both of them. I particularly liked the part where Thea has to fight for Turiel against those who would use him for profit. An unusual story with emotional impact. I had no problem in wanting to read to the end.