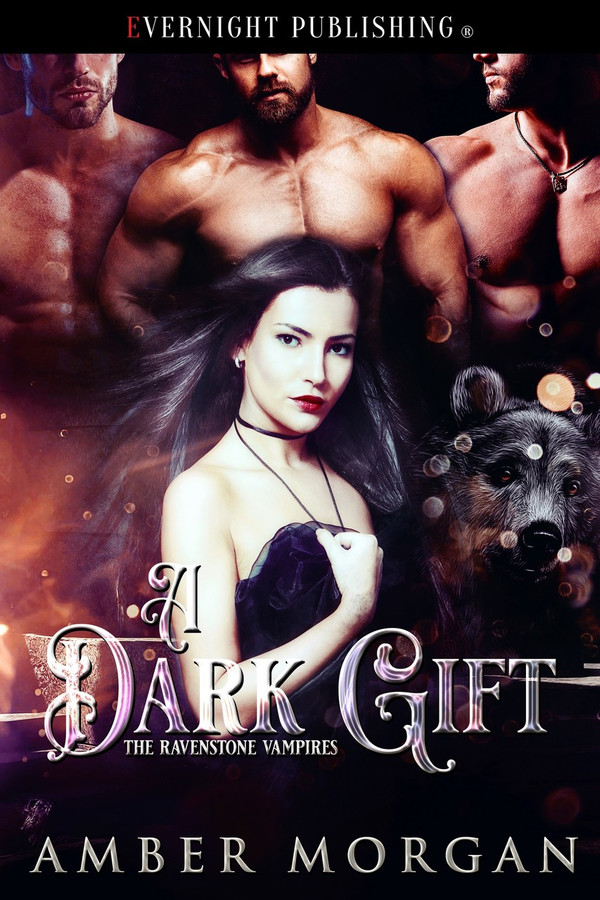 Evie Bourne’s life plan is pretty simple—finish her degree and get a good job. She never counted on vampires.

But after a vicious attack leaves her with a whole new set of undead problems, she’s forced to lean on some unusual allies to guide her. Kaito, her enigmatic bodyguard. Carson, a shapeshifter king. And Adrian Mercer … Well, Adrian is complicated. But there’s no time for Evie to sort out her feelings. A group of fanatical vampire hunters is closing in. Everyone is under threat, and nobody can be trusted.

Now, Evie is dealing with her tangled emotions and a whole new, dark world of blood, danger, and lust. And the hardest part of it all is her mysterious sire, the vampire Rahab. Because someone wants them to think Rahab is a traitor to them all … And Evie just can’t rule it out.

He nodded, although he didn’t look convinced. “Come on. We should raise the alarm.”

“The blood is fresh,” he repeated. “And Divina Lux have not been shy about attacking the manor.”

My stomach churned. I looked back to the dim lights of Faulkner Park. Suddenly the house seemed very far away, with a chasm of shadows between us and there.

“That’s not reassuring,” I snapped.

He laughed, low and bleak, and caught my hand, spinning me around to face him. We were so close, so achingly, unnervingly close, that I just froze. “Do you know why I bit you, Evanna?” he asked me.

I shook my head, not sure I wanted to know. Did it matter? He couldn’t undo it and he couldn’t justify it.

“Because I couldn’t help myself,” he said, so quietly I almost didn’t hear it. “Your blood’s perfume was plums and spice, and I’m weak, sweetheart. Very weak and very selfish. You were too good to resist.”

“Why are you telling me this?” I asked, trapped by his hands and his voice, trembling with fear.

“Because you need to know, when I do what I’m about to do, that it’s not your fault. It’s mine. Because I’m still very weak and you are still very delicious.”

And then he kissed me.

Fire coursed through me, born of outrage and something far more primal. I had a few endless seconds to feel shaken and electrified, to feel every tiny last detail of the moment. The rain sluicing down on us, heavier now. The fading scent of Hugo’s blood. The touch of Adrian’s lips on mine, the intensity with which he kissed me, as if he was stealing something, as if he knew he’d never get to do it again.

And then, before I had a chance to shove him away, he broke off the kiss and stepped back, leaving me reeling.

“What was that about?” I hissed.

“Not scared now, are you?” He gave me a crooked smile and took my hand. Before I could protest, he was dragging me back toward Faulkner Park.

Undeath is what happens when you&#039;re busy making other plans. Instead of finishing her degree, Evie is thrown into the world of intrigues and has to decide who are her friends and enemies, which sometimes isn&#039;t that obvious, especially when you are a young vampire.

Spoilers.... The thing I like about this book is the story is pretty different from other vampire books. I didn&#039;t expect the sudden turn of events and I felt like this book was very action-filled. I thought it was cool that Evie almost in a way has 2 makers because Adrian drained her but Rahab turned her. I don&#039;t like her relationship with Carson I feel no chemistry between then whatsoever other than sex. I was confused on all her &quot;feelings.&quot; She said that she feels safe and secure as if the world couldnt harm her with EVERY one of the male characters: Carson, Kaito and Rahab. I wish she would just figure her feelings and only focus on one! I feel that it makes it less romantic. I wish the author spent more time on her and Adrian. In every scene it seems like they&#039;re just passing one another by. I really hope their relationship grows and they spend more time together. Now with the character Rahab it&#039;s frustrating that he keeps eluding her! And there&#039;s so many unanswered questions but he does have that mysterious pull that makes you want to stick it out to find out more about him. With so many relationships (Carson, Adrian, Kaito, Rahab) I hope the next books dive deeper into focusing on her REAL love interest. One of the compelling things about this story is how the author explains Evie&#039;s pull/bond toward Rahab and Adrian, it&#039;s very beautiful and romantic to read. I enjoyed reading that. Will have to wait for the next books. Crossing fingers it doesn&#039;t disappoint!

This story was intriguing from the beginning. I really want to know what happens next and what Evie’s maker is hiding?? (And not just behind the hood)....

The cover to this book caught my eye first i patiently waited for it to release. And was pleasantly surprised it’s nice when old things get new kinda spin vampire sire relationship was interesting in this book.. the shifter name and relationships were different as well i really enjoy this book and am really looking forward to the next one

The story is well written, with a captivating plot and very good character development. I wanted to keep reading and I look forward to seeing how the story continues in the future.

I can&#039;t even remember how I stumbled across this book, but I&#039;m glad I did. I&#039;m always looking for well-written RH, and this is certainly that. I was absorbed in Evie&#039;s story from the first page. It&#039;s gratifying to read a FMC whose reactions are all believable. Evie is understandably afraid after her attack, but she overcomes her fear to face her new life head-on. The love interests were each compelling in their own ways, and I can&#039;t wait to see more development there. The development so far on that front managed to feel believable, too, which isn&#039;t always the case with RH. Looking forward to the next book