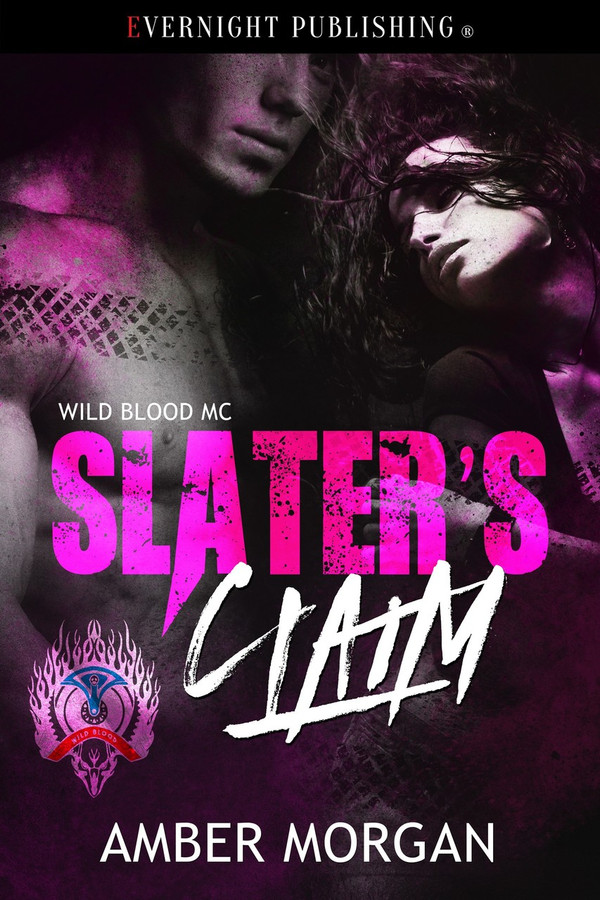 She won't be tied down.

Freya can't afford commitment. She's deep in debt to a dangerous man and she refuses to drag anyone else into her mess. But Nathan Slater is forcing his way into her life and her problems—and Freya has to admit, she kinda likes it.

He won't be told no.

Slater is used to being in control. Freya Markham is testing his limits. But Freya's problems could destroy her, and Slater just can't let that happen. He's going to fix things, whether she likes it or not.

She sashayed onto the stage like she owned it, long legs perfectly displayed in a pair of ragged denim shorts. Even without the skyscraper heels she wore, it was clear she was tall. Slater was six foot four. He liked tall women. Her glossy hair was dyed a dark, vibrant shade of magenta that glowed under the pink stage lights. She wore a simple navy tank top with a vintage-looking garage logo on it. The top clung lovingly to her generous breasts, the way good clothing should cling to a good woman. Slater licked his lips unconsciously, already imagining dragging his tongue over that creamy skin.

The woman winked coquettishly at him, spurring an instant, irrational jealousy in Slater. She grabbed hold of the pole and began dancing.

Unlike Glass’s girl, she had rhythm, her hips shimmying effortlessly to the beat of the trashy music. She didn’t have much skill with the pole, but she had an easy sensuality that caught the eye anyway. Frankly, Slater would have paid to watch her sit there and file her nails, as long as she did it in those shorts and heels. She twirled herself around with careless grace, like she was dancing for herself and not the men watching. Slater liked that.

Benedict watched her, transfixed, chin resting in his hands and a goofy grin on his face. Slater did not like that, but he stomped on the feeling. It perturbed him. It was one thing to admire a woman, but this surge of ownership was something else, something that would get in the way of him doing his job here. He bit his lip and tried to watch her dance the same way he’d watch one of the club girls dance, with a detached appreciation.

His stiff cock told him he was failing.

By the time her song came to an end, he was shifting uncomfortably on his seat, the sound of squeaking leather drawing him the occasional sly smile from Punk. He gritted his teeth and refused to meet his friend’s eye.

The woman struck a pose as she finished, hands on hips, head tossed back, and she looked expectantly at Benedict.

Benedict gave her a round of applause. “Not bad, baby, not bad. Need a little work on the whole, you know, pole stuff.” He made a vague gesture with his hand that could have meant anything. “But one of the more experienced girls can help you with that. How’d you hear about the job?”

Slater didn’t think he imagined the slight hesitation in her answer.

“Sammy suggested it,” she said.

The name meant nothing to Slater, but Benedict’s eyes lit up. “Ah. Ah, okay. Ah. Nice. Okay, you got the job, then. What’s your name, sugar?”

“Freya,” she said with a spark of annoyance. “Not baby, or honey, or sugar.”

Freya and Slater are a bit different than what I usually read. For example, though Slater has a fully fledged successful career, but he is also a prospect. For readers who have not read an MC book before, prospects are basically assistants or interns of the MC world. That in itself is not the usual part. Freya’s father is a neurologist and she had wanted to do the same thing. These folks were successful in their own right, so seeing them as part of the MC was different. However, their relationship smolders. It is there in the background but it is not the main theme or topic. Unlike some erotic books I have read I liked reading this a lot more because it was not constant sex. I could see the relationship build in the small things he does and doesn’t do. The thing I disliked was that it took a lot longer than I thought to get through the first half of the book as it dragged a bit. That being said the ending was well worth the time it took. This is a part of a series which could be read as a stand-alone. I recommend this to any reader who wants a bit of the erotic but does not want it to overpower the story.