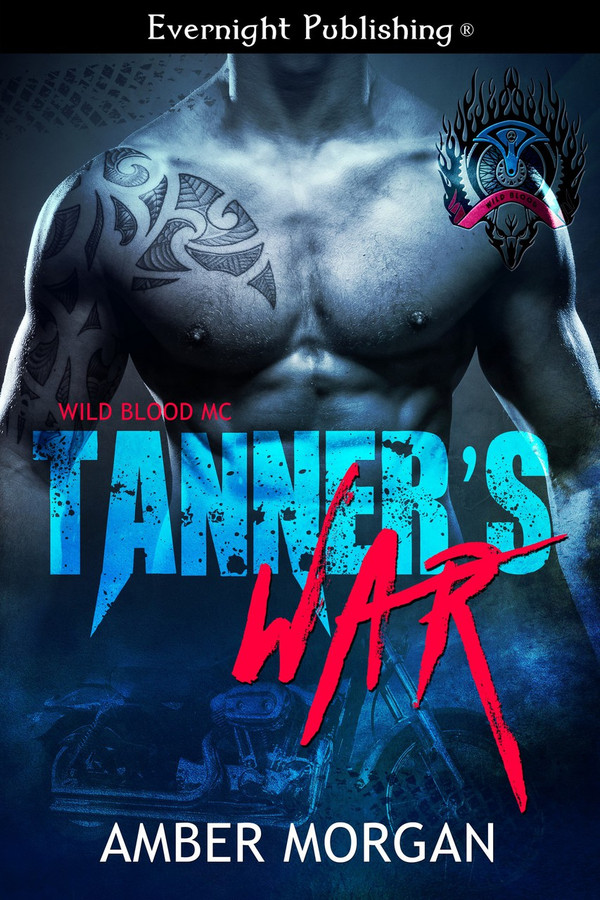 He's not looking for trouble...

Tanner is fresh out of prison and trying to stay clean. His place in Wild Blood MC demands it. But when he nearly runs over a terrified woman, trouble finds him. Beth needs a savior and Tanner can't say no.

Beth chose running over a forced marriage. She's got nothing and nobody—until she meets Tanner. But with a fanatical cult leader hunting her, can she risk staying with the first man to defend her?

Tanner's willing to put it all on the line for Beth—even his beloved MC. The fallout will change both their lives.

He shifted uncomfortably in his seat, and she found she liked that he was nervous too. It made her feel less inexperienced and naive. “Me kissing you. I shouldn’t have—but not because I didn’t want to. Don’t think that.” He caught her hand suddenly, squeezing hard as if he could impress his words on her skin. “I did want to. I … fuck, I wanted to do a lot more than just kiss you, Beth. But you can’t … It would have been so fucking sleazy of me, taking advantage of you like that.”

“Is it taking advantage if I want it too?”

He scowled, but didn’t release her hand. “Yeah, if you’re a drunk virgin out in the world alone for the first time ever. I’m not Prince Charming, Beth. I’m the black knight.” He did let go of her now, cracking his knuckles.

“Aren’t you being a little melodramatic?” she asked, resting her hand on his knee. “I wasn’t expecting a gold ring and a white dress last night, Tanner. I know I can’t stay in town. Abram will come after me and Nash doesn’t want me to anyway. And I’m a virgin, but I’m not an idiot. I don’t see my virginity as some mythical treasure to guard, or something cheap to throw away. If me being a virgin is a problem here, it’s your problem, not mine.”

He looked startled, then annoyed. “It’s not a problem. I just …” He shrugged and covered her hand with his. “I don’t want to be something you regret.”

Her heart raced. “That sounds like something Prince Charming would say.”

He closed his eyes and groaned low and long, like a wild animal. “You’re trouble. I knew you would be.”

Before she could answer, he seized her, almost dragging her into his arms and kissing her with a possessiveness that shook her to the core. He raked one hand through her hair, hooked his free arm round her waist and pulled her hard against him. His tongue plundered her mouth, exploring hungrily while he pushed his hand up her shirt to sink his fingers into her skin. Beth clung to his T-shirt, soaking up every touch, every movement of his mouth and fingers. Searing heat filled her body, and everywhere he touched her she felt deliciously tender and delightfully trapped.

She wanted more but she didn’t know how to ask for it, so she wrapped her arms round his neck and thrust her breasts against him, hoping he’d just know what she needed and how badly she needed it. She was senseless, nothing left but need. When he broke away from her to kiss and suck at her throat, she gasped. “Touch me.”

This is the first book that I have read by this author and I really love MC romances, I&#039;m, such a huge fan so I know all the slang and whatnots of the world. But although this book was an ok read I just couldn&#039;t quite click with it. Tanner was great but I felt this book was like a rollercoaster up and down up and down.

I&#039;m not normally a fan of MC romance, but this one caught my eye and I&#039;m so glad I picked it up. Yes, it’s a fast paced read, I read this in one sitting, but this didn&#039;t make it any less enjoyable. There were was just enough character development to keep me invested in the characters, and beyond curious about some of the other brothers in this MC club. I will pick up the rest of the series, for sure. Tanner was a great hero. Alpha without being an asshole, and just about ready to do anything for his woman. *sighs* I also made a refreshing change to have an MC club, where the men actually seemed like decent guys under all there tough personas. A great read, and start to this series.

After spending time in jail, Tanner is focused on staying out of trouble as a member of the Wild Blood Motorcycle Club. In TANNER&#039;S WAR, author Amber Morgan throws some challenges in Tanner&#039;s path in the form of a young woman desperately in need of help. Beth is running away from the Church of the Serpentine Cross where she has been selected as the next bride. A chance meeting throws the couple together, immediately causing sparks to fly. While the story contains the basic MC ingredients, the addition of a cult provides an interesting perspective. As the first installment of the Wild Blood MC Series, the story effectively creates a foundation for more development. There are several characters that would be ideal for future installments. While it is a quick read, the author has packed plenty of action into the storyline. From snake handling to old fashioned bumping and grinding, readers will enjoy spending time with Tanner and Beth. - See more at: http://erotic.theromancereviews.com/viewbooksreview.php?bookid=19685#sthash.ywIercBy.dpuf

Enjoying the freedom that could only truly come on the back of his motorcycle, Tanner almost literally ran into Beth on a dark road one windy, rainy night. On the run from the only so called home she had known, a cult run by a domineering religious fanatic trying to make her his next child bride. Tanner felt immediately drawn to Beth in every way possible - protectively, physically and downright sexually. Just six months out of prison and trying to keep his nose clean, his MC president is none too thrilled to have Tanner dragging a &#039;problem child&#039; into the Club but Tanner cannot leave her. Tempers flare, passions rise but how will it all play out? I was in love with Tanner faster than you can say spit. His way with Beth and being the crusty marshmallow from h*ll that he was I found completely endearing. The fact that he made it totally clear that he would protect her with all that he had and was before he even really knew anything about her gave me a huge insight into his make-up. I was pleasantly surprised by how the MC in general responded to the dirt bags who kept coming after Beth. Amber reminded me that once again, you really can&#039;t judge a book by it&#039;s cover. As for Beth, I was afraid, quite frankly, that she would be a wuss. I mean she had every reason to be, right? But she wasn&#039;t. And she and Tanner were so good together. Their sexual chemistry was off the charts hot. Their first kiss about sent me through the roof and when Tanner offers to take care of her needs right there on the step, before God and everything, well, let&#039;s just say it was cold shower time by the time he was through. And as for what happened with the bad guys, Ha! I&#039;m not gonna tell you what happens in the end, silly! This is a rough and gritty book and naturally the author crafted the language and actions to match. The sex is fabulously erotic and none of the above is appropriate for those under 18. Lovers of hard riding, hard talking soft hearted heroes and good for the hero heroines will gobble down Tanner&#039;s War in no time flat! I received this book in exchange for my honest and unbiased review. All opinions are my own and no further compensation was received.

Read this in one sitting, and this is a new author to me. I really enjoyed this biker romance. Well written with just a few minor editing issues, hot cover! There were a couple similarities from another book that I&#039;ve read, the whole innocent girl running from the cult, being forced to marry the elder concept, but not enough to ruin the plot. Some of the characters introduced were interesting but not enough about them so I&#039;m hoping there will be future books for them. Mia definitely needs her own story! There was plenty of biker drama, not a lot of sex between Tanner and Beth but what little there is was hot! The overall plot was interesting. I would read the next installment of this story if there is one.