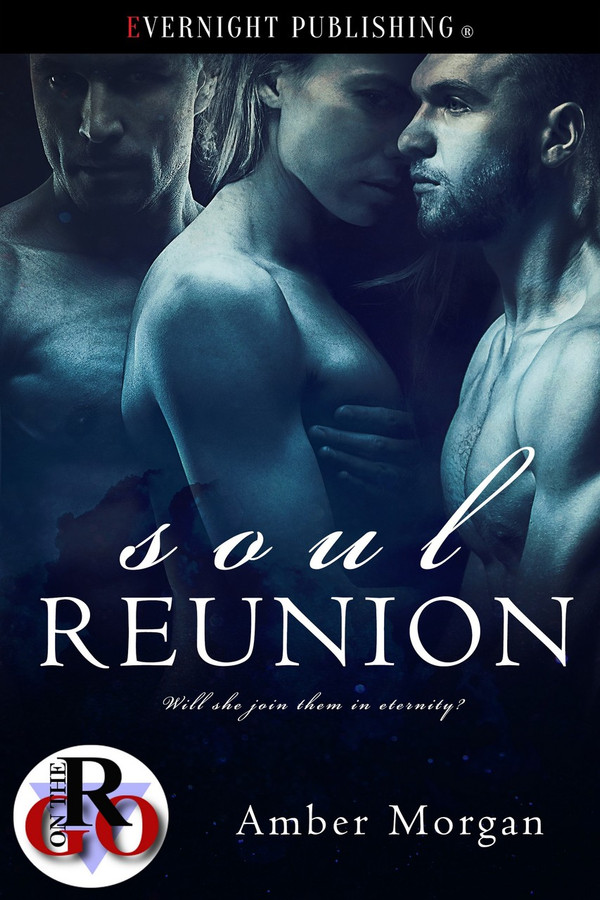 Will and Thomas lost their beloved Anne over four hundred years ago. Now the vampire lovers have a chance to bring her back, by calling her soul home to the world of the living.

Ruby has never known lust like the kind Will and Thomas make her feel, but do they really want her, or just the woman she used to be?Will she join them in eternity? On Halloween night, Ruby must choose between the life she knows and immortal love.

“Oh my God,” Ruby said, suddenly feeling faint. She was delusional, definitely. That was the only explanation she could find for two hot men making out in her kitchen. She’d hit her head too hard and this was a coma-fantasy.

At the sound of her voice, they broke apart and turned to her. She gasped at the sight of the blood smeared on both men’s lips. Thomas looked horrified. The other man looked fierce, as if he might leap on her and devour her. They were a study in contrasts: Thomas fine and fair, his companion dark and rugged. And they were both so achingly familiar. Watching them kiss, she’d felt a sense of recognition so strong it was almost overwhelming. Not to mention potently arousing. If the dark-haired one kept staring at her like that, she’d throw herself at his feet and beg to be taken.

“Who are you?” she asked, leaning against the doorframe for support. Her nipples were tender and alert beneath her gown, her pussy warm and wet, and she had a horrible feeling they both knew somehow. “What do you want with me?”

“Ruby,” Thomas said, wiping his mouth. “This is my companion, Will Farmer. We...” He trailed off, looking to Will for guidance. “How to explain simply?” he asked.

“There is no simple explanation,” Will said. “And I am in no mood for a long explanation.” He strode to Ruby. She gasped when he caught hold of her, pulling her in hard against his chest. He was a huge man, hard as granite—particularly below the belt, she realized with a jolt of raw lust. She felt both safe and wild in his rough embrace.

“Will,” Thomas said. Just one word, but a world of warning in it.

“I will be careful with her,” Will said. “But I can’t wait any longer, Thomas. I've always been the patient one, and I reached my limits a long time ago.”

And before Ruby could protest, or even register what he was doing, he bit into her throat.

Ruby moaned and closed her eyes, sinking into Will’s violent passion. His sharp teeth pierced her skin easily and for a split second she thought he was killing her. But her surprised pain quickly melted into liquid bliss. She felt it pool between her thighs, scorching her body with delicious heat, and she pressed herself harder against him, her hands reaching for that thick shaft pushing at her stomach.

Will pulled back and she whimpered a protest, desperate to have him back. He slashed his fingernail along his throat, opening up a small wound that welled with dark blood. “Drink of me,” he said, “and remember who you—we—are. What we are together.”

Hot times two. Will and Thomas lost their lover years before. They’ve been looking for a replacement, but can you really replace your love? Move on? Evolve? These two men have to figure that out. I liked the three characters in this book. Will and Thomas are almost one entity because they are always together. I liked how they balanced each other out. I also liked their brooding vampireness. I’d love to see these two in real life. Ruby is an interesting character, but I would’ve liked to have been able to visualize her more. I got the vulnerability Thomas and Will saw in her, but I wanted to see her better. Still, the sex is hot and this is a great short story for a lunch break reading session. Don’t miss this short story.

​Four Hundred Years Hard... How long can you make love last? How long can you wait for it to return, and what would you do to get it back? Will Farmer and Thomas Langley have one last chance to bring their lost lover back to them, but will she be the same as they remember? When Ruby Matthews is faced with a terrifying but seductively irresistible proposition, will she choose to leave the world of the living in exchange for an un-dead life of endless love? Will and Thomas are vampires, and lovers. Four hundred years ago they were a threesome along with the lovely Anne Baker, until Anne was brutally murdered before they could turn her, and was lost to them for centuries. When a Witch&#039;s spell offers the hope of recovering Anne, Will and Thomas gladly accept the risks. But modern-day Ruby Matthews has no idea that her tortuous October nightmares are the precursor to a long-awaited soul reunion with not only her vampire lovers, but a woman long dead. This short story is a fast-paced read that delivers exactly what the title suggests, a loving reunion that gets right down to business and packs a red-hot sensual punch. With guy-on-guy as well as some threesome action, the sexy scenes are both macabre and exciting; as you&#039;d expect whenever fangs are involved. Even so, Will and Thomas&#039;s gentle nature make the seduction of Ruby sweet, satisfying and utterly complete. The only disappointment is that the old theme of the multi-century wait for that &quot;perfect mate&quot; is getting a little tiresome for this reader. But if you like predictable vampire love stories, this is a good, quick read to &quot;liven&quot; up a &quot;dead&quot; boring commute to work, and leave you ready to tackle the day with fresh blood!