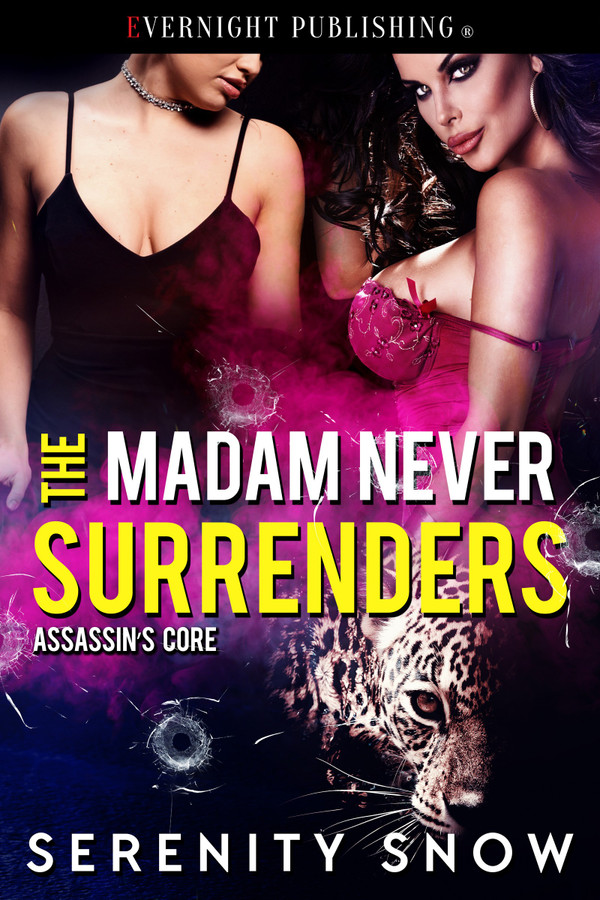 Alexi Russo thought things were going to settle down after she defeated Breakers, but Tatiana’s cryptic encounter with a dangerous organization leaves her on edge. Little does Alexi know that’s just a cover for an unseen group of dangerous men looking to destroy Mojo and kill Tatiana.

As Alexi digs deeper, No Dice is destroyed, and assassins attempt to assassinate Tia. Alexi retreats while she figures out the name of the game. When she learns the enemy wants information that Tia’s father collected, she wastes no time using it against them.

Because a madam may retreat, but she’ll never surrender.

Alexi felt eyes on her and casually glanced around to find a man watching her mate. The cat half of her, the jaguar that shared her genes, raised her head and a silent growl escaped her.

She caught Galli’s eye and the other woman nodded as she moved closer to where Tia had gone.

“I hate these things,” Ace commented and grimaced, the words bringing Alexi’s attention to her. “But Dev wants us to look normal.”

Alexi grunted. “There aren’t enough charity events on earth to gloss you over.”

“Dev’s on this kick,” Ace said. “She’s wanting us to be even more anonymous than ever. Taking cases that mean shit. I had to go to the wall with her on my last case.”

“On what?” Alexi asked throwing a glance to where Tia and Jasmia were laughing.

“A pedophile,” she said. “The client ended up vanishing on us because Dev found out and ordered me to cut it short.”

“Dev getting squeamish in her old age?” Alexi teased.

Ace screwed up her face. “She’s worried after a meeting with Willis. He’s an over ambitious twit … wants her to hand over our files and some of our operatives for prosecution in exchange for our freedom.”

“You told the asshole no, right?”

Ace and Devin had done some work for the FBI in the past, bringing down organizations the feds couldn’t touch without sparking a wildfire of anger from the public.

“Exactly, so he’s that much more determined to close us down.”

“Better watch your ass then,” Alexi warned in a low tone.

“We’re doing our best, but fact is we’re going to have to have it out with them once and for all.”

Alexi grunted and was about to speak when a hand landed on her shoulder, and she turned ready to take the owner to task.

“Can’t we do this another time?” Alexi asked crisply.

Alexi was loath to leave Tia, but she did have Galli with her, and Ace would be looking out for her, so she followed the judge as he walked out of the ballroom.

“What is it?” Alexi asked after they were in the corridor.

The judge glanced around, and Alexi patiently waited for him to get on with it.

“I know you said you couldn’t help me, but Russo, the blackmailer is connected to a group called Nine. They’re powerfully connected men. Businessmen, politicians, lawyers.”

She gave him a blank look unaware of who the group was.

“I got this.” He thrust his hand in his pocket and removed an envelope. “I only ask that you move my family out of harm’s way. I’m not pissing this case off. I’ve been down that road before and it was the wrong thing then as much as it is now.”

She frowned and looked at the note. Footsteps clinking on the shining floor drew her head up. Tatiana and Galli were coming toward them.

Alexi shook her head subtly, and Galli stopped Tia. She opened the envelope and removed the sheet to find a crest at the top of the stationary.

Continue at your own peril. Your own daughter will become a plaything for a man who finds her quite attractive. If you don’t do as you’re asked, she’ll vanish and the next time you see her will be in a video learning to please her new master.”

“I’m not sure, but I’m guessing it’s the grand master.”

“Nine, they call the head of the organization the Grand Master.”

“I’ll take care of it,” she promised. “Tonight. Go home, and I’ll send someone to get your family.”

“Thank you,” he said. “I know I can’t hide from this forever, but my family shouldn’t have to suffer.”

“I don’t know anything about Nine, but I’ve given law enforcement a copy of that, and I’ve asked a cop who’s testified in my court to make some discreet inquiries. I won’t let these people bully me into allowing another plague to go free.”

There was fear in the judge’s face, but determination also shone in his eyes.

“I’ll do whatever it takes to protect my family, including owe you whatever you ask.”

“We’ll discuss that later,” Alexi said. “I’ll have my guy send you a bodyguard if you like.”

Alexi gave him a curt nod and he turned. “Judge, your—”

“I’ll get it later,” he said and kept going, so Alexi stuck the note back into the envelope and pocketed it as Tatiana and Galli joined her.

“What was that?” Tatiana asked.

“A judge who plays at Blindspot needs a favor,” Alexi said. “I’m not inclined to turn him down due to a mitigating circumstance.”

She wasn’t going to allow her clients to turn her into their personal protection detail. At the same time, she wouldn’t allow ex-clients to use her club as a tool of destruction.

“Everything okay?” Ace asked, coming up behind Tatiana with her arm around Jasmia.

“A minor issue,” Alexi replied, “I’ll tell you about some other time.”

Great book...great series I can not wait for the next one!! I am in love with the character Alexi!! She is something!!

I love this series and the action in this is great. Alexi is a true badass. I think Tia is totally coming into her power and truly being an Asset as well as a perfect mate for Alexi. There’s some very

I absolutely love the ‘Assassin’s Core’ universe. The characters come alive and jump off the pages. I love that other characters besides Alexi and Tia help carry the stories that I devour too quickly. I can’t seem to read Ms Snow’s books slowly. Waiting for new stories just sucks.

The Nefarious Madam by Serenity Snow