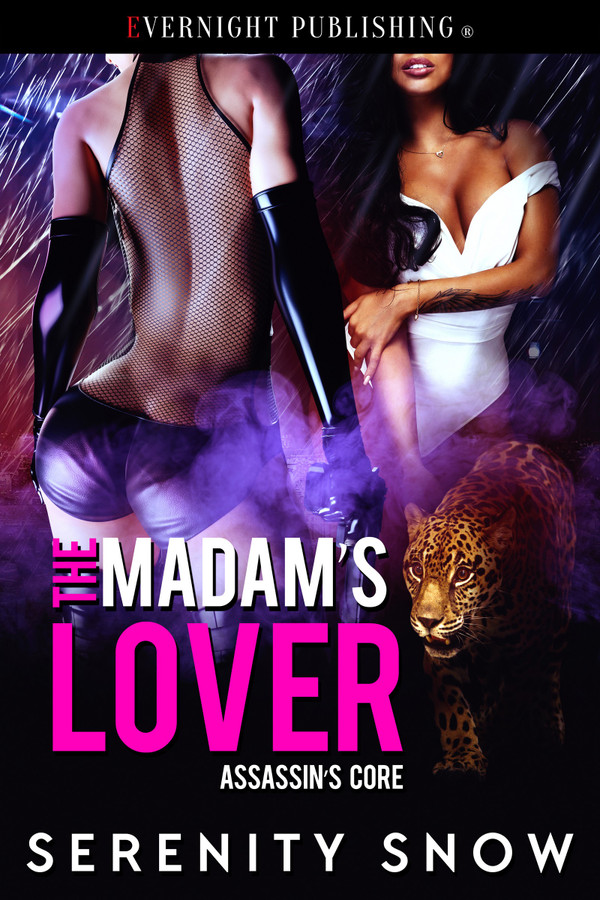 Tatiana is a buyer for a high-end boutique and a lesbian partially in the closet. On a dark road on a stormy night, fate throws her into the arms of Alexi Russo. After a night of passion, Tatiana’s dragged from the closet and thrown head first into a world of money laundering, hits, brothels, and a secret that threatens to destroy her entire family.

Alexi’s a jaguar shifter, and an assassin whose business is women. She’s been searching for a woman strong enough to walk at her side, and she’s certain Tatiana Rayne is that woman. However, Tatiana’s grandfather, a new under-boss for the mob, is determined to bring Alexi to heel.

Alexi refuses to play dead for anyone, putting Tatiana in a tough position. So, when the chips fall, Tatiana will have a choice to make—run or walk into the fires of love.

Alexi headed to the bar and got a drink. She was sipping it when a vaguely familiar scent drifted to her, more potent than the alcohol in her glass.

“What are you doing here?”

Alexi looked down at Tatiana. She was very lightly made up and clad in a black dress that enhanced the lines of her curvy body.

“Wow,” she breathed. “You look beautiful.”

Tatiana smiled shyly. “Thanks. You look pretty hot in that suit.”

“Here with the family or the boyfriend?” Alexi had to remind herself this one was off limits, no matter how attracted to her she was.

“Ewan,” she said and averted her gaze. “But I did think about what you said last night. I can’t go on living this way.”

Her black hair was pulled back in a sleek bun with a single tendril hanging down the side of her face. The corkscrew curl was begging for Alexi to curl her finger around. The necklace at her throat was a simple one of gold.

She would look better in diamonds.

Still, Tatiana was the picture of understated elegance and just the kind of woman Alexi’d want on her arm.

“I guess you brought a date?” Tatiana asked, and there was a hint of anger in her tone that flashed in her eyes for only a second before Tatiana looked away.

“No.” She shook her head. Her cat was more than a bit thrilled by Tatiana’s resentment of another woman enjoying her company.

There was surprise in her face as their eyes met again. “Why? You’re an attractive woman, nice.”

Yeah. Tatiana was off limits.

Tatiana leaned toward her, resting a hand on Alexi’s arm, and electricity sparked on her skin from the simple touch. Her cat strained to get closer, wanting those soft hands all over it.

“I enjoyed last night,” Tatiana said softly, her stare heating, and pheromones came off her as if she was sending a clear signal to the cat.

Hunt me. Catch me. Take me.

Alexi fought back a growl as her primal instincts threatened to take over. “Me, too. You look stunning.”

“I—thanks for taking care of my car. You must be one of the club’s favorite patrons to get them to do that.”

“I’m glad you got it back intact.”

“It was stupid not to check the gas gauge and to walk,” she said with a frown. “I thought someone was out there following me, but I guess it was just a dog.”

“Probably was,” Alexi agreed. She had seen a wild dog on that stretch of road before.

“I got your flowers.” She smiled. “They’re lovely. Thank you. I guess you got my work address from my application?”

“I did,” Alexi agreed. “I guess it would be inappropriate for me to ask to see you again?” Alexi stepped closer to her, and the quick thud of Tatiana’s heart reached her, exciting her animal.

The cat already loved the scent of her, the silky feel of her skin and the almost inhuman warmth of her energy. It intrigued, seduced, but not frightened.

The madam&#039;s lover by Serenity Snow. Assassin’s Core, 1. Tatiana is a buyer for a high-end boutique and a lesbian partially in the closet. On a dark road on a stormy night, fate throws her into the arms of Alexi Russo. Absolutely brilliant read. Great story. Loved Alexi and Tatiana. Couldn&#039;t put it down. 5*.

This book kept me on my toes. It was mob boss mixed with magic mixed with a little domme/sub thriller. I couldn’t put the book down.

Tatiana is a woman with power trapped by the expectations of others. She is on course to marry a man, but her heart will always crave a woman. She decides to take one last night for herself when she meets.the one she cannot deny. Alexi is a jaguar shifter and an assassin. When one of her girls at her businesses is murdered by a customer, she is out for revenge. Unfortunately, her one night with Tatiana is stuck in her mind though she knows there is nothing for her with a woman living in the closet. When Tatiana’s brother decides to cross Alexi, she has little choice but to take care of business even if she knows there is a chance she could lose Tatiana forever. When the truth comes out and the fallout drops, who will be left standing, because there is always a price in love and war. Ms. Snow writes a story which goes from the boardroom, to the ballroom, and to dark places where ugliness and crime reside. I love the visuals provided of the different places where the wealthy and strong survive. I love Alexi because she is so strong but still yearns for Tatiana even when she knows she should not. The story has danger and intrigue which includes shifters, assassins, and witches – who could pass up a story with that variety of characters?

I love all of Ms Snows book.. I own all of them and greatly anticipate every coming book... This was a great awesome read as always. Cant wait for the next one.. Although i wish she would continue the Blade and Kya story it seems unfinished and hope for a happy ending for Kya

The Madam’s Lover is a awesome. It includes characters from the Assassin’s Trilogy and has the great inclusion of my favorite shifters. Tatiana and Alexi are a very hot couple that are dealing with the world of Tatiana’s grandfather being a new mob underboss who doesn’t like Alexi and her clubs. This is a very hot story that includes everything that is sexy in Serenity Snow’s books.

Really enjoyed the book, looking forward to the next one. I hope I don&#039;t have to wait too long ;)