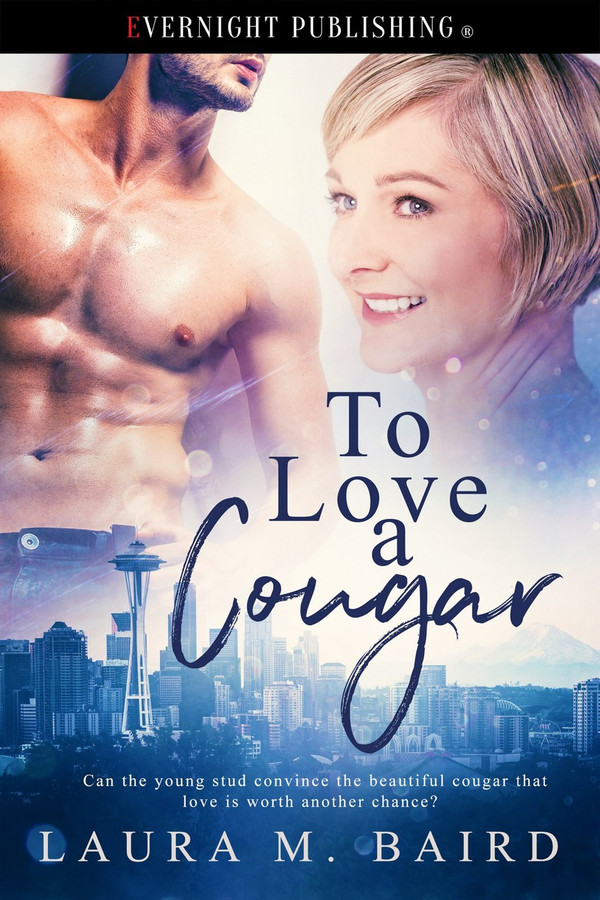 At the age of forty-nine, Jacqui’s been through divorce and cancer. Her only thoughts are to survive, never thinking she’ll ever find love again.

Grant, twelve years Jacqui’s junior, learned a lot about her through a mutual friend, and somehow knew he’d make her his. Age is the last thing on his mind. Can the young stud convince the beautiful cougar that love is worth another chance?

Jacqui was unexpectedly guided away from the entrance and into a small office, where Grant led them to a small couch after shutting the door. “Did what? What did you feel, Jacqui?”

Instead of looking at him, she concentrated on the hold he kept on her hands. “Felt I wasn’t worth it. I questioned why me, and not in the why did I have to get this awful disease way, but in the why was I surviving when someone more worthy wasn’t way.” She then looked up at him, feeling the stupid tears pooling in her eyes. “Why not the mother of four whose husband was there for every treatment, only to have it not be good enough, and she left this world, leaving behind a family who needed her? No one needed me. My husband couldn’t even stay by my side.”

“Fuck him,” Grant said vehemently, startling Jacqui. “The little bit I knew about him from Julie made me want to hunt down the bastard and beat the shit out of him. He didn’t deserve you.”

Jacqui drew back, shocked at his statement. “You know nothing about me.”

“I knew enough to become intrigued and I wanted to know more. And when Julie told me you were finally joining her here today, I felt like a stalker standing close to the door just waiting for you. Hoping I wasn’t going to make a fool of myself.”

Jacqui withdrew her hands from his, sat back, and laughed. “You’re crazy. You’re a fit, handsome young guy who could have any woman you wanted, not someone like me who’s—”

“What? A cancer survivor? An older woman? You’re only forty-nine and I’m thirty-seven. So what? Age has nothing to do with it.”

Jacqui stood and paced nervously, wondering how in the world she’d gotten into this conversation in a closed room with this man who was practically a stranger. Never mind his stunning looks and seemingly caring nature. “Yes, it does. I’m not some eager cougar who’s ready for some hot young stud to be prowling after me.”

“Cougar, eh?” Grant grinned while he stood. “And you think I’m a hot young stud?”

She closed her eyes and shook her head. “Okay, forget I said that. This is ridiculous.” She then opened her eyes, scanning toward the door, wondering how to gracefully exit. Only Grant was there, filling her view.

He slowly made his way toward her, indeed prowling, as if she were frightened prey and any sudden movement would send her reeling. Well, he certainly had her reeling, saying he was interested in her. Her? When he stopped in front of her, she stilled, doing nothing as he reached out to slip her glasses off her face and remove the beanie from her head, tossing them on the couch. Her hands instinctively went to cover her head, as if she could hide her hair—or lack of—but her effort proved fruitless as Grant’s hands intercepted hers, bringing them back to her sides. He tenderly caressed her cheeks before framing her face, his fingers threading in her fluffy hair. Jacqui felt her eyes widen as his face drew closer, his lips a whisper away from hers as his warm breath tickled and his sexy voice sent a jolt of longing through her body.

“There’s nothing ridiculous about my attraction to you. Call it crazy if you want, but I don’t care about having any other woman except you.”

His mouth descended on hers, warm and firm as his tender exploration eased her into compliance. She moaned at how exquisite the simple contact felt, after so many years of having none. Her hands gripped his biceps in an effort to steady herself, feeling the strength in his arms in spite of the gentle hold he had on her. He nibbled with his lips and coaxed with his tongue as the kiss grew stronger and more possessive.

All thoughts flew out the window as a hunger Jacqui never knew she possessed took over, replaced by a primal urge. Grant’s kisses unleashed a well of emotion she seemed to have no problem expressing. With him. Her body responded, pressing closer as she stood on tiptoes, trying to take initiative. To control the kiss and take what she wanted. Something she never dared to take in the past.

He surprised her by releasing a hand from her head and placing it on her backside to pull her roughly against him. He ground his erection into her sex, effectively taking back control. Her thoughts escalated as the friction felt glorious, simultaneously frustrating her due to the barrier of their clothes.

Grant moved his mouth along her jaw to her ear, growling with frustration as well. “Feel what you do to me.” He squeezed her ass, rubbing their bodies together while his mouth returned to hers, cutting off any response she tried to form. Moans turned to whimpers as Jacqui’s hands tried to find their way beneath his shirt in order to feel his skin. Just as she found his flesh, a knock sounded at the door, causing her to gasp as she tried to scramble away from him.

Jacqui is a forty-nine year old divorcee and cancer survivor. Her life is about to be turned upside down by a sexy gym owner Grant. Their attraction doesn’t come without concerns but can they beat the odds again and find true love? ​ I really liked Jacqui! Her attitude, her determination. We’ve all known someone affected with cancer and it’s so heartbreaking. Yes, romance stories involving survivors I find very uplifting. She also has a divorcee under her belt. She’s also middle aged. All these details really make a great character to cheer for. Grant is a little too good to be true. He’s instantly attracted and falls too quickly for her. The romance is just way too fast which really hurts their chemistry. This book is good but it needed a second story line to keep the pace going. The ending is super sweet and made me smile!

It&#039;s a pretty solid 4.5 stars. I liked the characters and it was well-written. My only complaint, there wasn&#039;t more storyline. I wanted to know more about their past and struggles. They moved too fast for me but then, in all my under-utilized brilliance, I realized they have to. To Love a Cougar is a novella, duh. They have to move fast. If you&#039;re looking for a nice, sexy read, you won&#039;t be disappointed. I will definitely seek out Laura M. Baird&#039;s other books. She has a fan in me.