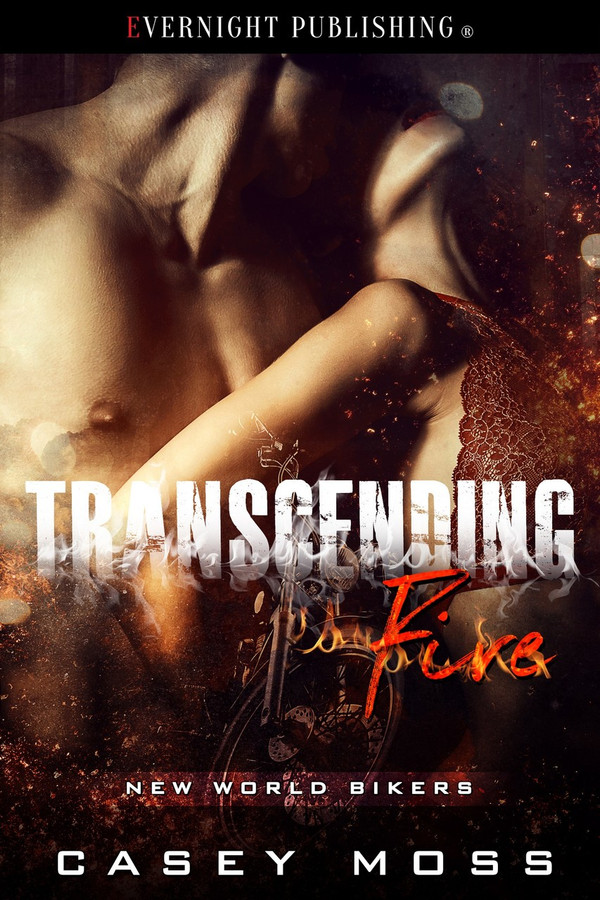 Hunter Macario wants one thing—a place to belong. When given an opportunity to solidify his position in the Devil’s Thunder MC, he takes it.

Dragon’s Clan member, Safaia King, believes she’s found the man from her people’s legend and her dreams. She has one goal, even if he’s in a rival club—to make Hunter hers and keep him safe so he can fulfill their destiny.

After Hunter makes a huge mistake, he’s sent to where Safaia lives—an alternate universe called The Den. In this new world, sex, battles, and secrets abound. Hunter must survive The Den to right some wrongs or else he could lose everything he’s ever gained, including his home and Safaia’s love.

A wicked glint lit her eyes, and a playful grin spread across her face. She smoothed a hand down his hard chest. “I love the definition of your muscles, Hunter, how they shudder beneath my fingers when I touch you.” Inch-by-inch, she continued sliding her hand down his torso. She moved her hand between his skivvies and skin. Saf circled his cock and stroked him in time with the motions of his fingers within her. Desire pulsed through his body, setting it aflame. She pressed her face against his chest and playfully bit his pectoral as she rode his hand.

Adrenaline and arousal increased his breathing rate, and a warm buzz raced through him. The pull between them seemed so intense, undeniable, as if they had to be together or perish. He felt like one of the club’s customers addicted to black chip and needing a fix before he went crazy with want. And his drug of choice?

He wanted to eat her up. “I want to taste you. Lick up your juices and have you squirm beneath my face.” Hunter yanked down her jeans and repositioned her until her ass was at the edge of the boulder.

Sinking to his knees, he placed himself between her legs. Looking forward to tasting her sweetness and feel her softness after facing the harsh realities of his life, he traced a line of gentle kisses along her inner thigh from her knee to her pussy and then fastened his mouth on the sensitive folds between her legs. When he dipped his tongue into her canal, she shifted her butt to allow him better access. He reached up and snaked his rough hands under her shirt, concerned only for a moment whether she enjoyed or loathed the coarse touch of his dry, work-worn skin. She moved the cloth and her bra out of the way.

Pushing away all his thoughts and focusing on her—his carnal treasure—Hunter kneaded her tits while he teased her clit. He loved the taste and scent of her musky flesh and lapped up her essence as he said he would.

She grasped his head, weaving her fingers in his hair. “Oh, Great Universe. This is. This is.” She panted and grappled with his locks as a low, deep moan rolled from her throat. “I think I’m going to come.”

The first night they’d met, their lovemaking had been hot and fast, more wham bam thank you than let’s linger and relish this. This time, though, he wanted to savor her, make her feel all sorts of naughty pleasure as he took his own.

Saf bucked and tried to scooch away, but he grabbed her hips and kept her from moving away from him. Unrelenting, he tongue fucked her. She struggled and wriggled, but he continued his assault, plunging his tongue in and out of her, licking up her wetness, and nipping at her clit. Safaia pressed on the back of his head and lifted her ass. Spasms racked her body. She cried out his name.

Bringing her to orgasm thrilled him, but his selfish streak came forward. He wanted to enjoy her and feel his own pleasure, so he rose, stepped back, and removed his jeans.

AWESOME STORY. If you are looking for a great read this is it.

A new take on MC romance with shifters and magic involved. These two are drawn to each other as destiny is fulfield in this exciting new book series . Hunter &amp; Safaia - must survive -the Den and find there fate. Great start to a new series.

Two people from different worlds and different lives, both destined to do great things, together. How will they fulfil their destinies? Hunter aka Runner is a member of the Devil&#039;s Thunder motorbike club who live in a futuristic earth, hundreds of years from now. They are the first &#039;family&#039; he&#039;s had since being shunted from foster home to foster home where he&#039;d never felt wanted or like he belonged. Working as a mechanic in the garage and organising the &#039;runs&#039; for the MC gives him purpose and a sense of belonging. He wants to climb the ranks and hopefully take on the reins of leadership one day. Safaia comes from an alternate reality. She is the daughter of the leader of the Dragon&#039;s Clan who are rivals to Devil&#039;s Thunder. Her encounters with Hunter in dreamscapes makes her believe that he is the fabled one, the one foretold to be her mate and to bring peace between the realms. So she set about to meet him in real life. The connection between Hunter and Safaia is instantenous. After they spend a sizzling night together and she disappears, Hunter hopes to find her and move their relationship to a different level. But situation runs away from him. His best friend, Dexter, with whom he joined the club has plans to attain top position at the club through devious means and wants to get rid of Hunter in the process. This sends Hunter on a quest to find himself and prove his worthiness to be part of Safaia&#039;s life. Is he really the fabled one and will he fulfil his destiny? I loved this story with its blend of a futuristic dystopian world and an alternate fantasy realm. Safaia is a woman who knows what she wants and isn&#039;t afraid to go for it, no matter the outcome. I connected with her instantly in the same way that I fell in love with Hunter. Hunter was a stand-up guy and very trusting of people. Unfortunately that came to bite him in the behind. But I love that when he was tested, he passed with flying colours and that&#039;s what you want from a hero. This is a story every lover of urban fantasy romance must read. Loved it. Reviewed by Kay I volunteered to review this book

AWESOME STORY. If you are looking for a great read this is it