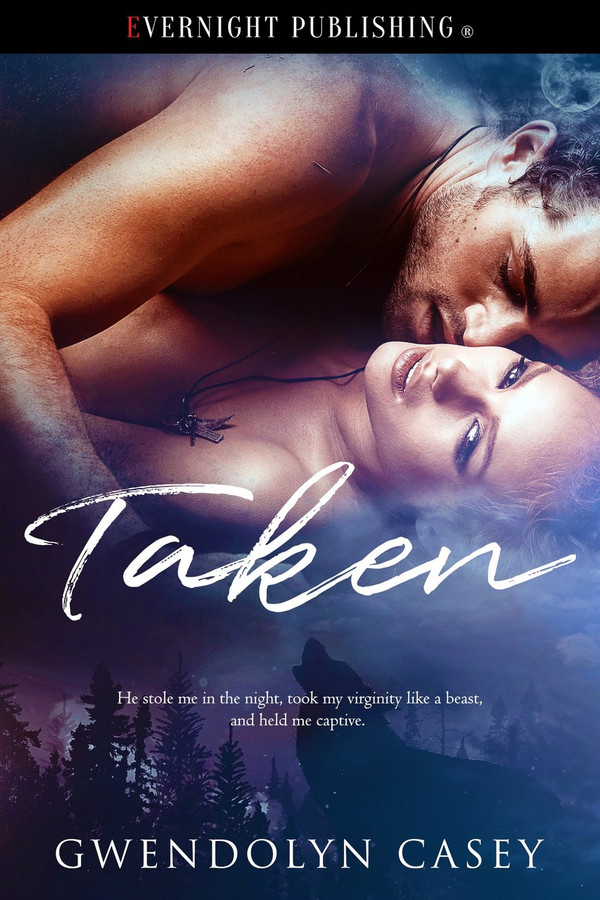 He stole me in the night, took my virginity like a beast, and held me captive.

He says that I belong to him, that I am his mate. He's a madman. I should hate him with a passion but all my passion is reserved for his pleasure. I feel myself changing and my resolve is waning with every passing hour as he pulls me further into his world.

I've never felt anything like this before and I don't want it to end. He has enslaved my body and bewitched my mind. It's only a matter of time before my heart is taken.

Suddenly there is movement at the mouth of the cave. I clutch the blanket tight to my chest, like it’s body armor rather than thin fabric.

A large, dark figure comes into the cave and my breathing picks up.

It’s a wolf. As in wild animal. As in predator. It is also larger than any wolf I’ve ever seen in a zoo or on TV. His fur is dark brown with small patches of gray along his jaw and his underbelly. The eyes are ice blue and big. So big that I can see spikes of yellow in the iris.

Aren’t wolves pack animals? My brain says through the fear. I look behind it, but there doesn’t seem to be any others. That doesn’t mean there won’t be more soon. That means that I should probably get out of here as soon as possible.

I’m about to stand up when the animal walks toward me slowly, stopping at the edge of the blankets. The blue-yellow eyes are focused and it lifts its nose to sniff at me.

He is going to eat me. I just know it.

Then something happens. It’s so fast that my eyes can’t seem to focus on all the movement.  I hear cracking and the wolf is changing. He is getting bigger and changing color. I blink a couple times and then there is a man standing in front of me.

It’s him. Donovan. He is standing just a few feet away, very tall and … very naked.

The fire light plays across his skin, dipping into the valleys and curves of his muscles. He has the body of a hunter, toned but with enough bulk to make his shoulders and pecs absolutely drool worthy.

His chest and abs are sprinkled with dark hair, which I never knew could be attractive until now. My generation prefers the hairless models. But now I see how sexy it can be.

I can’t seem to stop my eyes from going to the obvious place. In fact, his stomach muscles seem to point me to it.  His erection stands straight and large from a patch of the same dark hair that is on his head. The shaft curls slightly toward his stomach and almost reaches his belly button.  It’s so long and … thick. It will probably kill me. While his cock is scary, it is also making me tingle between my legs.

I look up to his eyes and they are slowly moving over my body. If his hard cock didn’t give away his intent, then the look on his face certainly did. Hunger, deep and aching but also resolute. As he continues to stare, I swear I can feel his lust in the air somehow, all around, like I’m lying in a tanning bed of his desire. My body responds in the natural way. My nipples harden and there are tingles at my center.  He sniffs the air and smirks at me, like he knows what’s happening to my body.

I must be dreaming. I did fall asleep imagining the next time we met. My subconscious must be taking creative liberties. If that’s the case, then I should just let the dream take its course. I probably won’t remember any of it tomorrow, just like all the others.

But what if it’s not a dream? This didn’t feel like a dream. What if he stole me from my tent?  But then what was with the wolf?

Donovan steps on to the bed of blankets and I push myself back, dragging the blanket with me.  Since I can’t decide if this is a dream or not, it’s probably best to act like it isn’t.

I know, deep down, I want what he wants. But I can’t simply lay here and let him have me. That’s crazy. I look around him to the cave entrance, wondering how to get there with him in my way.

Donovan’s lip curls into a snarl as I stand.

For a moment, we stand there with only the sound of the fire crackling between us. His face is daring me to try and escape. I try to edge off the blankets to go around him, but he counters every move with one of his own, placing himself between me and the doorway.

Fuck it, I think as I drop the blanket and run. I dash one way and then another, trying to confuse him, like a running back going for the end zone.  I manage to get past him, but he is on me in a flash and I only manage to peek outside the cave where it is still nighttime.

He picks me up around the waist and lifts me easily over his shoulder. I smack and punch at his back, but I’m slightly distracted by his toned ass only inches away. He carries me back to the blankets and sets me down gently. I struggle and hit at him, but he captures my hands in one of his and pushes them above my head while his other tangles in my hair. My lower half is pinned by his and when I try to wiggle beneath him he only snarls.

His scent wraps around me. He smells like pine and sawdust, but there is something underneath that I can’t name. Something strong and masculine that is addicting.

“Donovan,” I say, trying to break the spell or whatever it is that has overtaken us both.

He looks down at me and I know that there is no escaping what is about to happen. The resolve is there in the set of his jaw and intensity of his gaze.

My nipples brush his chest as he moves closer and I feel an electric current move through me at the contact. He leans down and drags his nose along my neck, breathing in my scent. I feel his cock, huge and hard against my thigh.

He licks my neck and nibbles my skin over my clavicle. His hand leaves my hair and trails down to my breast. He plumps the mound and squeezes while his mouth takes my other breast into his mouth, sucking gently and teasing my nipple with his teeth.

“Ah,” I say as my traitorous body arches into his mouth. His mouth and roughened fingers feel amazing against my skin. He switches his mouth to the other breast and bites it gently before soothing it with his tongue. My hips fly upward at the sensation, seeking his attention.

He releases my hands to move further down my body and capture my legs.  He runs his nose under my belly button and growls again, the reverberations going straight to my clit.

Donovan continues to move down until his shoulders wedge between my thighs.  He keeps eye contact as his tongue makes first contact with my center. It feels soft but hard at the same time. I bite my lip to keep from moaning. He licks again, harder. The moan escapes and my head drops back.

Some girls have all the luck. Mackenzie is on a trip with friends, one who wants to be more, just minding her own business when she runs into the rest of her life. And she&#039;s not quite sure how she feels about that. The rest of her life is gorgeous, intense and a tad bit scary and is named Donovan. When she finds herself taken and seduced, it&#039;s more than just the shock. It&#039;s what else Donovan has to reveal that shakes Mackenzie&#039;s world on its&#039; axis. This was a quick over the top insta-love. My favorite. Some might be offended by the &quot;forced seduction&quot; but I didn&#039;t find it too much. More that her brain had to catch up with the rest of her and he nudged it along. Does she say no? No. Should he have stopped. Yes. If you find that offensive don&#039;t read the book. After the initial leap to sex, these two have other problems that involve politics and family members as well as some adaptation on Mackenzie&#039;s part. And I mean adaptation. The first line says it all for me, Mackenzie fell into a mess but it turned out to be a mess of luck with a happily ever after. A good read.

While I can say this book is definitely not for everyone (forced seduction), I loved it. In fiction, I love a strong, dominant male who knows what he wants and goes after it with determination…and maybe a little felonious behavior. (In real life, I’d run from such crazy behavior.) The story is told in first-person by Mackenzie. Mackenzie is a red-headed twenty-two year old virgin who has never been able find a connection with any guy she has dated. She is kidnapped by Donovan, a werewolf, after they have a run-in at a local gas station. I loved that first meeting. The story is well-written. I don’t recall seeing any errors. 5 STARS: The story is over-the-top and just so delicious. I loved Donovan’s intensity. My Kindle is still smoking. This is the first book I&#039;ve read by this author, but I look forward to reading more in the future.