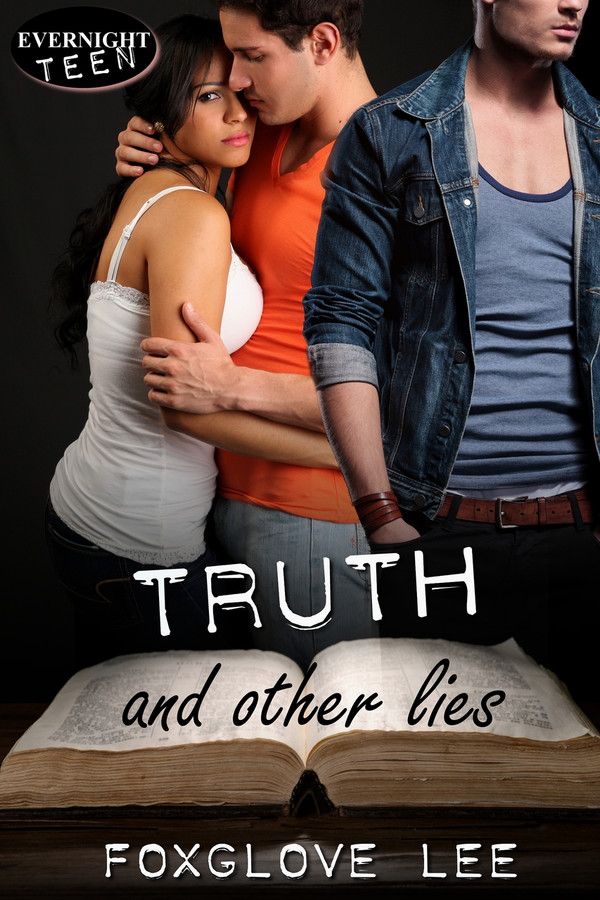 Have you ever wanted to get noticed? Have you ever felt like no matter how hard you worked or how hard you tried, nobody in the entire world cared what you did? Well, what if someone famous—and we’re talking Oprah-famous, here—noticed you for the one thing you wish you could hide? For your one big secret…

That’s exactly what happens to 18-year-old Kenneth McIntyre when television guru Prahna Mehta hails his self-published novel as the next bestseller. Little do his new fans know Truth and Other Lies wasn’t written by Kenny at all… and it isn’t fiction. Kenny’s been keeping secrets for years. Sometimes he feels like he’s lying to everybody he loves.

When Kenny gets swept into stardom, how will he hide the secrets he’s kept for years? And, if his lies are exposed, will anyone stay by his side?

Nobody cried more than Kenny’s mom.  Not even Kenny.

He started to understand that saying, “he was beside himself,” because that’s exactly how he felt.  At Millie’s funeral, he kept glancing at the empty seat beside him—one of five they’d reserved in the front row for Millie’s family—because he felt like the real Kenny was sitting in the next chair, and his body was just an empty shell.

Millie was right, all those times she’d said her parents wouldn’t come to her funeral.  She’d told Kenny and his mom, “You don’t understand, guys.  I’m already dead to them.  Why would they go to my funeral when I died three years ago?  I died when I came out.”

Kenny didn’t believe that, of course.  When he and his mom made the funeral arrangements, they even asked to have some of the readings done in Chinese.  If her parents did come—and Kenny really and truly believed they would—they’d certainly appreciate the scripture in their mother tongue. They were very religious people, from what Millie said.

The funeral went by in a haze.  As they drove to the cemetery, all he could think about was the look of serenity on Millie’s face as she lay in that coffin.  That gleaming white coffin, like Liberace’s piano.  She would have laughed at it.  She would have thrown her head back, cackled, and said, “You’re gonna bury me in that?”

Kenny could still hear her laughter.

When his mother pulled into the cemetery parking lot, he pressed his head against the cool glass and cried.  More than cried.  Sobbed.  He felt like his heart had been ripped out of his chest.  It was an actual, physical pain, and it hurt so badly he worried that, when he opened his jacket, his crisp white shirt would be stained in blood.  He almost wished it was.  He wished his wounds could be obvious to the world.  He wanted everybody to understand.  Nobody did.

Except his mom.  She squeezed his hand so hard she jammed his knuckles together.  That was a good pain, a useful pain.  He couldn’t bring himself to look at her, but he gripped her hand, trying to show some support.  Because she was hurting too.

“Come on, buddy.”  Mom snapped a tissue from the box and blotted her face, wiped her nose.  “Let’s get out to the gravesite.”

Millie would have thought all this grief was hilarious.

Plenty of people from school had come to the service.  Far fewer had come out for the burial.  Kenny’s mom had paid for everything—the funeral, the coffin, the plot—and it didn’t come cheap.  In all, she’d spent nearly ten grand, most of it on credit.  But Millie was worth the expense.  She was the daughter Mom never had.

Kenny felt old before his time, having to deal with all this death stuff.  But there he went, thinking about himself again.  If Millie were there, she’d tell him to be happy. “Be happy you’re still alive.  Be happy the sun is shining and the birds are chirping.  Be happy spring is in the air.”

Well the sun wasn’t shining and the birds weren’t chirping, not for Kenny.  And spring?  Spring was just a pile of mud. Slick mud and stinking dog crap under a mound of melting snow.

That’s all Kenny could think of during the burial: how Millie was going underground, under all the mud and crap and snow.  She’d never feel the sunlight on her skin.  She’d never hear the birds. She’d died in the springtime of her life.

This is a sweet, intriguing book that maneuvers around several curious but significant subjects. It may seem a tad daunting and a bit sad at the start, but everything gets tied together by the end and I felt that happened in an enjoyable and satisfying manner. All the primary characters are teenagers and the dynamic trio includes two guys and a girl. Hovering over the trio is the cousin of one of the guys whose accomplishment and memories are never far from the surface. Touchingly adorable! Kenny has wanted to be a writer since he was five years old. He self-publishes sci-fi stories at an online site. Still living at home, his mother persistently informs him that he is not making enough money to contribute to the household and he should get a real job. She can be harsh, but she did take in his friend Millie when she was thrown out by her family when she disclosed she was a lesbian. A life altering situation occurs for Millie during the time she is living with Kenny and his mom. What happens to Millie really hits Kenny hard. It takes him a while after Millie is gone to read the book she wrote and wanted him to edit. That book turns Kenny&#039;s life totally upside down and inside out. Suffice it to say, nothing is the same for him. Astounding! June and Wyn, who is Millie&#039;s cousin, are a couple initially. Millie was hoping that June would be her girl, but that was not to be. Anyway, this couple gloms onto Kenny in an interesting and passionate way. I think it took them all by surprise. When Kenny&#039;s life shifts dramatically because of Millie&#039;s book, situations occur that allow June and Wyn to become even closer to Kenny. However, their linkup doesn&#039;t happen in any kind of standard way. The trio also has its ups and downs and needs a serious time out at one point. Fascinating! A major television talk show host, mystic of sorts, and savvy business woman praises Kenneth McIntye&#039;s apparent self-published masterpiece &quot;Truth and Other Lies&quot; to the hilt. Kenny knows that he only wrote the title to Millie&#039;s book, but he goes along with everything that comes his way. Finally, Kenny convinces everyone, including the talk show host, to assist him in kind of linking Millie into the scheme of things. Only the core group has a clue as to Kenny&#039;s intentions. It turns out to be an outstanding scramble around the mulberry bush creating a happy ending and significant testament in Millie&#039;s honor. Beautiful!