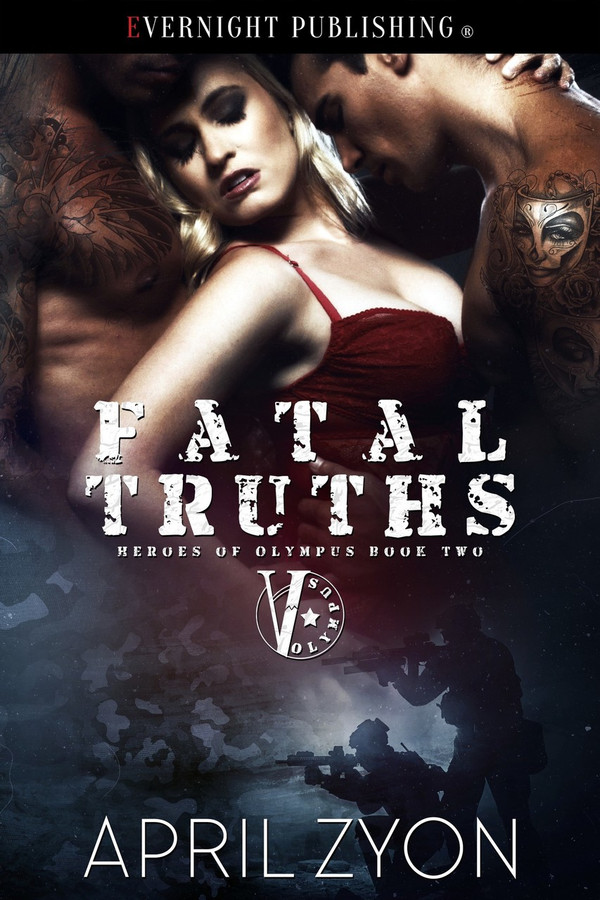 Kasper St John was rock solid in her life. She grew up in a loving home, and her wonderful adoptive parents raised her to be a strong woman. She also knew any truth from the touch of another person's skin.

Kasper’s world turned upside down after the deaths of her parents, even more so when she learned a man who worked for her father’s company was the reason for their deaths.

James Ashton and Victor Dudayev served with each other for a number of years, and their training as Scions on Mount Olympus took their friendship to a higher level. They had always been close but something clicked when they were on Olympus and they knew one day they would share a woman, a woman that would be their forever.

When they meet Kasper they know she's that woman. They'll do whatever it takes to make sure she's safe from those that want her dead, if she doesn't beat them to it. With help from the other Heroes of Olympus, and perhaps a little nudge of help from the Gods, they might just get their happily ever after.

Ares made his way toward his men, the Scions and protectors of the Descendants. These men were all specially trained military men before he’d gotten his hands on them. Now, after having trained in the halls of Olympus, they were the Heroes of Olympus. Deadly, powerful men whose very DNA had been changed by spending time in the Heavens.

Ares needed to explain their next case, a case that they were already aware of, since they had just attended the funeral of the woman’s adoptive parents’ weeks earlier. Ares took a deep breath before he addressed the men. “I need to talk to you about the funeral you all attended more than two weeks ago.”

Camilla spoke. “You mean the one where the daughter was smiling when she was getting into her limo? From what I hear from the boys, that man was a hero, and his wife was as close to a freaking saint as possible, so why was the daughter smiling? Did she kill them? Are you sending the guys to take her in?”

Ares could see that they all believed Camilla. Not good. That wasn’t at all what he had been thinking they would ask. He never would have thought that anyone would believe that Kasper St. John was a bad person or a person who would want her parents dead. Then again, no one really knew her the way that Artemis and Ares did.

“No,” he said with a sigh. “I’m sending you in to protect her. There have been several attempts on her life. She’s Apollo’s descendant. Kasper is actually a very good person, but I know you, Cam, and I know that you’ll have to see that for yourself.”

Camilla snorted. “Of course. He’s a womanizer and an ass, so of course she would be his.”

Ares laughed. “That’s my girl,” he said with a wink. “But he’s not like the myths state. One day, you’ll meet him and understand. Oh, and just so you know, Artemis will be around more often. She has been the one watching over Kasper, and she’s rather attached to her, so don’t be surprised if she drops in from time to time.”

“Great.” Camilla rolled her eyes. “I love you, Uncle A, but seriously?” She grumbled. “Okay. Fine. Whatever. So are you going to give us all the details on this girl?” Clearly, Camilla didn’t like Kasper, but she would soon learn what a gentle soul the girl was.

He looked to the men. “Do any of you have questions?” He wondered which of these men were Kasper’s—he knew it wasn’t either Mikhail or Gareth, which reminded him he needed to speak to Mikhail alone. Mikhail needed to know he was going in to save his half-sister.

“We’re going to need to have full specifications on her house, office, those around her, both relations and otherwise,” Gareth said. “Every single detail about her life from the moment she was born.” Gareth frowned at Ares and then his gaze cut to Mikhail, back to Ares, and narrowed more. The man didn’t ask the question on his mind, though.

“Every part of her life will be on your desks in the war room. Blueprints to her home, as well as all security codes, are in there as well.” Ares looked to Mikhail. “She isn’t what you’re all thinking. She’s not the smiling heiress who’s happy her parents are gone. You’ll be surprised at what she was actually smiling at.” Ares paused before saying, “Kasper smiled because she saw the love Camilla has for Mikhail and Gareth and was in awe of that love. It gave her hope for humanity.” He saw the looks of surprise on the faces of everyone present and nodded. “Exactly. Now, what other questions do you have?”

“Until we go through the intel, none,” Gareth spoke again. “Guys, let’s get working on what Ares has given us. We need to be ahead of the curve on this one, and quickly.” He moved toward Mikhail and lifted a brow. Mik gave a small nod without taking his eyes off Ares.

When the others were gone, Mikhail addressed Ares. “What the fuck didn’t you say in front of the others?”

“We should go for drinks. Where would you like to go?” Ares asked, watching the tick in Mikhail’s jaw. “We at least need to have a seat, because what I have to say is going to knock you on your ass. Trust me on that.”

“There’s a pub three klicks from here. It’ll do,” Mik said with a definite growl to his voice. Ares knew the man hated being put off. Saw evasiveness to be a weakness. Ares was waiting because he didn’t think Mik would want anyone to overhear their conversation. At least not before the man could process it himself.

“Then hold onto your shit.” Ares lay a hand on the man’s shoulder. Soon, they appeared in the pub without anyone being the wiser. Taking a seat at a table in the rear of the bar, Ares said, “Order a drink, and when the waitress is gone, I will tell you.” Ares leaned back, raising his hand to get the waitress’ attention. “Trust me, you will want it. Hell, I want one, too.”

Mikhail ordered a double Scotch neat—top shelf, of course. He looked at Ares as if daring him to deny Mik the pricy beverage. One hand rested on the table. Other than his eyes, Mik sat perfectly still. The man reminded Ares of a predator waiting to attack.

April Zyon is inarguably one of my very favorite authors. That being said, this series, Heroes of Olympus is one of the reasons. She comes up with some of the most truly remarkable book series ideas that keep it fresh. Seriously. In a romance world where we are inundated with billionaires, secret babies, virgins, and a mind-numbing combination of all three of them (see the billionaire&#039;s secret baby from the virgin), this series has wonderful heroes, Gods and Goddesses, and real women in trouble. Not to mention humor and really hot sex. In book two of the series, we have Kaspar St. John. After her parents are killed, she finds out through her gift that they were killed, and she may be next! Enter her new protective detail, which lucky for Kaspar, include the sexy James and Victor. They are instantly attracted to Kaspar, which means they&#039;ll do anything to protect her. Of course, this wouldn&#039;t be an April Zyon book if that were it, but you really have to read this yourself. Suffice it to say, there are lots of yummy twists and turns, surprising family reveals, and bad guys galore. You&#039;ll really want to buy this one!

Kasper has the unique ability to see if someone is telling the truth just by touching them. Her world is destroyed when her parents are killed and she knows who’s responsible. When she meets the mysterious Victor and James, it’s like meeting her soul mates. But danger isn’t far away. Can they keep her safe and claim her heart? Did I ever mention how much I love twists on mythology? The Heroes of Olympus series by April Zyon really fills that category. There’s a great deal of twists, turns and details that make me really feel like I’m in this world. I love the drama in Kasper’s life because it feels so real. Victor and James are so damn sexy. I love how they interacted with Kasper. Together, the three of them really heated up the pages. The romance did happen quickly, though. I would have loved to them to get to know each other a bit more before all the sexiness happened. ​ Fatal Truths is another great addition to the series and I can’t wait to read more!

I received an ARC for an honest review. Kasper has lost the only family that truly loved her. And with the death, danger follows Kasper as she deals with not only the death of her parents but the inheritance which comes with it. However Kasper is about to receive help from an unexpected source. James and Victor are drawn to Kasper as soon as they meet her. When the attraction is mutual, can the men keep Kasper safe even as they lose their hearts? I loved this story by Ms. Zyon. Kasper is a strong female character who is sexually submissive. She falls for James and Victor just as quickly as they fall for her. But her protection and a secret from her past add to the drama that is her life. I love that James and Victor accepted their feelings relatively quickly. That being said, they didn&#039;t admit them out loud nearly as fast but I like that to. Ms. Zyon gave us a story that is full of laughter, love and danger. The emotions felt real and believable. And the characters are well developed. This story is a wonderful addition to this series and I can&#039;t wait to see where Ms. Zyon will take us next!

Loved it. This is the 2nd book and what a great follow up to First Contact! I loved Kasper and her men