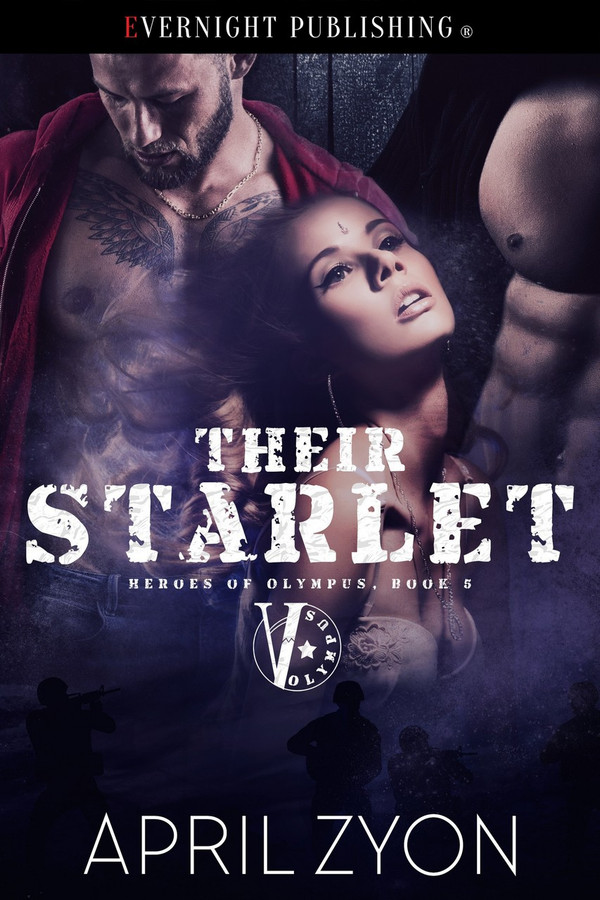 Brooklyn Anderson is America’s sweetheart and has starred in movie after movie. However, the one thing she craves is love. It seems that every man she slept with broke up with her within two days, having found the one-true-love of his life.

This is only natural, since Brooklyn is the descendant of Aphrodite, Goddess of Love—but she doesn’t know it yet. Now her life is in danger, but her stalkers are acolytes of Hades, whose plans for Brooklyn are nefarious and deadly. She needs more than mortal help.

Antonio Morales and Stefan Patras, along with a couple other teammates, answer the call of the gods to go to Hollywood and protect the newly revealed Descendant of the gods: Brooklyn. When they met the gorgeous woman, both Antonio and Stefan knew that she is it for them, the one that they should bond with.

But can they keep her alive long enough for her to love them? Or will Hades’ acolytes succeed in their plots against her?

“Thank you for the wonderful meal. It was perfection as usual,” Ares told the men that were gathered round.

“As you know, we were here for more than just your cooking,” Dion stated. “The Descendant that I’ve been watching over is in trouble. She was almost snatched a couple of times. She’s high-profile, and I think that’s the only reason she hasn’t been taken before now. She’s the descendant of Aphrodite and will need protection around the clock when she goes back to Hollywood for the final filming of the movie she’s in.”

“I’m assuming that you want us to watch over her?” Gareth asked. “Though high-profile isn’t exactly something we’ve taken on as of yet. We’re always up for new challenges, even if it is in Tinseltown.”

“Yes, at least four of you. Two for the daytime and two for at night. Make sure that they are the ones that you will be able to spare for the next two months, perhaps less, but no longer. They will need to be versatile and able to blend in with a crowd as well.”

“We don’t split the team up,” Mikhail said. “At least not without all hell breaking loose. We work together for a reason, and it’s because we each bring a particular skill to the table. It might never be needed, but it’s better to have available than left at home. So give us a damn good reason to send only four on this job.”

“Because you will need the other eight here. Trouble is going to come to your doorstep. We don’t know exactly what sort yet, but there is trouble coming. You will be needed here while the four going will be required there for her. The four single men need to go.”

“Well that at least lets us off the hook of picking straws,” James said. “Though sending the singles makes sense, especially if she’s one of the Descendants like he’s suggesting. I don’t like the idea of us splitting up either, but if something is coming our way, no way in hell am I leaving Kasper here without us. No offense, babe, I know you’re damn handy with that rifle, but that’s one gun against apparently not even the gods know what.”

“She is one of the Descendants. She’s also just broken up from an engagement. The man she was engaged to was one of Hades’s acolytes. He was dangerous, and she’d cut off all communication with him. It pissed him off all the more. He was unsalvageable, and in fact he has been killed by Hades’s other acolytes for failing.”

“Good to know,” Stefan muttered. “Well, at least we’ll see some action. We’ll need all the information of course, plus the locations we’ll be at on this trip, and the woman as well. Anything and everything, per the usual. Might as well start studying up on this. When do we start?”

“The full files will be in your inboxes, all of the scans of the threats against her as well as the images of the men who have all been part of some sort of plot to kidnap her. Although wouldn’t it be woman-nap?” Dion’s voice seemed as if he were bored instead of talking about a woman that he helped to raise.

“Complete dossiers will be available to you all. If you need anything, just ask, and we will try to get it to you. You all understand that we aren’t able to give the whole ball of wax away, but we will try to give you enough to make a candle,” Ares said, proud of himself for the references he was making.

All the people at the table stared at him for a long, very uncomfortable moment before they began to talk among themselves. “We’ll need to get you out there as early as we can so that you can get a feel for the place,” Mik said. “The jet will have to come right back here in case we need it for whatever reason.”

“We should also go over the areas she’ll be residing in, and working to cover all the bases. Without the additional manpower you guys will have to be on your game fully,” Gareth commented. “It would be helpful to have a god on standby in the case of an emergency if they happen to need backup from this end temporarily.”

“Well, good ole cousin Dion will be there with her. I travel with her everywhere. So get used to me.” Dion all but preened. “I adore that girl, so whoever is hers had better be damn thankful that she’s theirs. She’s an amazing being. The only trouble is…” He looked to Ares.

Ares sighed and said, “The trouble is that she is love.”

Brooklyn Anderson&#039;s life is in danger. This celebrity is a descendant of the goddesses Aphrodite and needs rescuing like yesterday. Both Antonio Morales and Stefan Patras are definitely on the menu for this damsel. Are they ready to bond? Readers would gladly tell them please help me or do whatever they want. They are definitely delicious. Read to find out why Their Starlet is not to be missed! Their Starlet is exciting to read. Readers really get a MMF menage relationship in the works, steamy scenes, sexual tension, chemistry between them are beyond spicy, action and danger. The author writes a great story with good dialogues. I liked how the author made the characters come alive. The pacing was right and the setting was very realistic. The characters have a good depth of personality. This is truly an escape reader for booklovers. April Zyon delivers her original style in this story. I am amazed once again! Read the story to discover their happily ever after, and how the story unfolds. This story is definitely a winner! It deserves 5 Stars!

April Zyon’s Heroes of Olympus series makes a comeback with Their Starlet, with the next two heroes up to get their key. Our heroine is Hollywood starlet Brooklyn Anderson, who has just had a break up with her jerk of a fiancee. She catches him cheating on her, but her cousin Dion tells her she just hasn’t met the men for her. When she gets two hot bodyguards to keep an eye on her and she’s going to need them when she gets to her very last movie set. Stefan and Antonio have finally found their woman, and will do anything to protect her, even from a jerk of a movie director, and a caterer who means her harm. And Stefan has piercings in some totally yummy places! It’s a wonderful read that I just couldn’t put down!

Brooklyn is done with Hollywood. She has terrible directors, cheating boyfriends and though she doesn’t know it yet, her life is in danger. She’s a Descendant of the Gods and only two sexy men can keep her safe. ​ Brooklyn has no idea what’s she in for when she meets Antonio and Stefan. The sexy hunks are her bodyguards but some strange things start happening. Once she finds out who she really is and that she’s mate to these guys the story screams romance. Although I like the story, I kind of feel like all the plots are blending together in this series. The action is great and I like the bits of humor thrown in. The secondary characters are always so well written and fleshed out. This is the fifth book in the series and I’ve read all the previous ones. They’ve been enjoyable. If you like mythology and heavy romance then you’re going to love Heroes of Olympus by April Zyon!

I&#039;ve been following April Zyon for awhile now and this series is one of my favorites. Antonio and Stefan are sent to protect Brooklyn and know immediately that she is the one for them. They didn&#039;t push her into the relationship with them and that was nice to see. The story was very easy to follow and I loved it. I know there is only one more book to go and I&#039;m excited but sad at the same time. Go ahead and get this book because you will love it.

I didn&#039;t want to read this, it means we only have one more to go!!! No! It can&#039;t be over! What will I do then? Brooklyn was ready to leave her Hollywood life behind, she just wasn&#039;t expecting the changes that were coming in her life! I enjoyed the way Antonio and Stefan let her adjust at her own pace, and didn&#039;t push or be all caveman on her! And don&#039;t even get me started on the sexy scenes, hot!!!! This whole world is completely amazing! I never would have imagined writing about Gods this way! That would be why I&#039;m a reader, not a writer!! Lol But really, I hate that we&#039;re almost done, I&#039;m excited for the next but sad at the same time!

Brooklyn is ready to leave Hollywood but she has one last job to finish and a director who is being a smuck. It doesn&#039;t help that she is a key and therefore in danger from more than the run of the mill crazies. Antonio and Stefan are surprised that Brooklyn is theirs. They are happy that she is ready to return home to Texas. But can they keep her safe long enough to make it to her new home? I thoroughly enjoyed this addition to Ms. Zyon&#039;s Heroes of Olympus series. Brooklyn was more down to earth than one would expect and finding her heart snagged by not one but two hunks just made this story that much better. I really enjoyed Antonio and Stefan. Both men were more laid back then what we have seen to date and fit well with Brooklyn. I love that Ms. Zyon made their courtship feel effortless even as danger surrounded the trio. I enjoyed seeing the sense a family that surrounded not just Brooklyn and her guys but also the men and Gods. This story was well written and enjoyable. Ms. Zyon gave us a relationship that started with friendship and grew from there. I loved seeing Brooklyn accept what Stefan and Antonio were becoming to her even as she got to know them outside of the bedroom. I enjoyed the dialogue and the humor. And I cannot wait to see what she has in store for us next!

I loved this book from start to finish. Me Zyon has the Insta love formula down pat but writes it in such a way that it still tugs you in from the first spark. This series by the author is a favorite of mine, however I am sad to read on her website that there is only one book left in this series. I can&#039;t wait to see how it all turns out.