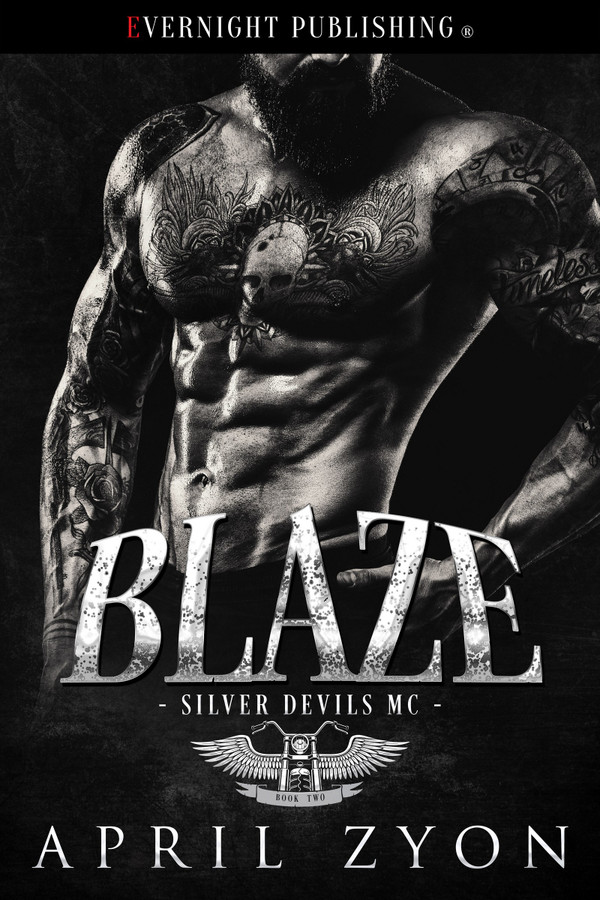 Loving Rowan has been something Blaze has lived with since before the woman was, well, a woman. He felt like a pervert when he first realized how much he needed her in his life. She is spunky, sassy, drop-dead gorgeous, and can make a hell of a drink if you get her at the right time. Still, the biggest reason that he hasn’t pursued Rowan isn’t because she is a hell of a lot younger than he is, but because she is his best friend’s little cousin. You don’t mess with the club president’s family. Ever.

Working in a place like The Bar is nirvana to her. It’s too bad that she hates her boss and his skanky mistress. No, Rowan loves the work she does. Nothing can ruin the happiness she’s found there, not even Mona and Jake, the owner of The Bar. The only bad part of working there is the knowledge that Blaze, and the other Silver Devils, come into The Bar often. After all, she’s been in love with the man since before she hit puberty. No, life is good—until it isn’t. And Rowan can’t even tell her cousin and his club the reasons…

“So, you seeing what I’m seeing?” I asked Tech as I lined up another shot. I was beyond pissed off at the moment and I was scratching every fucking ball that I aimed to hit, and it was all because of Rowan. She was so desperate to protect everyone around her that she forgot to protect her own sweet, perky ass.

“I sure am. Damn the little woman does have some spitfire in her, doesn’t she?” Tech asked and took a swig from the beer that Rowan had brought us. “I can see why you are all so protective of her.” I saw Tech look at me with that calculating look in his eyes.

Oh, hell no, I couldn’t let him know just how she affected me.

“She’s Stone’s cousin. What else do you expect? She’s made of steel and tempered in hell, so of course she’s got a spine to her.” I hoped that would be enough to get Tech off my ass long enough for me to figure out how the fuck to best protect Rowan without getting Stone on my ass, too.

“It wouldn’t be so bad if it wasn’t Hector Juarez that was currently eyeing her like she was his next meal,” Tech said and took his next shot. “You do realize that this complicates shit, right? The Scorps are on our turf, Stone is going to have a shit fit, and it’s going to mean war if the fucker isn’t in here for just a drink.” Leave it to Tech to state the utter obvious.

“I fucking know,” I growled at him and looked back to Rowan once more. The bastard had touched her, and I still couldn’t get over that fact. That fucker had touched what was mine, and she had let him. I had to pull back from that dark place inside of me because I knew I had no right to call her mine when I hadn’t even really admitted it to myself. No, I needed to let her do her and simply live her life. Being with me would be too dangerous for her.

“We should call or text him and let him know. You know as well as I do that he’s going to be even more pissed off that one of those bastards touched his cousin.” There went Tech stating the perfectly fucking obvious once more.

I looked up at my friend and slammed my hand on the pool table hard enough that the balls jumped. “I. Fucking. Know.”

God dammit, everything about this situation was in the shitter, and it pissed me off. I didn’t like the fact that Rowan was in the path of possible destruction, and I detested the fact that one of those fuckers felt that he had the right to touch her, even if she pushed him back after. The fact of the matter was he felt he had that right because she didn’t have a protector, and that was something that couldn’t continue.

“Right now, all I can see is that fucker touching her, so you call him,” I told my friend. I usually didn’t pass anything off, especially when it dealt with calling the boss, but right now all I could see and think about was that asshole touching Rowan and the way that she kept trying to get us out of the bar. There was some shady shit going down, especially if a Black Scorpion felt that he could walk right into this bar and looked as if he owned the fucking place. This was Silver Devils’ turf and everyone knew it, so the fact that this asshole was here only confirmed the fact that Jake was playing fast and loose with the rules that he had been given so long ago.

“God damn, if I didn’t know any better, I would think you were laying claim on her. You are acting like Stone did when he met Ava. What the fuck is wrong with you, man?” Tech asked with a frown.

“She’s fucking mine, and no one touches her.” I said the words before they even registered in my brain. I couldn’t believe that I had come right out and said those words when I hadn’t intended to say jack shit about Rowan and how possessive I was feeling about her.

Rowan has always been Blaze&#039;s. But with danger surrounding her, Can Blaze &quot;man up&quot; and accept his fate? I enjoyed seeing Blaze accept what he has always felt about Rowan. Even when she was too young he knew that she meant something to him, something strong and lasting. I love that it took danger and a threat to force Blaze to accept his feelings. But can he convince Rowan? Rowan has always wanted Blaze. But she wants him safe more. She will do whatever is necessary and has to protect those she loves...and that includes Blaze. Can Rowan accept that Blaze doesn&#039;t need her protection? This story by April Zyon is a well written enjoyable read. Blaze and Rowan must learn to accept each other flaws and all. I love that Ms. Zyon allowed both to really &quot;see&quot; each other. They need to look beyond their fears in order to find their happily ever after. I enjoyed the love that is obvious and the chemistry that burns the pages. I enjoyed returning to this world and hope Ms. Zyon will return in the future.

Blaze has loved Rowan for awhile now but he kept himself away because she was too young and she was the Prez&#039;s cousin. Rowan has a thing for Blaze but doesn&#039;t think he cares so she keeps going on with her life. While at the job that she hates, she witnesses something that could get her killed. This was an intense read and some parts are not for the faint of heart. When these two finally connect, it&#039;s really hot but can Blaze and his MC brothers find Rowan when she&#039;s kidnapped? The emotions are there and you can feel them as Blaze makes his way to rescue the woman he loves. Awesome story!!! Now I need the next book!!

The Royal Mate by April Zyon

The Kodiak's Mate by April Zyon