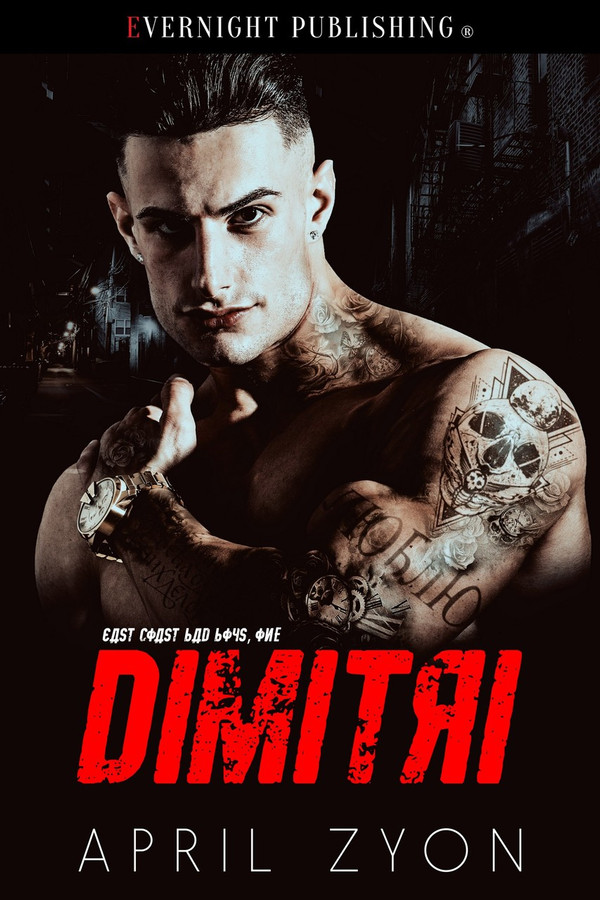 Russian mafia boss Dimitri Dudikov thought he had everything he'd ever wanted, until he met the one woman he couldn't walk away from. Can a man used to getting what he wants learn to compromise? And can the daughter of an enemy ever have a place in his life?

All her life, Scarlett Vanderwall has played her part. Being the good girl gets old fast, though, and Dimitri can take her body to places she's never been. Scarlett thrives under his dominance. But Dimitri has made too many enemies, and his newfound love has just become the biggest target in a game that threatens to break every rule.

She was stunning. The woman that cut across the ballroom like the wind on a cold winter morning in Russia was beyond beautiful and had my attention the moment that I walked into the ballroom with Susan Malloy on my arm. Susan was one of many women I took out when I had to come to one of these functions—one of the suitable women I could take out and not the typical whores that I would fuck and leave. The woman in the ballroom was a goddess, with her blonde hair that looked to be very thick and her blue eyes that met mine without any sort of fear in them. She was perfect. She was what I had been looking for all my life, and she was here among the most elite of them all. Who was she?

When her gaze turned cold, I couldn’t figure out why. I wondered for a moment what I had done. Then I realized how heavily Susan was leaning into me, how she was looking up at me with adoring eyes. Well, that was just not going to fucking work for me. Susan and I had an arrangement. I would bring her to these functions, and the bitch would benefit from my protection and money. She would also benefit from my enforcers’ fuckings as well. She enjoyed being taken by them. She needed to be reminded of that arrangement, obviously. I watched as the ice queen that I was going to make mine disappeared into the ladies’ room, then turned my anger to Susan. “Just what the fuck were you doing placing your hands on me like you were? You know that you are not to touch me as you just did.”

I saw the fear in her eyes. “I didn’t want to let Miss Perfect think that you were available.” I heard the envy in her voice, the little cunt. She’d deliberately cut me off from that woman. I wanted to wring her neck.

“Who is she?” I asked instead with cold and deadly intent. Susan had no idea just how fucked she truly was. I was cutting her off from everything. She just didn’t know it yet.

“The rich bitch who walked past and gave everyone the cold shoulder?” Susan winced when I gave her a squeeze and simply lifted my eyebrow to her. “Scarlett Vanderwall. She’s part of one of the oldest families around.”

Interesting. Vanderwall. I had never been able to buy off any Vanderwalls, no matter how many times I tried to get them. Hell, I couldn’t even get any dirt on them. They seemed to be the cleanest family I’d ever met and that was saying something. I’d never met a family that I couldn’t either own through buying or blackmailing before the Vanderwalls. “Interesting. And do you know their family well?” I asked Susan.

“No, not really. I went to school with her older brother, Vincent, but I’ve always thought she was too prudish to ever outgrow the fat girl that she was,” Susan scoffed, turning her nose up at the woman when she came out of the bathroom.

“I seriously doubt that woman was ever fat,” I said as I watched Scarlett glide across the room and back to her table. I knew the men she was seated with. Four were her brothers, and the other three men were deviants that I had in my back pocket. If one of them so much as breathed wrong in her direction, I would take great delight in ripping his fucking balls off. My eyes narrowed as I took in Joseph Hunter. That little fucker I was sure had made a move on the woman I intended to make mine, and he would hurt the next time I saw him if I knew that he even touched her.

I looked over my shoulder and nodded to Ivan. It was time for us to leave. I wanted to gather as much information as possible about Scarlett Vanderwall. Also it was time to put Susan Malloy in her place. It was time to cut her ass off in the biggest ways possible. Yes, it was time for Ivan to bring the car around and to get the fuck out of this stuffy affair that I was required to come to once a year. Fucking society and their shitty rules that seem to dictate that I had to come to these sorts of functions because I had money.

Then again, I was happy that I came tonight and didn’t skip out on it like I had planned on doing. I had met the woman I was certain would be my everything. I knew from just one look in her eyes that she would be mine. I was a firm believer in the old ways, that you could see a person’s soul in their eyes and I saw hers. It was pure, innocent, and it was going to be mine. She was going to be mine. I should protect her and distance myself from her, but I was a greedy bastard and there was no way in fuck I would ever let her go now that I’d seen her. I may not have talked to her or met her, but she was going to be mine.

If you like mafia style romance books read &quot;Dimitri&quot;. Dimitri may be a bad guy to others but to the ones loyal to him, he&#039;s great! And when he sets eyes on Scarlett, that&#039;s it for him. Scarlett has been protected by her brothers and her parents all her life and has no intentions of settling down with anyone they pick for her. She can take care of herself. But when they meet you get fireworks. But life in their world is never simple. Someone tries to take her from Dimtri and ruin her happy ever after. This was a fast read and totally a guilty pleasure, on my part. This author always gives us a hot, steamy and sexy read and she doesn&#039;t disappoint in this book. It&#039;s always a pleasure to read a book by April Zyon. I recommend it to others who like this trope.

4.5 Stars Scarlett is one of the only daughters in the Vanderwall bloodline, she is precious and very protected. Dimitri Dudikov is head of the Russian Mob and is used to getting what he wants. But this time he will need to do more than take, he will need to fight for the woman he knows is his!! Dimitri is the first book in the East Coast Bad Boys and packs one hell of a punch. Death is part of his world, but when betrayal comes from within and targets want he cherishes most their will be no end to what Dimitri will do to get Scarlett back. Great read and one I will be recommending

Loved this book and the characters. Dimitri was ruthless and yet I loved that he recognized Scarlett was his everything immediately. He accepted it and really, he was the one chasing her but he never lost his edge. And Scarlett, she was feisty and strong. Everything about this book was great. I&#039;m looking forward to stories for Scarlett&#039;s 2 best friends as well.

I really enjoyed this....Dimitri may be dark, ruthless and utterly cold to other people, except his men that is. But, once he saw Scarlett, that was it. The way this world was built had me from page one.....I couldn&#039;t put it down. Had to find out what the heck was going on. Scarlett wasn&#039;t ready for Dimitri, she was always the good girl from the rich family. I could totally see why she was drawn to him. What happens when the man who doesn&#039;t take no for an answer meets a woman just as stubborn as him? Sparks people, sparks happen, and sexiness. When his past comes back to bite him in the ummm, behind.......will they be able to stay together? Is there a future for such a mismatched couple? I&#039;m hoping this is going to have more......more books, more stories.....teased me with the supporting characters, typical April Zyon, got me hooked again!

I thoroughly enjoyed meeting Dimitri and Scarlett in this new series from April Zyon. Dimitri is used to getting who and what he wants and Scarlett will be no different....or will she? Dimitri and Scarlett are so different. Scarlett has been protected and Dimitri is quite familiar with the underbelly of vice. But together they work. I love that Ms. Zyon gave Dimitri someone who can show him the good in himself and people as a whole. I love that Scarlett has someone who can see all of who she is and will be. This story is well written and full of unexpected twists which I thoroughly enjoyed. I look forward to returning to this world Ms. Zyon is building.

Oh wow! If you like mafia style romance books, you really need to get this one. Dimitri may be a bad guy to others but to the ones loyal to him, he&#039;s great! And when he sets eyes on Scarlett, that&#039;s it for him. Scarlett has been protected by her brothers and her parents all her life and has no intentions of settling down with anyone they pick for her. She can take care of herself. When the two of them get together, it&#039;s heaven. But there is someone who has his eyes on taking everything away from Dimitri, including the woman who means everything to him. Who is it and will he be able to save her in time? This was a fast read and totally sucked me into the story. It was hot, steamy and sexy!! The passion between Dimitri and Scarlett is obvious even though she tries to resist him for a long time. I really do want to see more stories in this series and can&#039;t wait for Vincent&#039;s story. It sounds like it could be VERY interesting!!!