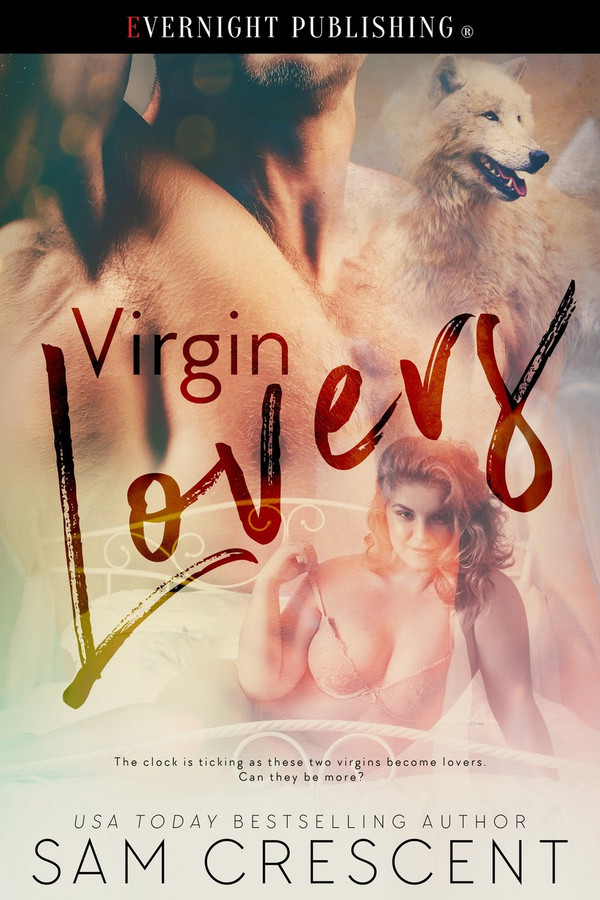 When Kelly wakes up in a forest with no recollection of how she got there, she knows she’s been picked by the pack elders to be mated. What she can’t believe is that they’ve assigned her a guy she can’t stand. Drake. The one guy who has spent his whole life making her feel like crap is there alone with her.

Drake has done everything to push Kelly away, and it was the biggest mistake of his life. He realizes that now, and this time alone means something to him. He has a chance to start over, to prove to Kelly that he’s the guy for her. Drake has a secret: the only person he’s ever wanted is Kelly. He’s a virgin—and so is she.

One year together. Alone, destined to be mates. The clock is ticking as these two virgins become lovers, but can they be more? Is there more than a physical connection between them? Or is that all they can ever have?

Drake was trying to focus on the book in his hand, but he was distracted. The island where they were had a nice little free flowing waterfall. He wore a pair of swimming boxers, and the costume that Kelly was wearing kept distracting him.

They had been alone now for one week. One week of walking through the forest together, playing the odd board game they had found, watching some movies, and then of course eating dinner, sleeping together.

Those rare moments in the late hours of the night were his favorite. Kelly always fell asleep before he did, and as such, he got the chance to watch her sleep, and to be himself. He’d reach out and stroke the hair from her face, and just bask in the time she wasn’t cursing at him. She had every right to. He’d been a horrible bastard to her.

She didn’t snore, and she looked so peaceful in sleep.

“What are you doing?” he asked, seeing Kelly on one of the rocks that was protruding out of the water.

“Playing around. Jumping from rock to rock.”

“You know you’re going to hurt yourself. It’s not fucking funny.”

His heart jumped as she did. Her arms went straight out, balancing.

“It’s fine. I’m not going to hurt myself, see.” She jumped again, and this time any reading he intended to do was done. He ran into the water, and stood in front of her, holding his hands up to stop her from making the next jump.

“Hell no. I don’t know if we can have medical assistance here, and seeing as we can only heal during a change into wolf form, I’m not willing to risk you trying to tear my heart out.”

“I mean it, Kelly. I won’t let you risk your life like that.”

She rolled her eyes and folded her arms. “Are you for real right now? You’re going to be a buzz kill.”

Climbing onto the stone, Drake stared at her. “I’m right here. You want a buzz, let’s have a buzz. You’ve got five seconds’ head start or I’m coming for you, and when I do, I’m going to kiss that smart mouth.”

“This is not even funny. You’ve been reading your damn book!”

Sam Crescent proves paranormal can be plus size heroine paradise with this sweet and sexy short. Drake has tormented Kelly for as long as she can remember and he&#039;s made her feel awful about herself. I think she handles her situation much better than I would have. I believe I would have kicked him where it would hurt the most. While I appreciated why he acted the way he did I can&#039;t say I wouldn&#039;t have made him suffer a little more than she did but that&#039;s why Kelly is such a nice girl. I enjoyed that they both try to make the best out of being basically stranded together and how the relationship builds. I loved how the author handled the curiosity and the awkwardness with a gentleness that brought happy tears to my eyes and some humour that lightened what could have been some heavily emotional moments. I also enjoyed that I got to see their relationships with their family not just through their eyes but through my own. This was a swift read and I would have liked to see the ending show a little more but if you like your curvy gal stories with a paranormal twist this is one to pick up. The Story: Kelly can&#039;t believe the fates could be so cruel. How can anyone possibly think she and Drake are mates and now they have to spend a year alone when all he&#039;s ever done is turn his nose up at her. Drake has always been attracted to Kelly but he didn&#039;t want anyone telling him how to live his life. So now he has a year to convince her they belong together.

I enjoyed everything about this love story. The past they shared was hard but they overcome it. Learning he has always wanted her was beautiful. Their love was amazing.

Virgin Lovers is a such a delight to read. Sassy Kelly gives as good as she takes from the hateful but sexy Drake. Destined to be mated their story is very hot

Five stars plus! This is a super sweet romantic read that I loved every word of! Even if you are not a fan of shifter reads do not let that deter you as these two lovable characters didn&#039;t shift or leave their wolves to figure things out. And there wasn&#039;t any additional characters to cause distractions either this lovable story is all about the Hero Drake and the Heroine Kelly. After years of believing they actually hated the other or that the other hated them these two beautiful souls are brought together to live for a year on an island that only holds the two of them. During this time they need to iron out their differences, fall in love, build a bond and mate for life and beyond. At first both are uneasy with the situation until they realise that they are exactly where they are supposed to be and with exactly who they are meant to be with. This super sweet and sexy read was perfection from start to finish I didn&#039;t want it to end! At first Drake is not the most likable character but before long just like Kelly we are falling for him as he proves to his mate Kelly and to us that he is one of the most romantic and lovable guys you will ever meet. Totally swoon worthy! I really do recommend this book and would definitely read it again I loved it that much and I have no doubts you will too! Happy Reading!

I loved the Virgin Lovers!! Lol Drake and Kelly were a dream couple!! What I wouldnt give to have that, to go away with just my mate to get to know each other!! A quick super sweat read to get you through your day!! I love it... I hope there is more like this!!

It&#039;s a great shifter romance for a quick read. Especially for safety lovers. It has no dramas, no ow/om and both h and H are virgins. You may want to kick Drakes a$$, tough. But only for a second or two. It&#039;s because we are told how he was a d*** towards Kelly and just because he was sick of his parents talking about him and Kelly being toghter, even though Drake had feelings for her. It was actually very silly of him. Fighting against his dreams. Then I guess, lucky for him elders took it in their own hands. Otherwise who knows when Drake would have pulled his head of his a$$, if ever. And after he was forced to pull it out, Drake was really likeable hero. Possessive and protective. He for sure will make Kelly really happy girl.

His Virgin Angel by Sam Crescent